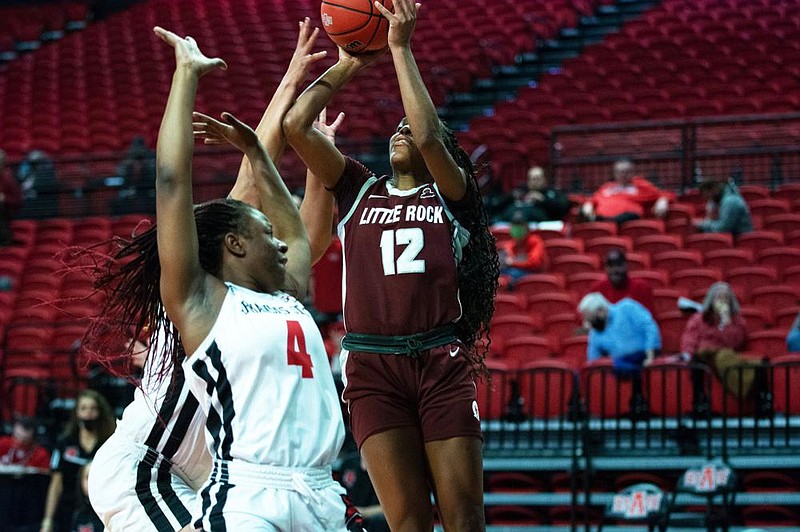 The University of Arkansas at Little Rock women's basketball team shot 42.9% (6 of 14) from three-point range, hit 18 of 19 free throws and had five scorers in double figures, shooting past Arkansas State University 70-63 at First National Bank Arena in Jonesboro on Friday night.

"I just hope it's not a one-night deal," UALR Coach Joe Foley said. "I hope it's a thing to come. And if it is, and people keep playing all these zones, they'll be switching their mind a little bit before long. I'd like to be able to play that well against the zone every night."

Red Wolves junior Karolina Szydlowska went 6-13 from the field and scored a game-high 17 points, followed by redshirt junior Jada Stinson, who finished with 15. ASU shot 42.9% (24 of 56) as a team and outrebounded the Trojans 32-31, but turned the ball over 18 times resulting in 20 Trojans points. UALR matched a season-high with 11 steals.

"I didn't think we competed very hard tonight," ASU Coach Matt Daniel said. "I thought we were soft. That's not typical of who are."

The teams meet again at 2 p.m. today in Little Rock, 22 hours after Friday's game tipped off.

"That's not fair to the kids," Foley said. "We're playing a six-man rotation as you can see. To have to go back and play this quick, I don't think the conference put a whole lot of thought into that."

The Red Wolves claimed an early 10-4 lead on back-to-back three-pointers by freshman Mattie Hatcher and Stinson, But riding 6-6 free throw shooting and a three-pointer by Scott, the Trojans emerged from the first quarter with a 13-12 lead.

Five points in the final 2:01 of the first quarter kicked off UALR's 16-1 run, capped by sophomore Angelique Francis' three-point play that put the Trojans ahead 22-13 with 7:10 left in the half. Francis finished with 8 points and 7 rebounds in 29 minutes.

A subsequent 9-0 run fueled by another Scott three-pointer and two baskets from Harvey gave UALR a 31-18 lead, its largest of the first half, and the Trojans entered the locker room up 33-24 following Caicedo's lay-up just before halftime.

UALR maintained the advantage in the second half, leading by as many as 17 points. Two late three-pointers by Szydlowska cut the Trojans' lead to single-digits but proved too little, too late.

"It's the first time in 42 years coaching that I've played a game without practice the day before," Foley said. "Maybe we ought to do that a little more often. Maybe when I get away from them they play a bit better."