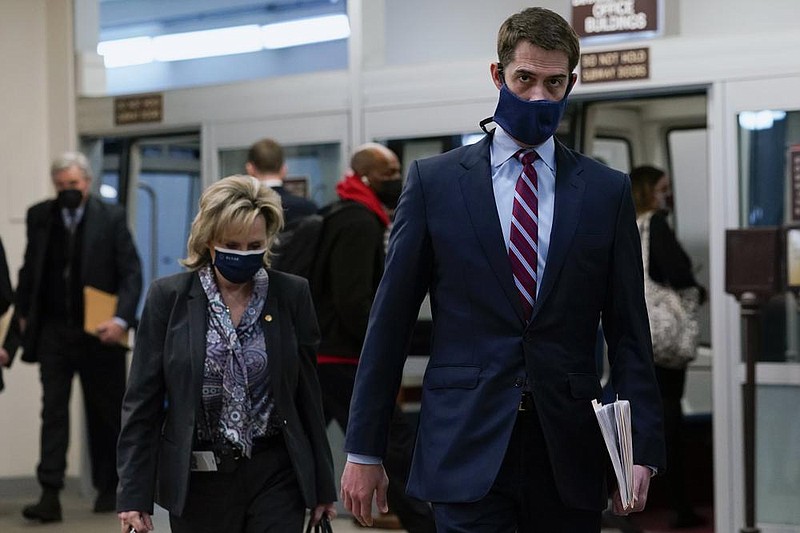 WASHINGTON -- When the U.S. Senate reaches a verdict on former President Donald Trump's impeachment, there's little doubt about how the two Arkansans will vote: Republican Sens. John Boozman and Tom Cotton have both argued that the proceedings are unconstitutional.

Most lawmakers have already signaled how they plan to vote. Sen. Bill Cassidy, R-La., however, appears to genuinely be undecided.

Like most of his Republican colleagues, the 63-year-old physician initially signaled that the Senate lacked jurisdiction to try a former president.

After hearing arguments Tuesday, however, he changed his mind, voting to continue the trial.

The House managers' arguments regarding constitutionality had been more persuasive, he said.

Since Tuesday, he has faced pressure from his constituents, with the East Baton Rouge Parish Republican Party voting to censure him.

In recent days, observers have paid close attention to Cassidy, trying to determine which way he will go.

On Friday, Cassidy was photographed by The Washington Post holding a statement announcing that he would vote to acquit.

"The events of January 6 are a stain on our country. President Trump and many others certainly contributed to the environment. The former president did engage in excessive and unnecessary rhetoric before and after the election," the document stated, in part. "However, the House Managers did not connect the dots to show President Trump knew that the attack on the Capitol was going to be violent and result in the loss of life."

Asked for comment, Cassidy told reporters that he remains undecided; a draft "going the other way" has also been prepared, he said.

On Friday afternoon, Cassidy was pacing back and forth toward the back of the Senate chambers as impeachment managers and Trump attorneys answered questions about the case.

Reaching the wall, he reached out and touched one of the marble pillars. On one occasion, he leaned his head against the pillar and appeared to close his eyes.

Most of the time, the somber-faced senator kept his eyes on the carpet as he listened to the proceedings. He fiddled with a pen for awhile, then folded his arms and grabbed his glasses off his desk but did not immediately put them on, instead tucking them in a pocket.

Speaking with reporters, Cassidy expressed particular concern that Trump had attacked then-Vice President Mike Pence on social media while the Capitol was being stormed by insurrectionists.

"The president surely had knowledge at that point. And then the tweet went out," he said.

Those facts aren't coming from liberal publications, he said. A Trump supporter, Sen. Tommy Tuberville, R-Ala., has acknowledged telling the president about Pence's evacuation from the chambers that day, Cassidy noted.

The Louisiana politician said he looked forward to hearing both sides address that topic.

"How would you explain that away, if you're going to explain it away?" he wondered.

Asked how his constituents might respond to his final vote, Cassidy told the Arkansas Democrat-Gazette that he's viewing the decision through a different lens.

"My priorities are my country, the Constitution and our future," he said. "That's what I was elected to do."

"I can't speak for other people, but if the terms of the debate are what is good for our country, our Constitution and our future, I'm okay with that," he said. "Whatever happens, happens."

Once that's over, the Senate should shift its focus, he said Friday.

"I think next, we need to start considering the situation we have with covid and the economy," he said.

The priority needs to be "conquering the disease and then seeing how we can help those that have really been devastated by the economy as a result of covid," he said.

"[There are] big important issues to focus on throughout the country," he said.

Cotton, who declined to answer questions about the case Wednesday and Thursday, rejected another request for comment Friday.

A spokesman said the senator would answer questions once the verdict was in.