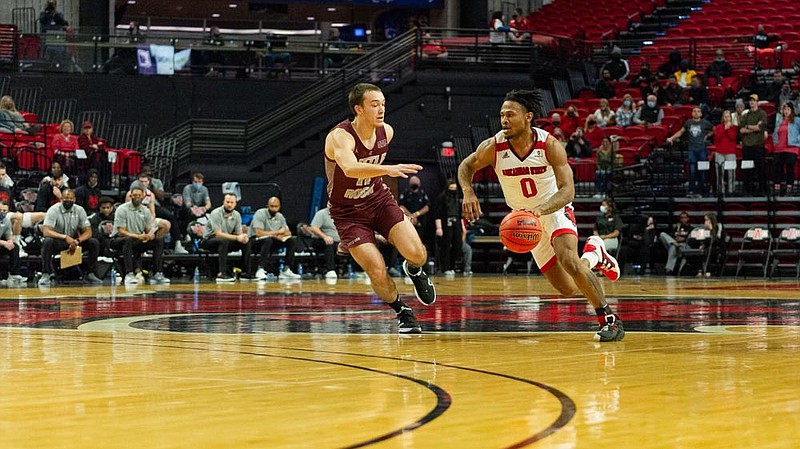 The Arkansas State University men's basketball team manhandled the University of Arkansas at Little Rock in the first half of Friday night's 73-62 victory over the Trojans at First National Bank Arena in Jonesboro.

The Red Wolves shot 53.8% (14 of 26) from the field in the first half and dominated UALR inside, outrebounding the Trojans 18-11 and limiting the interior duo of Ruot Monyyong and Nikola Maric to a combined six points and three rebounds before the break.

While the frazzled Trojans made only nine of 24 first-half field goals, ASU got 17 points from its bench alone on 7-of-9 shooting, tying together a rousing first-half effort that set the foundation for the Red Wolves' most comprehensive win of the season.

"Everybody that came in knew what they needed to do," ASU Coach Mike Balado said. "They executed the scouting report. They didn't get nervous. They didn't allow runs to bother them. They stayed the course and pulled out a victory."

Red Wolves guard Marquis Eaton led the way with 17 points on 4-7 shooting to go with eight assists, and forward Norchad Omier registered his 11th double-double of the season with 11 points and 11 rebounds. Caleb Fields finished with 13 points and six assists.

"You talk about two guys [Eaton and Fields] that scored 17 and 13 -- 30 points between two guys -- but yet they dished out and accounted for another 14 assists, a minimum of 28 points," Balado said. "Those two guys kind of make us go."

Nine ASU players scored , including eight in the first half when the Red Wolves used two double-digit scoring runs to build their lead.

Malcolm Farrington (eight points, three rebounds) hit a field goal and two three-pointers over a 2:39 stretch in the first half, and his eight points sprung ASU on a 13-2 run that put the Red Wolves ahead 21-9 after Omier's jumper with 9:42 remaining in the half. Minutes later, five different ASU scorers fueled a 12-0 run capped by a fast-break score by Fields, and the Red Wolves held a 35-15 lead, their largest of the half.

Ben Coupet Jr. led the Trojans with 22 points on 7-of-11 shooting, and Monyyong recovered from a quiet first half to close out with 11 points and 13 rebounds. Maric struggled throughout, finishing with six points and a lone rebound.

UALR rebounded in the second half when it shot 59.1% (13 of 22) from the field. But for the second consecutive game, the Trojans were undercut by a dismal first half. UALR hit just 2 of 9 three-pointers and had only one player (Coupet) score more than four points before halftime.

"They have to make shots," Trojans Coach Darrell Walker said. "We work on shooting probably more than anybody in the country now. There's only so much a coach can do. I can't go out there and shoot.

The Red Wolves responded with two free throws by Omier and a three-pointer by Eaton as the gap stretched to 19 again. The Trojans only drew within single digits in the closing 90 seconds.