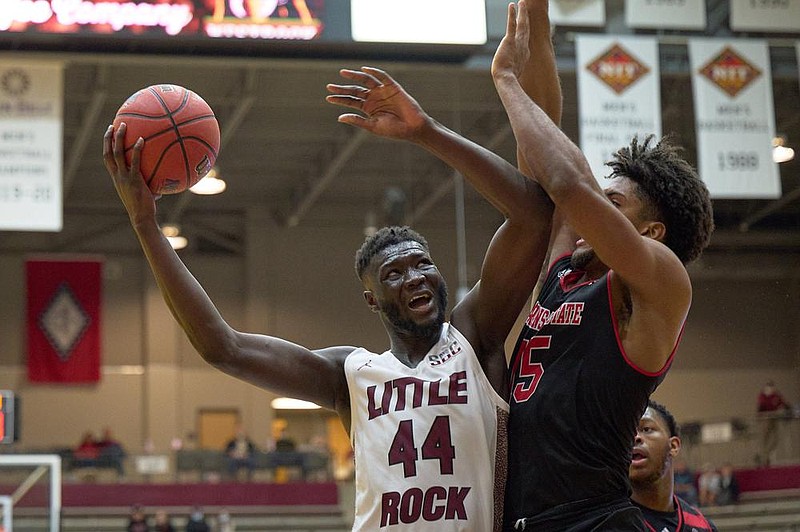 With the shot clock turned off and the game tied at 65-65, Ben Coupet Jr. blocked Marquis Eaton's shot and gave the University of Arkansas at Little Rock a chance to win a game it once trailed by 17 points.

The loose ball flew toward UALR's Nikola Maric, but with his back turned to the play, the ball instead landed into the hands of Arkansas State University's Antwon Jackson, who found Red Wolves guard Christian Willis on the baseline for the game-winning jumper with 12 seconds remaining in a 67-65 victory Saturday at the Jack Stephens Center in Little Rock.

"Antwon got the rebound, he looked at me," Willis said. "I knew he had to get a shot up at the rim so I just took a couple dribbles, got to my spot and I shot it."

ASU (10-9, 7-5 Sun Belt Conference) survived a ferocious second-half comeback attempt from UALR that included a 19-2 run, and held on to hand the Trojans (10-11, 6-8) their fourth loss in a row in completing the weekend sweep. Eaton scored a game-high 25 points on 8-of-14 shooting, leading a 55.1% Red Wolves shooting performance. Willis scored 12 points and contributed 5 rebounds and 4 assists.

The Trojans trailed 47-30 in the second half when ASU's Avery Felts, who scored eight points, hit one of his 3 three-pointers with 13:55 remaining. Two consecutive three-pointers from White sparked the 19-2 UALR run -- over a 5:02 stretch -- and another three-pointer by White handed the Trojans a 54-53 at the 7:40 mark, their first lead of the game. The second-half surge was nearly enough to keep UALR from falling below .500 for the first time this season, but Trojans were again hurt by a poor first-half shooting effort, when they shot 10-27 (37%) from the field.

While the Trojans struggled from the field, ASU appeared comfortable in the road arena, shooting 55.1% in the first half.

ASU guard Caleb Fields exited the game with an ankle injury, and without the other half of his guard tandem, Eaton played 19 minutes in the second half.

"What a phenomenal game," ASU Coach Mike Balado said. "That kid was a warrior. Without Caleb Fields out there he played the entire second half against the press. Just an unbelievable game by that kid. He's having a great month."

After White gave UALR the lead with 7:40 left, ASU responded with a 9-2 run that featured baskets from Jackson, who had seven rebounds to go with four points, and Willis, and a three-pointer by Malcolm Farrington, restoring a 61-56 ASU advantage.

The Red Wolves emerged from a timeout and with 12 seconds remaining. Coupet Jr. bested Eaton in a one-on-one match, swatting his shot toward the basket and ultimately into the hands of Jackson. The ASU forward then found Willis along the baseline who sent the Red Wolves home with a pair of victories over their in-state conferences foe.

"When it got to C-Will, right when it got to him, I knew it was going in," Eaton said. "If you look at it, I'm just getting back trying to play D. I knew the shot was going in. He always hits that shot in practice." 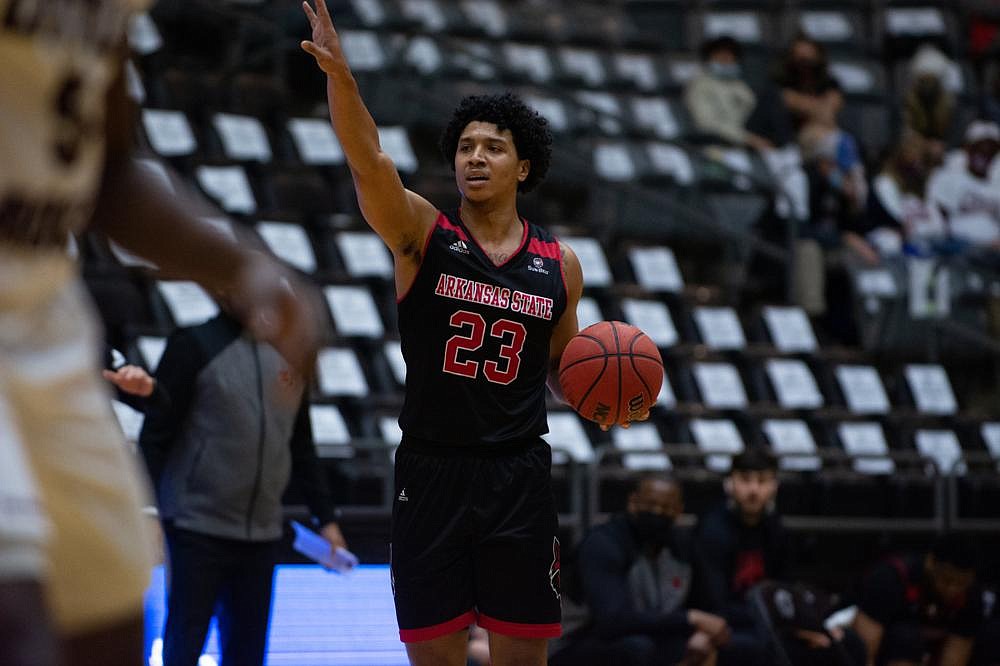 Arkansas State guard Marquis Eaton scored 23 points on 8-of-14 shooting to lead the Red Wolves to a 67-65 victory over UALR on Saturday at the Jack Stephens Center in Little Rock. (Arkansas State/Miya Garrett)
ADVERTISEMENT