Why do we celebrate Valentine’s Day? I really wasn’t certain, so I did some research. There are quite a few theories, but most seem to focus on one of three saints named Valentine. Two of them were put to death by Emperor Claudius II, one for circumventing the law preventing young men from marrying, (which Claudius thought lessoned their prowess on the battlefield) and kept marrying them in secret. Thus, he became the “saint of love”. Another theory is another Valentine who became imprisoned for helping Christians escape prison. When imprisoned himself, he fell in love with someone who visited him in prison. Before his death, he wrote her a letter signed “from your Valentine”, which sentiments lingers today. Yet another theory had a Valentine involved with a blind girl whom he allegedly healed. There are even tales of a Valentine cutting out paper images of hearts that he would give to soldiers to remind them of their commitment to God and Christianity.

Whoever was the namesake, Pope Gelasius declared February 14 as the official Valentine’s Day back in the 5th Century. It supposedly honors the day Saint Valentine was beheaded! Not too romantic!

It is believed that the first-ever Valentine’s Day card was originated in France, when Charles, the Duke of Orleans, sent love letters to his wife from prison in 1415. By the middle of the 18th century, handwritten notes and other signs of affection was a common Valentine’s Day custom in England. As printing technology improved, handwritten messages soon gave way to ready-made cards. This practice reached America in the 1840s when Esther Howland, a student at Mount Holyoke Female Seminary, decided she could make cards as pretty as the British ones. 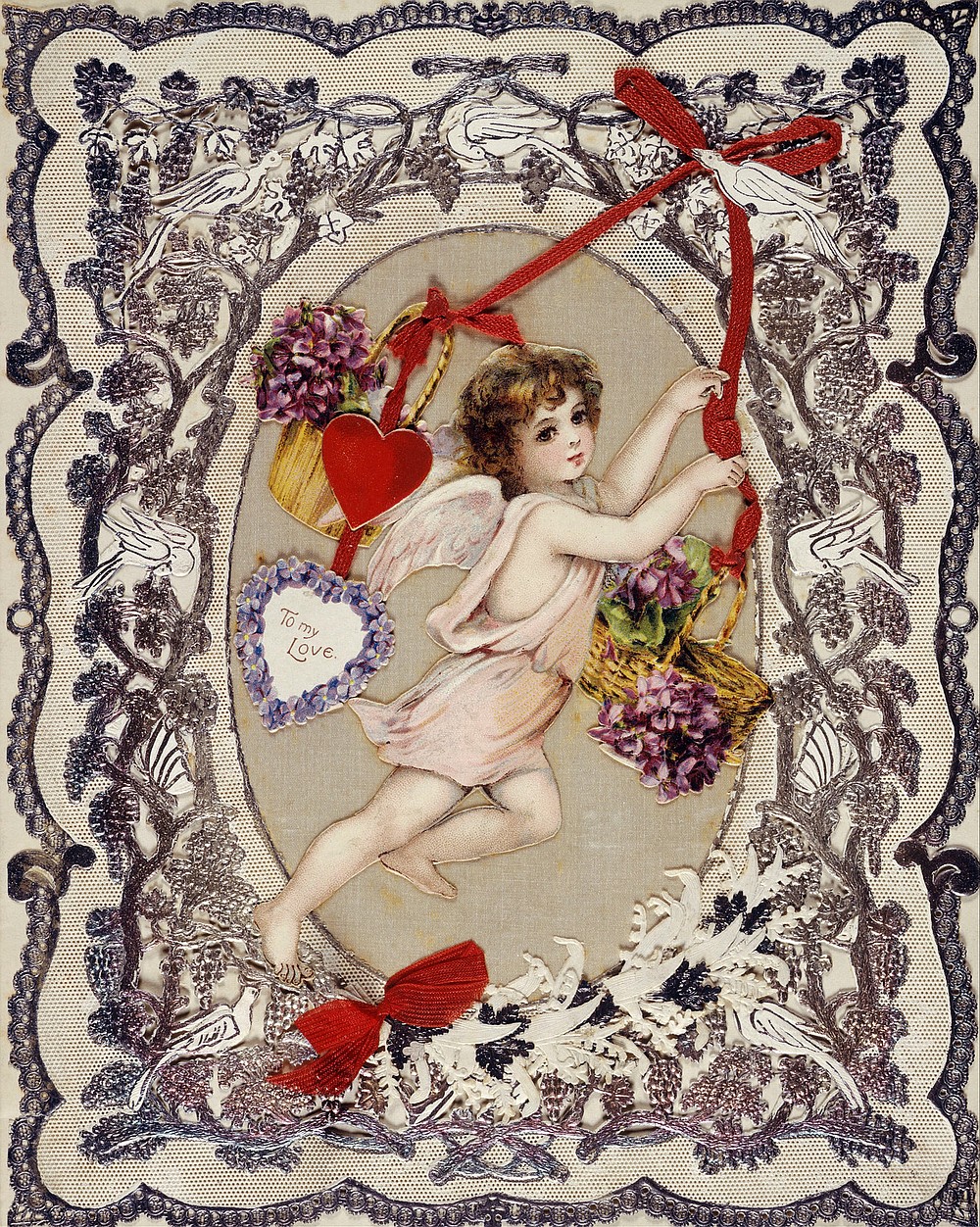 She started the New England Valentine Co. and became known as the “Mother of the American Valentine.” Now, approximately 114 million cards are sent out each Valentine’s Day.

The rose became the flower of valentine’s day because of its affiliation with Aphrodite, the goddess of love. It is said that the rose bush grew from the tears of Aphrodite and the blood of Adonis, her lover. The tradition of giving Valentine’s Day flowers dates back to the late 17th century, during the reign of King Charles II of Sweden. During a trip to Persia, King Charles II was exposed to a new art—the language of flowers. The color of the roses given had great significance. Red is the symbol of love. Yellow roses symbolize either friendship and care, or jealousy and greed. Lavender – fascination and adoration; Pink – admiration and appreciation; White – innocence; new beginnings, remembrance; Peach – thanks and gratitude; Orange – Passion, Energy and fascination; Green roses – best wishes, harmony; Blue roses -mystery and illusion, desire; Black roses – mystery or elusiveness; Multicolored roses – happiness and joy. Clay covered all his bases this year! 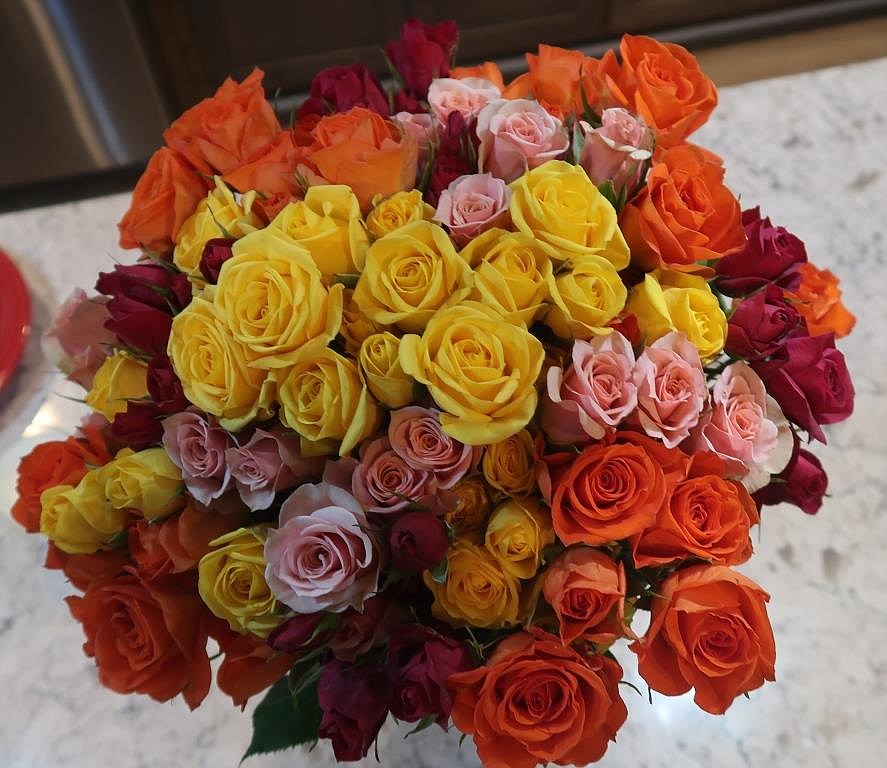 The custom of sending treats seems to have been comes from the United Kingdom and might be associated with a legendary character named Jack Valentine, who would supposedly knock on the back doors of homes and leave treats for children in Norfolk.

As to Valentine chocolates, 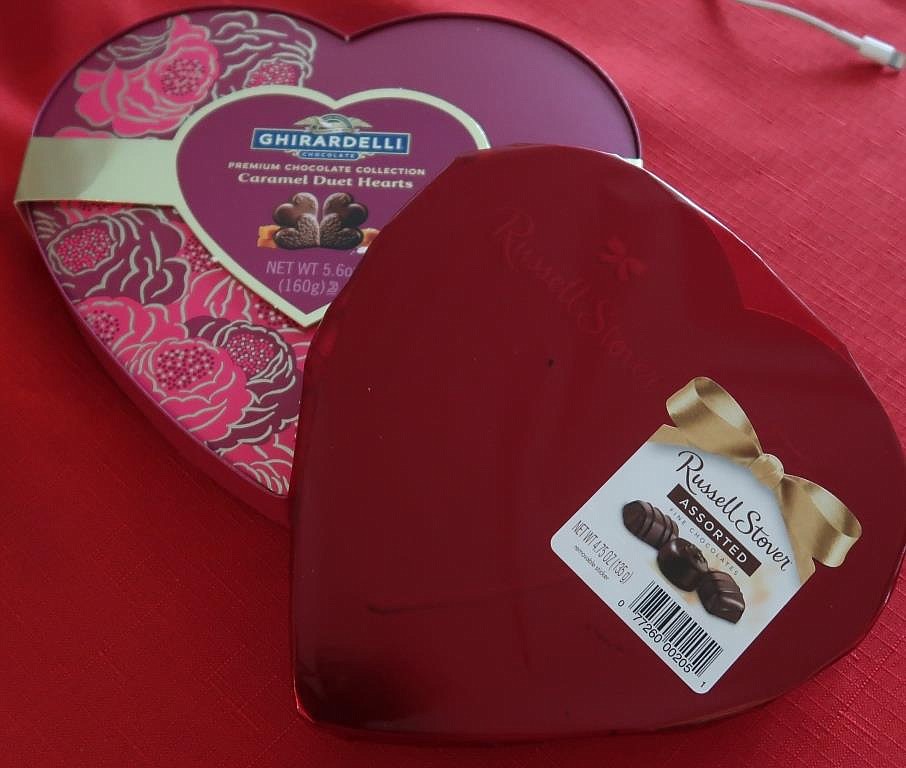 we can thank Richard Cadbury. After he and his brother took over his family’s chocolate manufacturing business in England in 1861, he discovered a way to extract pure cocoa butter from whole beans and added it to the company’s chocolate drink. The process produced more cocoa butter than expected, so he put it into “eating chocolate”. Then, Cadbury started designing beautiful boxes for his new chocolates, including special Valentine’s Day ones with cupids and roses. It’s believed that he made the first heart-shaped candy box, even though he didn’t patent it.

Candy hearts date back to the days of the American Civil War, when candies called “cockles,” were popular. Similar to fortune cookies, these treats were shaped like scallop shells and contained paper messages. Daniel Chase, whose brother Oliver founded the candy company NECCO, came up with the idea of printing catchy sayings right on the candy. In 1866, NECCO started churning out miniature candy hearts, then called “motto hearts.” 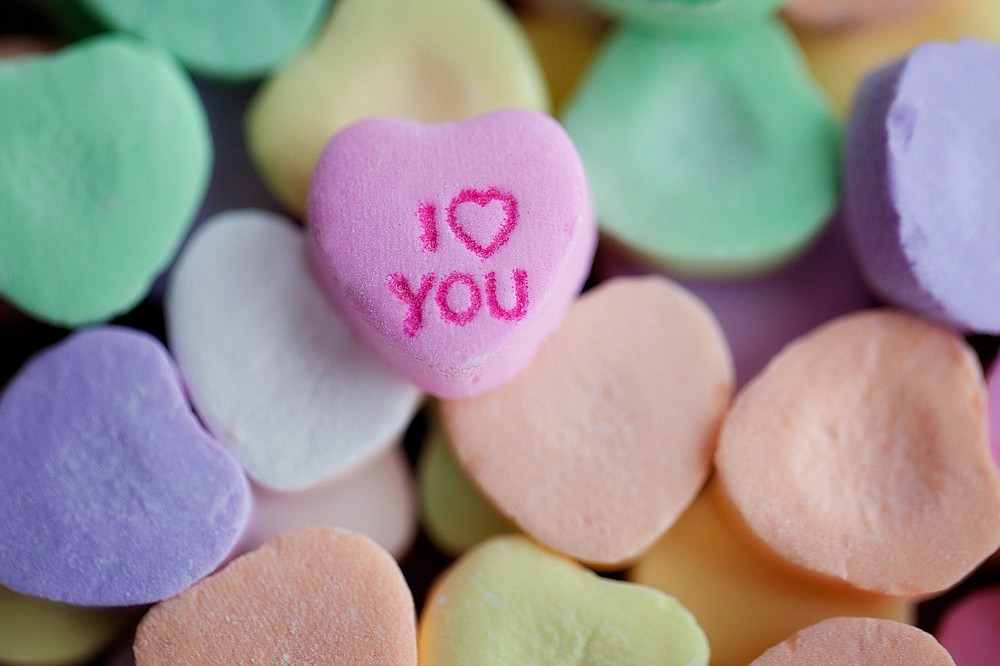 Valentines day is celebrated by countries all over the world in different ways. So, it is not one of those “Hallmark” holidays, but steeped in some unusual history. However you celebrate, Happy Valentine’s Day!