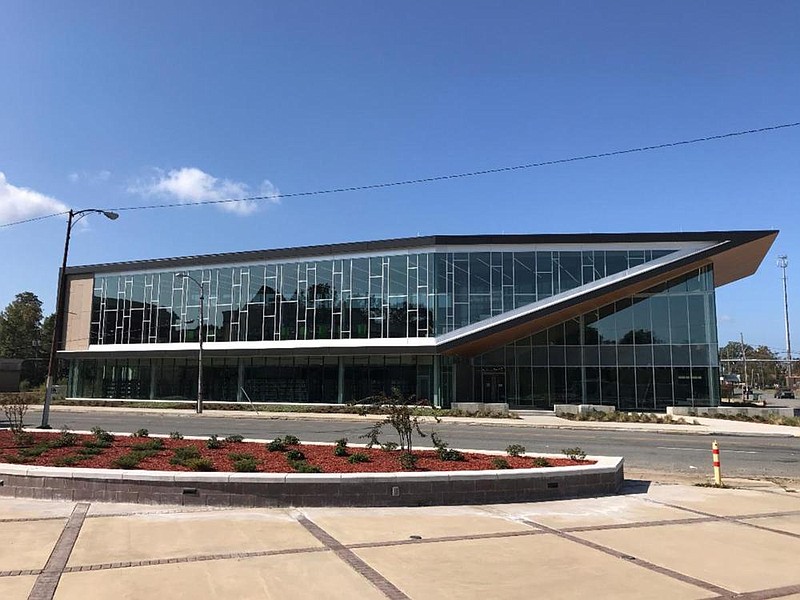 The headline atop the Arkansas section of this newspaper in December 2015 said it all: "Collapsed-building cleanup in downtown PB on slow track."

For years, it seemed that the only news coming out of Pine Bluff was bad news. At the time that 2015 story ran, parts of Pine Bluff literally were falling down.

"Contrary to earlier reports by Pine Bluff leaders, it will be well into 2016 before Main Street reopens between Fourth and Fifth avenues downtown," the story said. "The street was blocked off in February after the former Band Museum building and a former VFW post collapsed. The roadway partially reopened in the spring but was closed again in July after city engineers determined that two other nearby vacant buildings were in the early stages of collapse."

There were also crime stories. And stories about schools in academic distress. Don't forget stories about infighting on the city council.

Even the Pine Bluff entry for the Central Arkansas Library System's Encyclopedia of Arkansas was updated to note: "Pine Bluff's decaying downtown captured the spotlight after several buildings collapsed along the Main Street corridor, starting in 2014. On Feb. 20, 2014, the former JCPenney building, more than a century old, partially collapsed and had to be demolished. By March 2015, four buildings had collapsed wholly or partially, and in July 2015, the city closed off part of Main Street out of concern that the Kahn Building might also collapse.

"Many buildings in the downtown area stand empty and in need of repair. One of the most prominent of these derelict buildings is the Hotel Pines on Main Street, which was among the finest hotels in Arkansas when it opened in 1913."

Finally, the leadership of Pine Bluff had had enough. On the Monday before Thanksgiving in 2015, the city's leading citizens gathered in a Simmons Bank conference room and announced the launch of an effort to turn things around.

"I was born in Pine Bluff 59 years ago at Davis Hospital, which was located on what's now a vacant lot," George Makris, the Simmons chairman and CEO, said at the November 2015 meeting. "At that time, the area around the hospital was a vibrant hub of Pine Bluff. Things change. ... After years of ignoring change, Pine Bluff must recognize the changes that have occurred and begin to manage them for the future of the city and its citizens."

Makris is a realist. I was working for him at the time as a senior vice president for Simmons.

"We have a lot to overcome," he said. "We have three school districts within the city of Pine Bluff. All three struggle financially and academically."

Dozens of businesses had relocated through the decades, leaving vast unoccupied areas, including much of downtown.

"We must redefine parts of Pine Bluff, some of which may necessitate demolition to repurpose those areas," Makris said. "Pine Bluff has excellent infrastructure, which we cannot take advantage of without addressing these other issues. Tough decisions will be required. Elected officials will need to be committed and willing to stay on course as they allocate resources. There will be pain before gain.

"We can do it. The question is will we do it. I don't know the answer to that question. But I'm hopeful that a great plan will be developed and that we as a community will have the discipline to implement the plan."

That meeting, along with a large donation from the Simmons First Foundation, was the start of the Go Forward Pine Bluff initiative. The year 2016 was spent coming up with recommendations. Hundreds of Pine Bluff residents took part in dozens of meetings. The Institute for Economic Advancement at the University of Arkansas at Little Rock, led by Jim Youngquist, assisted in the process. In 2017, the implementation phase began.

"It's time for a comprehensive strategic plan that will guide this city into the next decade," Mary Pringos, the chairman of the Go Forward Pine Bluff task force and a member of the Simmons First Foundation board, said at the 2015 meeting. "For the plan to be successful, all sectors of the community must be involved in the planning process. What we don't want is a report that will sit on a shelf and gather dust. The objective is to produce a plan that the community buys into, one that establishes clear, measurable goals and has concrete steps for achieving those goals."

Tommy May, the Arkansas icon who was the Simmons Bank chairman before taking over the Simmons First Foundation, said at the time that Go Forward Pine Bluff would measure its success in four ways.

"The first will be our ability to recruit a fully inclusive planning team that has the capacity and desire to spend many hours during the next 12 months making recommendations that likely will result in significant change," he said.

"Second will be our ability to embrace the successes that came from earlier efforts and then focus our full attention on the difficult tasks that must be done to attract and retain jobs and families in Pine Bluff.

There's still work to be done. But looking back more than five years later, it's remarkable what has been accomplished.

In June 2017, a sales tax increase passed by more than a 2-to-1 margin. Proceeds from the five-eighths-cent tax produce about $4 million annually to help implement Go Forward Pine Bluff recommendations.

In 2016, voters had approved a property tax increase to construct a library in downtown Pine Bluff while also improving existing facilities at White Hall, Altheimer, Redfield and the Watson Chapel neighborhood of Pine Bluff. It's hoped that the downtown library will be the same kind of catalyst for development that the Central Arkansas Library System's main branch was for the River Market District in Little Rock.

The Little Rock architectural firm Polk Stanley Wilcox was hired to design the building. That firm had earlier done extensive work for CALS.

The 33,000-square-foot library opened late last year with little fanfare due to the pandemic. It's a stunning architectural addition to a street where buildings were collapsing a few years ago. It should spur additional growth downtown once the pandemic ends.

"The library at the intersection of Sixth Avenue and Main Street was designed by celebrated Little Rock architect Reese Rowland and surrounds itself with windows," Byron Tate wrote in The Pine Bluff Commercial. "It seems, with its sight lines, to invite the outside in. No need to rush to a door or window to see a winter snowfall. Patrons can see it from pretty much anywhere they stand."

The property tax increase will raise about $14 million for the downtown library and the renovations at Watson Chapel.

"There's little comparison between the new library and the one it's replacing, which was dark and dingy and flooded on occasion," Tate wrote. "The new facility, like the old one, will, of course, house all manner of media. But the new library is also a space for creativity. There are two sound recording studios--one for music and another for recording family histories and the like. And there will be a Mac lab, which can be used to create state-of-the-art music and art productions.

"Backing it all up will be an IT manager whose job will be to make sure the latest technology is available. ... Across the way, another feature not normally found in a library is a large teaching kitchen where the public can watch and participate in cooking adventures."

Across Main Street from the library is a new outdoor plaza and the University of Arkansas at Pine Bluff's Business Support Incubator. Also along that part of Main Street, the Arts and Science Center for Southeast Arkansas is renovating buildings for facilities known as ART Work and ArtSpace on Main.

"The library makes a positive impact on the architectural and cultural landscape of downtown," said Rachel Miller, the ASC executive director. "Its innovative design and accessible layout will influence future development and hopefully attract new visitors while continuing to serve existing patrons."

A streetscape program downtown has resulted in improved streetlights and wider sidewalks. The first phase of the effort redid Main Street from Barraque Street to Fourth Avenue. The second phase will cover Fourth to Eighth avenues.

"It's much more than a library," said Ryan Watley, Go Forward Pine Bluff's CEO. "It's a downtown game-changer. It's remarkable in terms of progress. Not long ago, we were dealing with crumbling buildings on Main Street. It's now an attractive area for investors who might want to move to downtown Pine Bluff."

There's also a $6.5 million aquatics center near the city's civic complex. Pine Bluff voters approved a bond issue and a five-eighths-cent sales tax for the aquatics center and other projects in a February 2011 special election. Now city leaders are hoping the next step forward in that area will be the renovation and reopening of the hotel that connects to the Pine Bluff Convention Center.

In September 2017, the Pine Bluff City Council voted to re-activate a long dormant urban renewal agency with the power of eminent domain and the ability to issue bonds. Pine Bluff first created an urban renewal agency in 1961 and disbanded it almost a decade later. The re-activated agency is now playing a key role in the revitalization of downtown and surrounding neighborhoods.

When the Go Forward Pine Bluff plan was released in early 2017, May, Pringos and Carla Martin wrote in the introduction: "Our community has been the talk of Arkansas, and the conversation is not flattering. The media have used words and phrases to describe Pine Bluff such as 'war zone,' 'a town full of crumbling buildings' and 'the worst place in America to live.' They have identified cities facing years of neglect, despair and desolation as the 'Pine Bluff syndrome.' ...

"It's time to put up or shut up. We truly believe that change is not only essential; we believe it is our last real chance to turn things around and to begin recovering from two decades or more of a downward spiral."

What a difference four years can make.

In summing up 2020, The Commercial noted in a Dec. 31 editorial: "A casino opened to great anticipation and fanfare. Medical buildings were planned and construction on them started. Several Jefferson County buildings had groundbreakings, as did the White Hall School District. A new jaw-dropping library opened. Businesses announced expansions and with them hundreds of jobs.

"Main Street, which just a few short years ago was blocked off because buildings had fallen and their bricks had scattered across the lanes, has now taken on a positively inviting look with the new streetscape, sidewalks and lights."