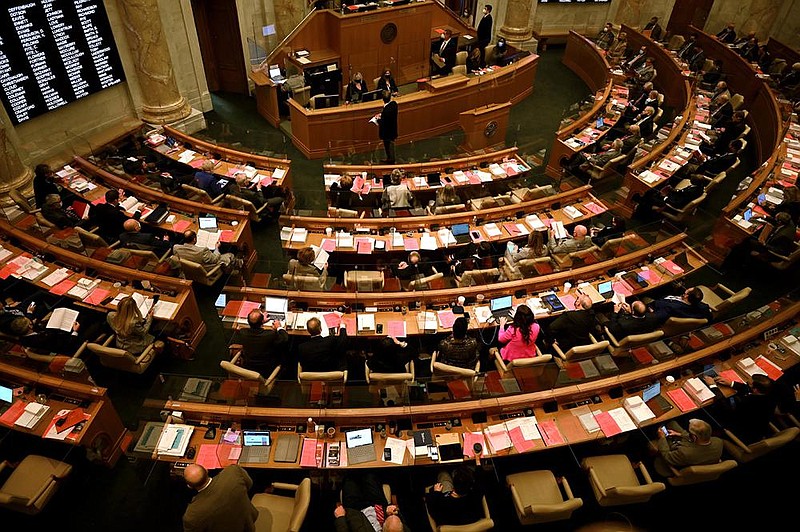 Members of the Arkansas House vote on a bill Monday. The Legislature is in recess until at least midweek because of expected inclement weather. (Arkansas Democrat-Gazette/Stephen Swofford)

The filing of more than three dozen proposed amendments to the Arkansas Constitution through last week kicked off a period of political matchmaking, as lawmakers seek to find the right issues to put before the state's voters.

Over the next several weeks, lawmakers in both the House and Senate will seek to whittle down the stacks of proposed amendments and select no more than three to be referred to voters in the 2022 general election.

It will then take a simple majority of votes by the people to add each amendment to the more than 100 existing amendments to the Arkansas Constitution, which dates to 1874.

Among 42 options before lawmakers are amendments that would curtail the powers of the governor and others that would give more powers to the Legislature.

One proposal would establish so-called "jungle" primary elections, while another would allow voters to recall elected officials.

There are proposed amendments dealing with bond issues for firetrucks, taxes for libraries and funding for public schools, while others aim to secure gun rights and religious liberties and the elimination of personal property taxes.

Republicans proposed nine different amendments related to limits on lawsuit damages or on the writing of court rules -- changes commonly referred to as tort reform -- as well as another to make judicial races partisan.

Democrats, who as the minority party have had little success referring their amendments in recent sessions, proposed constitutional changes that would eliminate unpaid prison labor, create new standards for rental housing and set up a commission for approving increases to the state minimum wage.

Pandemic restrictions at the state Capitol have limited discussions about what amendments are the early-on favorites, lawmakers said. Plus, a barrage of proposals just before the deadline -- including some "shell" bills that include little more than a title -- have also made the landscape difficult to judge.

"It's very rare when you're one of 135 [members], to have one of the three that's picked," said Sen. Alan Clark, R-Lonsdale, the author of six proposed amendments this session.

The House Republican Caucus met Tuesday to let members present their proposals to about 40 of their colleagues who attended, said Majority Leader Austin McCollum of Bentonville.

McCollum said a number of proposals were well received, including tort reform measures proposed by Reps. Jim Dotson of Bentonville and Lee Johnson of Greenwood.

Republicans "got giddy" during a presentation by Rep. Frances Cavenaugh of Walnut Ridge on an amendment to allow the Legislature to call itself into special session through a joint resolution by the House speaker and Senate president pro-tempore, McCollum said. Currently, only the governor may call the Legislature into a special session.

Compared with past years, McCollum noted the filing of a large number of amendments -- at least five -- that specifically address executive branch powers or giving more authority to the Legislature. Frustration among some Republicans with Gov. Asa Hutchinson's executive actions in response to the pandemic may have fueled the desire for amending those powers in the constitution, McCollum said.

"Whether that momentum continues or whether that's left over from last summer ... time will tell," McCollum said.

In a statement released through his spokeswoman Friday, Hutchinson said he was reviewing the amendments filed this week, but is not advocating any at this time. Unlike bills, amendments proposed by the Legislature are not subject to approval by the governor.

"I would be fine with no new amendments on the ballot, and I will oppose those that are designed to take away from the Governor necessary flexibility to manage during an emergency," Hutchinson said.

Tort reform measures are likely to see revived interest in both chambers, lawmakers said, after amendments placed on the ballot in 2016 and 2018 were struck down by courts before a vote could be held.

The first effort, in 2016, was a citizen-referred amendment that was struck down by the Arkansas Supreme Court because the sponsor failed to provide an appropriate definition of the "non-economic damages" for which caps were sought.

Two years later, the justices nixed a proposal by lawmakers, Issue 1, which they said illegally rolled into a single amendment the separate issues of capping lawsuit damages, limiting attorney fees and granting the Legislature the authority to amend court rules.

Of the nine tort-related amendments proposed this session, five deal with the authority to write rules of pleading, practice, procedure and evidence in state courts.

Identical amendments filed in the House and Senate -- each with more than a dozen sponsors -- would allow the Legislature to set caps for both punitive and noneconomic damages in personal injury or wrongful death lawsuits. Another proposed amendment filed as a shell bill deals with fees for frivolous lawsuits.

"It's something that's made it out before, which means there's interest," said Johnson, the sponsor of the House amendment to allow limits on lawsuit damages.

Rep. Jimmy Gazaway, R-Paragould, meanwhile, filed two proposed amendments that he said were intended to compete with tort reform proposals filed by his fellow Republicans. Gazaway's amendments would require a two-thirds vote on any future amendment to set damage caps, while the other would allow lawmakers to reject rules written by the courts, though not to replace them with their own.

"I think the tide has turned a little bit on the whole tort reform movement," Gazaway said. "I think the public is waking up to the fact that they're not giving up their rights."

Another proposal that "got people excited," McCollum said, was an amendment by freshman Rep. David Ray, R-North Little Rock, to raise the threshold for passing ballot measures to 60% of ballots cast by voters, up from the simple majority now required.

Last year, a proposal to overhaul Arkansas' process for amending the constitution by making it harder for the Legislature and petitioning groups to get measures on the ballot was one of the three amendments referred by lawmakers. Voters rejected the proposal -- dubbed Issue 3 -- by more than 10 percentage points.

While Ray supported Issue 3, he said the amendment combined too many changes, making it easy for the issue to get "confused and distorted." He said simply raising the threshold to approve any measure at the ballot box would be easier for voters to digest.

"I think it makes sense to increase the threshold for both," Ray said. "Both processes are susceptible to big-money, out-of-state interests."

Still, she noted the difficulties ahead for Democrats attempting to influence the process.

"Numbers make it harder for us unless it's an issue that could get bipartisan support," McCullough said.

Democrats hold 22 of the 100 seats in the House and nine in the 35-member Senate.

Before either chamber votes on any constitutional amendments, both the House and Senate committees on State Agencies and Governmental Affairs will be tasked with vetting the proposals and selecting one to send out for possible referral.

Each chamber can vote to send out one amendment by a simple majority (along with concurrence by a majority in the other chamber). Once two amendments are referred, the Legislature may pass a third if identical measures are approved in both chambers by two-thirds majorities.

The chairman of the Senate State Agencies committee, Sen. Jason Rapert, R-Conway, said Friday his committee would set dates to hear senators' pitches on amendments before holding a vote to determine which to move ahead with.

Similarly, the House State Agencies committee chairman, Rep. Dwight Tosh, R-Jonesboro, said he would either designate the committee as a committee of the whole or a special subcommittee to hear pitches. In the past, he said, members submitted lists ranking their top choices to hear for final consideration, a system Tosh said he is planning to use again this year.