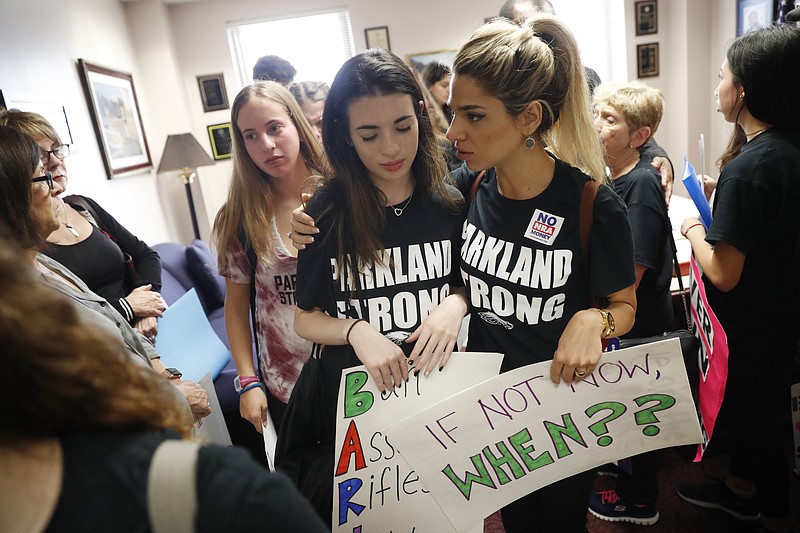 FILE- In this Feb. 21, 2018 file photo, Lital Donner, youth director for Congregation Kol Tikvah, comforts Aria Siccone, 14, a student survivor from Marjory Stoneman Douglas High School, as they challenge lawmakers in the state capitol on gun control reform, in Tallahassee, Fla. Marjorie Stoneman Douglas' Class of 2021 has endured a high school experience that will likely never be rivaled _ baptized by gunfire in their first year, bonded by hiding under desks for hours and punctuated now by another life altering event _ a global pandemic. (AP Photo/Gerald Herbert, File)

FORT LAUDERDALE, Fla. -- As students of the Marjory Stoneman Douglas Class of 2021 have struggled to define high school apart from the tragedy of the 2018 Valentine's Day shooting, their senior year has been punctuated by the coronavirus pandemic, upending their lives once again.

The majority are isolated at home on computers, their hard-fought routines altered and their support systems splintered.

The shooting, in which 17 students and staff members were killed, catapulted some students into the spotlight as they rallied for gun control and landed on the cover of Time magazine. But that was just a sliver of the experience, as many struggle at times to manage daily life.

Their only full year at Stoneman Douglas was as sophomores. Many students felt retraumatized every time they walked past the now cordoned-off freshman building, the site of the shooting.

"I struggled every morning to wake up and go to the school where I lost so many friends," said Price, 17. "I struggled to find a purpose of just doing simple tasks in life without my best friend by my side."

The two were inseparable like sisters, playing on the same soccer team and even sharing a birthday. They'd dream about what high school would bring while listening to the Miley Cyrus song "The Climb."

Price's family moved to North Carolina for her junior year, hoping for a fresh start. She was terrified of a new school and forging new friendships. But there was also a sense that her life was no longer just her own, that she'd be creating new memories and chasing her dreams for Alyssa -- for both of them.

Then the pandemic hit, forcing Price into virtual school and making it difficult to connect with the friends she'd finally made.

"I started to lose myself again," Price said.

As with millions of students across the country, proms and pep rallies were forgotten in the wake of the pandemic, depriving the Parkland, Fla., seniors yet again of traditional rites of passage and a normal high school experience.

Even graduation remains in limbo.

"At the very most, we're going to have a digital graduation," senior Ryan Servaites said. "And that's going to be the ceremonious end to four years of trauma."

Servaites, who hid under a chair in the auditorium for two hours while texting "I love you" to his parents, has found healing in activism. He joined the student-led March For Our Lives, registered first-time voters in various states and now works on gun-reform policy.

Samara Barrack struggled to connect with friends after the shooting, saying some classmates changed as they coped with the tragedy in different ways.

Barrack was on the cheerleading squad, but the pandemic canceled most events, making it hard to bond over practice and games. Her closest friends go to other schools, but she still longs for her senior-year traditions.

"Even if I'm not best friends with those people, it's an experience," said Barrack, who instead focused on a part-time job and a new start at the University of Central Florida, where she's enrolled for this summer.

Many of the students view college as a sorely needed do-over.

Most Stoneman Douglas graduates go to college, and before the shooting, Aria Siccone never questioned that she would, too.

"People say college experience is the best time in their life, and I wish I could do that. But at the same time, I know I wouldn't be able to handle it," said the 17-year-old Siccone, who avoids malls, movie theaters and other public places. Sometimes she's jealous of friends at other schools. The former honors student said she fears she can't be successful without college.

On the brink of their next step, many of the students are finding the balance between mourning a tragedy and moving forward, for themselves and those who died.

Price isn't sure what her future will bring. Wherever she goes, her purpose will be Alyssa. Perhaps that's why she feels drawn back to Florida.

"I find it impossible to figure out what I want to do with my life since school was never my main focus these past four years," she said. "I most definitely want to go to school in Florida and see where life takes me." 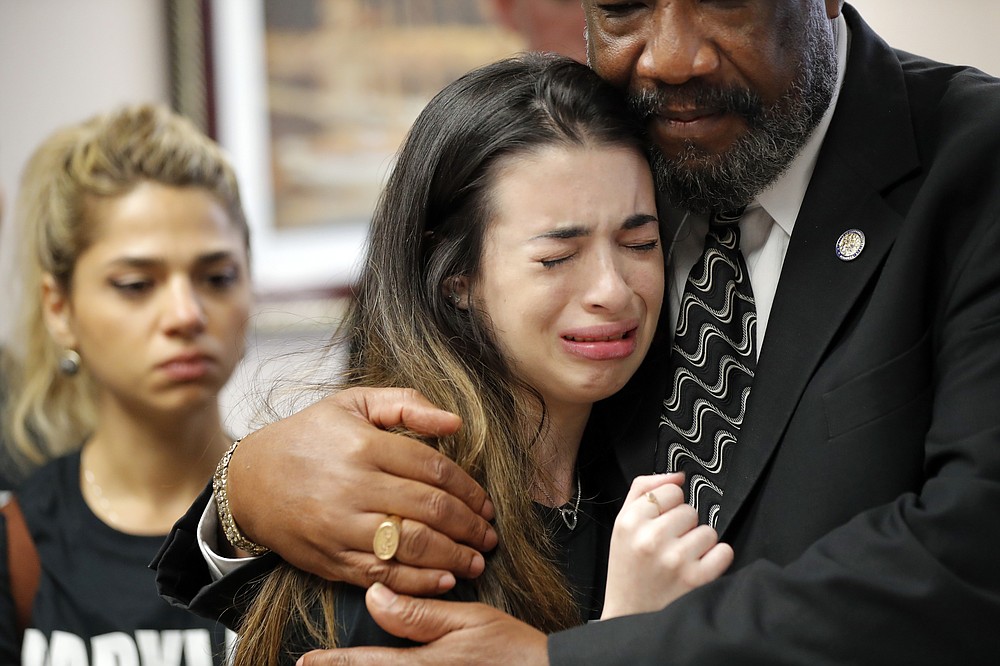 FILE- In this Feb. 21, 2018 file photo, Aria Siccone, 14, a student survivor from Marjory Stoneman Douglas High School massacre, cries as she recounts her story from that day, while state Rep. Barrinton Russell, D-Dist. 95, comforts her, as they talk to legislators at the state Capitol regarding gun control legislation, in Tallahassee, Fla. Even before the COVID pandemic upended the lives of millions of high school students, forever altering treasured milestones, homecomings, proms and graduation ceremonies, the Douglas high seniors were inextricably linked by tragedy. (AP Photo/Gerald Herbert, File) 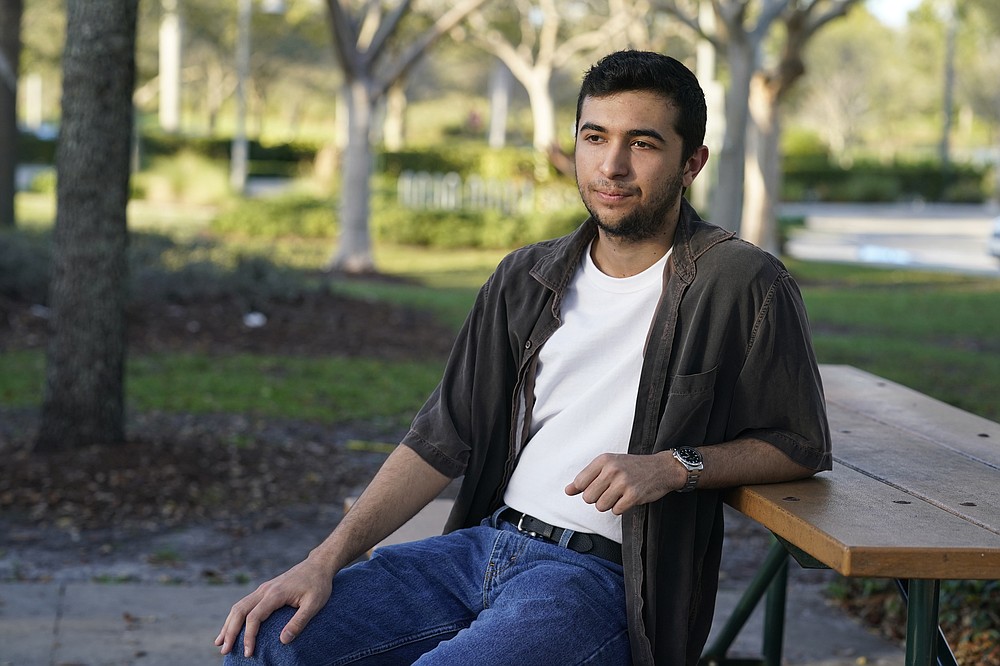 Ryan Servaites sits at a park, Thursday, Feb. 11, 2021 in Parkland, Fla. Servaites was freshman at Marjory Stoneman Douglas when the shooting occurred. He found healing in activism. He joined the student-led March For Our Lives, registering first-time voters in various states and now working on gun reform policy. He's planning to attend college and is passionate about enacting change, sounding assured and self-confident, but it's been a process. (AP Photo/Marta Lavandier) 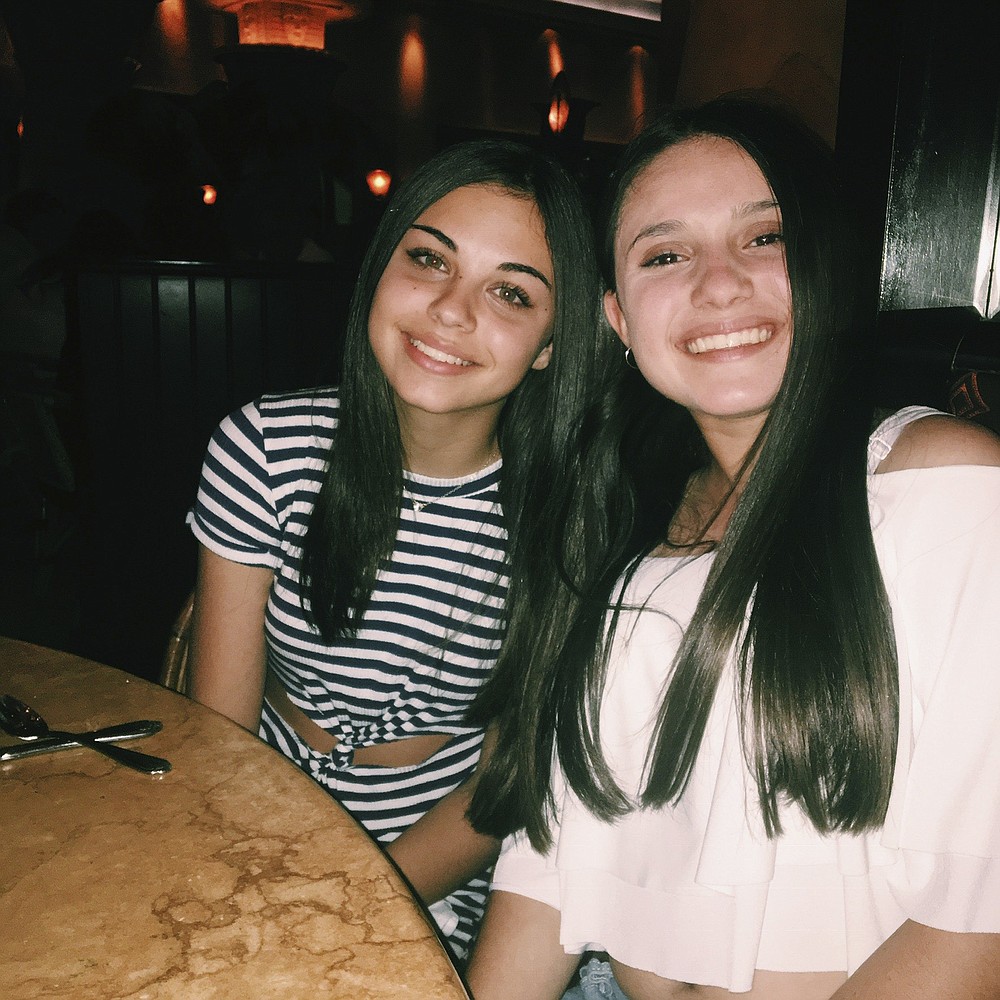 In this undated photo made available by Lori Alhadeff, her daughter Alyssa, right, sits at a table with her best friend Abby Price. Alyssa was killed in the 2018 Valentine's Day massacre at Marjory Stoneman Douglas High School in Parkland, Fla. Abby's family moved to North Carolina for her junior year hoping for a fresh start. She was terrified of a new school, forging new friendships and then COVID hit, marring the rest of her high school experience. (Lori Alhadeff via AP)
ADVERTISEMENT