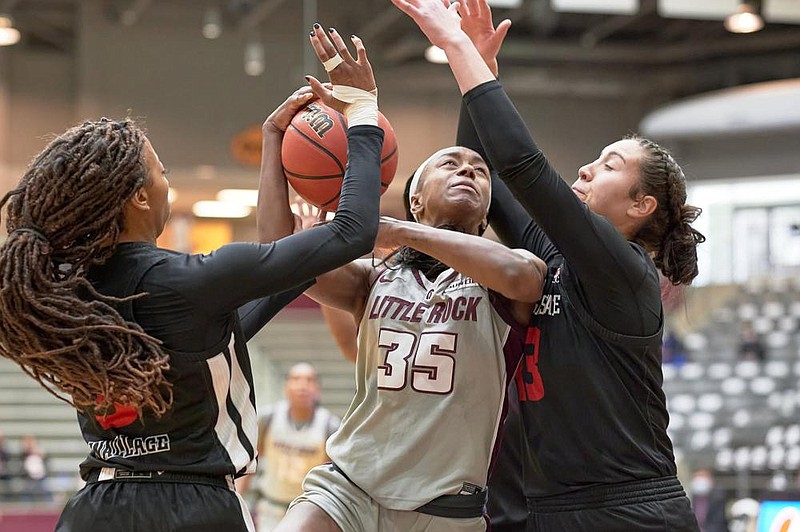 Senior Teal Battle hit 3 three-pointers in the final 3:47 of regulation, and another two in the extra period to launch the University of Arkansas at Little Rock to a 60-56 overtime victory over Arkansas State University on Saturday.

Battle matched a career-high 25 points, and her five three-pointers set a career-best, extinguishing the Red Wolves -- who led for over 34 minutes -- with the late barrage. Her final make from deep was a looping shot from the left wing with 1:20 remaining in overtime, which put the Trojans ahead for good and handed ASU its eighth consecutive loss.

"I wasn't expecting it to go in," Battle said. "I just knew I had to keep my composure. I can't get too hype. I can't get too excited. I just had to get to the next play because the game isn't over until the horn goes off."

UALR (12-7, 8-4 Sun Belt Conference) paired Battle's timely scoring with a career-high, 16-point effort from Tia Harvey to complete the weekend sweep. ASU (9-9, 4-8) scored 36 points in the paint, but suffered a field-goal drought of 6:18 in the third quarter and squandered a 10-point second-half lead. The Red Wolves remain winless at Jack Stephens Center all-time with the loss, and now sit a .500 after opening 9-1, their best start to a season since 1999-2000.

"It stung more today in the locker room after the game," ASU Coach Matt Daniel said. "And it stung more because we invested more. There's something to be said for that to come back and fight. But we have to close out games."

Scoring from Battle and Harvey masked a 33.9% shooting effort for the Trojans, as Harvey set the career mark on 7-of-14 shooting. Krystan Vornes finished with 12 points and nine rebounds, and iced the game with four consecutive free throws to close out the victory.

UALR was without Alayzha Knapp, who the program confirmed has opted out of the remainder of the season.

Daniel inserted Trinitee Jackson into the ASU lineup and returned from Friday's loss with size, using it to build a 29-21 first-half lead. Jackson scored nine of her team-high 13 points in the first half, when ASU scored 22 points in the paint and matched UALR's 18 rebounds.

Red Wolves forward Peyton Martin finished with 12 points and three rebounds before fouling out in overtime.

ASU's Jada Stinson tied the game at 48-48 to send it into overtime, but the Red Wolves couldn't offset Battle's three-pointers.

"I saw a kid that wanted to win the basketball game," UALR Coach Joe Foley said. "That was the key. I told her, 'Teal, you've got to shoot it.' She accepted it and did a great job."