Communication in the cards for Arkansas women 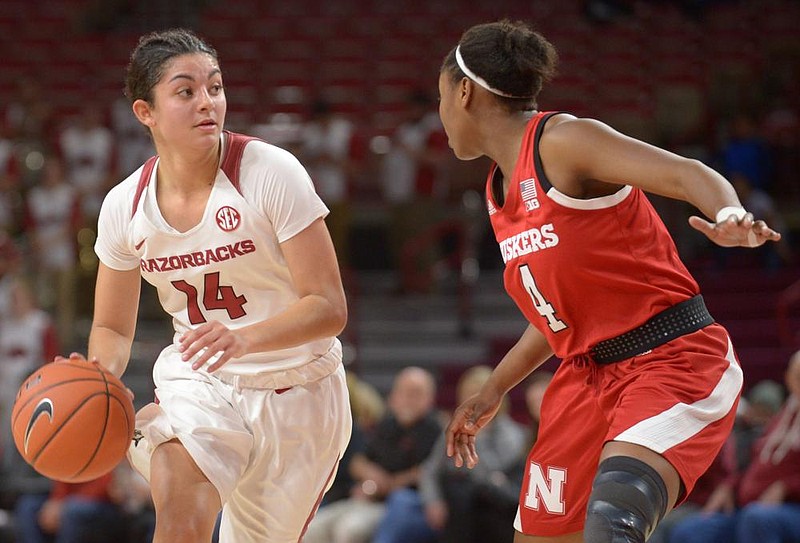 Jailyn Mason is one of ve Razorbacks seniors who make up a leadership group that gets together to play cards and have both serious and lighthearted discussions. Mason said the card games are a good way to hear the various viewpoints of the group on both on-court and off-court issues. (NWA Democrat-Gazette/Andy Shupe)

FAYETTEVILLE -- Mike Neighbors didn't think having one or two captains on this year's senior-laden Arkansas women's basketball team made much sense.

Instead, he selected a quintet of seniors to work as a group to identify issues and monitor the pulse of the group in a year fraught with unforeseen challenges.

The gregarious Neighbors has even found a special way for the individuals to communicate and enjoy time together in a socially distanced world.

More specifically, they play a game called "22" that he learned earlier this year from Kelsey Plum, the high-scoring guard who played for him at Washington and is now a graduate assistant on his University of Arkansas staff. The group, dubbed a "leadership council," consists of Chelsea Dungee, Destiny Slocum, Taylah Thomas, Jailyn Mason and Amber Ramirez.

The No. 18 Razorbacks (18-7, 5-6 SEC) have experienced some tremendous highs with wins over former national champions Baylor and Connecticut already this season, but they also lost five of their first seven SEC games and dropped three in the waning seconds.

Mason believes the card game works well as a mix of fun and serious discussion.

"Coach Neighbors is very casual, lighthearted, fun type of guy," Mason said. "So he's always going try to incorporate that into a serious conversation, which I can appreciate because it makes the serious, hard conversations a little bit easier."

Neighbors said that's one aim of the gatherings.

"It's kind of a different way of doing it instead of having a meeting in my office that feels like you got called to the principal's office," Neighbors said.

The premise is to take advantage of the different strengths of individuals, falling back on one of many old sayings he recalls from his paternal grandfather he refers to as Papa Neighbors.

"Don't expect a turtle to climb a tree; hire a squirrel for that job," Neighbors said. "It was about letting people stay in the areas of expertise.

"Chelsea's not a rah-rah kid, so don't expect her to be."

Mason said everyone in the group has a different viewpoint. She's a fifth-year senior who is the only player on the roster who was in Fayetteville when Neighbors arrived. Thomas came a year later. Dungee transferred the next year, and Ramirez, also a transfer, came the following year. Slocum, who has earned all-conference honors at two other schools, brings fresh perspective combined with experience as a graduate transfer.

"It's nice to have a bigger collective group because you aren't just focusing on basketball anymore," Mason said. "It's nice to be engaged on how people are feeling school-wise, safety-wise, covid-wise. Things that aren't just something you're dealing with on the court."

Neighbors said it's been fun seeing their personalities come out in the informal setting.

"Destiny Slocum is kinda low-key sly. Mason is a lotta fun because she thinks she's got things figured out," Neighbors said. "Ramirez is like this one the court. She's trying to get a read on everybody."

Topics of discussion in the card game have ranged from defining roles to covid-19 to team travel, which has become message board fodder when road losses piled up.

Thomas, who has now started 54 consecutive games, was tabbed as "the glue." It's a role that comes natural, she said.

"Any team is going to have differences and people who clash," Thomas said. "I just try to stay out of the middle. But I'm still able to talk about stuff. Any conflict that comes, I try to hear both sides and find a resolution."

Mason's role on the floor has changed this season. She's coming off the bench now after starting 96 of 97 games in her first three seasons. Neighbors calls her new role "Golden Retriever."

"She knows what everybody needs to get along," Neighbors said. "Some need a pat on the back. Some need a kick in the butt. She's got that about her and not everybody has that ability.

"It's not natural. It's something you develop through things she's been exposed to."

The Razorbacks travel the day of away games and don't stay in hotels to minimize contact because of covid-19. Neighbors has drawn criticism for the decision since Arkansas has won only one of six SEC road games.

Mason acknowledged it's something that's been discussed in their meetings, and the conclusion was reached it isn't really an issue.

"We realized that it's not the biggest factor that's been affecting us," Mason said. "It's different. It's a change. But it's something we're going to have to get through. But it's not gonna be the last thing we're gonna have to adapt to this year."

Neighbors reminded his players about the importance of playing as many games as they could this season to prepare for the NCAA Tournament. Traveling the day of the game helps that to happen.

"Is it hard? Hell yes it's hard," Neighbors said. "It's hard, but it's not a problem. I think some prefer it and for some it's a challenge. It's hard because it's not something we've ever done in the last four years.

The group also dispelled some misinformation that caused some consternation, Neighbors said.

"Chelsea read something on social media that said we needed to win eight out of our last nine to make the NCAA Tournament," Neighbors said. "I was like, 'Well, let's squash that one really quick because that's nowhere close to true.'

"But they had talked about that as a team and they were tight. They were like, 'Coach, that's hard.' Well yeah, but it's not accurate. It was good we talked about it though because it was affecting them."

Last week, the group talked about Neighbors' Washington team that advanced to the Final Four in 2016 and its similarities to this year's Arkansas team.

"I printed out our schedule that year and we dissected it," Neighbors said. "We had 10 losses going into the NCAA Tournament. We had a really challenging schedule, we had a couple losses down the stretch. They saw the correlations there.

"We talked about what that team did to get focused down the stretch."

Arkansas enjoyed an open date last weekend with four regular-season games remaining. The Razorbacks sandwich home games against Ole Miss on Thursday and Alabama on Feb. 28 around road trips to LSU on Feb. 21 and Auburn on Feb. 25 before the SEC Tournament.

Neighbors believes the Razorbacks have been sufficiently tested. Arkansas is the only team in the country with seven games against teams ranked in the top 10 this season.

But the answer to the ultimate test is yet to come.

"Did it test us or did it break us?" Neighbors said. "That's what these next three weeks are about."