Outside of Alabama, SEC is chaotic 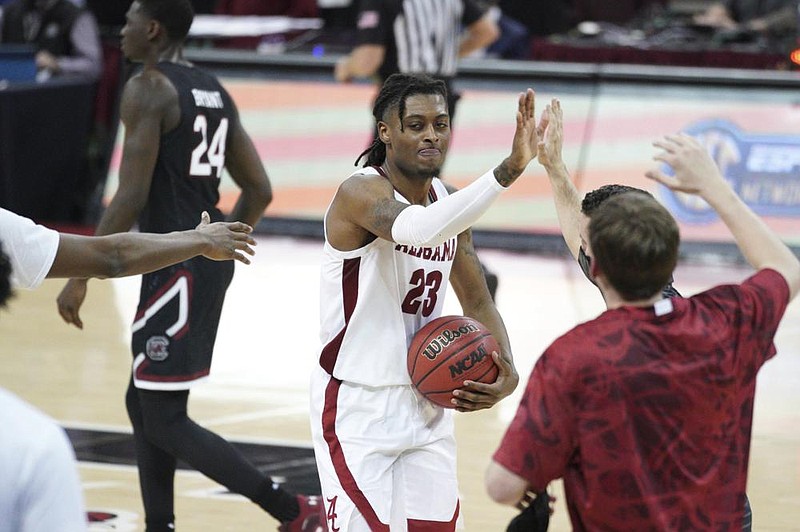 It's Alabama and everybody else.

It's not just football, either. The Crimson Tide have expanded their dominance to the SEC's roundball side.

If you thought Mac Jones, Najee Harris and DeVonta Smith were offensive juggernauts for Nick Saban, say hello to Nate Oats' Alabama, who put up a record 115 points on poor, defenseless Georgia on Saturday, running the Tide's conference record to 12-1.

The rest of the league is a mess. Teams are up one week, down the next, then up again and down again. Toss in the covid-19 pauses -- will Texas A&M ever play again? -- the turnovers, three-point threats, injuries, absences, flameouts and rising stars, and it's hard to know what to make of SEC basketball heading into the second half of February.

All of which could play right into Kentucky's hands. Seriously. Just 6-13 overall and 5-7 in the SEC, even after Saturday's win over Auburn, Kentucky's lone path to this year's NCAA Tournament involves hitting the lottery at the SEC Tournament.

Oh, there will be an SEC Tournament. Pay no attention to the skeptics and naysayers who claim conferences would be better off canceling their postseason events in favor of keeping everyone virus-free for the Big Dance.

The SEC was among the last leagues to pull the plug on its tournament last March. It won't do that again. Another prediction: There will be fans in Bridgestone Arena in Nashville, Tenn., from March 10-14. Maybe not a lot, but there will be fans.

What basketball can we expect in Nashville in three weeks? At this point, only the hoops gods know, given the scramble we've seen. Alabama keeps rocking and rolling. Others, not so much.

Take Rocky Top. Tennessee was the preseason pick to win the league, given Rick Barnes' mix of veteran experience and fresh talent. After a 4-1 start, however, the Vols are now 7-5 since after Saturday's 78-65 loss at LSU. Normally excellent on defense, Tennessee has been too inconsistent on offense to trust.

Then there's Missouri, the only SEC team to have beaten Alabama this season, topping the Tide 68-65 on Feb. 6. Cuonzo Martin's team has followed that conquest with consecutive losses, an 80-59 thumping at Ole Miss on Wednesday, followed by an 86-81 overtime loss at home to the University of Arkansas on Saturday.

And what about Arkansas? Eric Musselman's Razorbacks looked left for dead this time a month ago, blitzed in back-to-back road games at LSU (92-76) and Alabama (90-59). Since then, the Hogs have won six consecutive league games to tie LSU for second place at 8-4.

Meanwhile, Texas A&M hasn't played since Jan. 30 and Florida since Feb. 3. Mississippi State lost by 21 at home to Vanderbilt. South Carolina has lost three of its last four. And Auburn opted out of the postseason -- for NCAA investigative reasons -- before the season even began.

Oh, almost forgot. Down at Ole Miss, the under-the-radar Rebels have won four consecutive games. Kermit Davis' club wasn't expected to be much of a factor this season. But then maybe we've learned we shouldn't write off any team in this crazy season.

You can't help but peek down the road to Music City and what that SEC Tournament might look like. Right now, outside of Alabama, it appears anybody and everybody could have a shot.