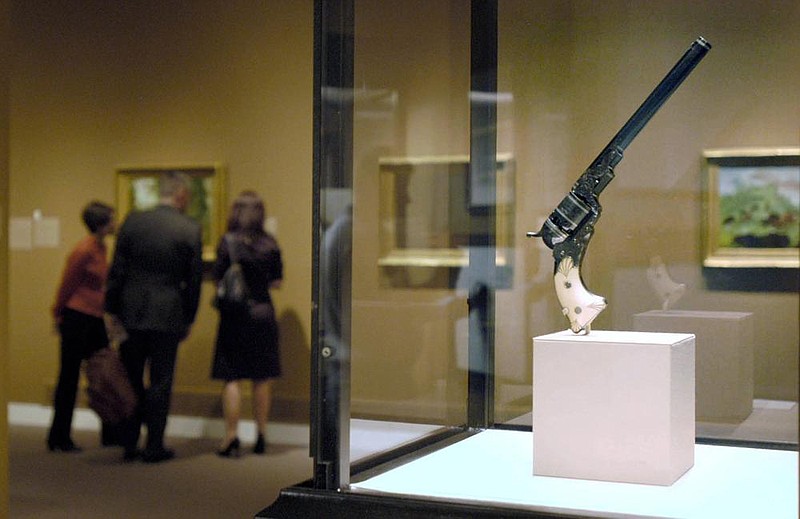 Samuel Colt’s No. 5 holster pistol is displayed in 2006 at the Wadsworth Atheneum in Hartford, Conn. Czech firearms company Ceska Zbrojovka plans to acquire American gun-maker Colt in a deal worth $220 million. (AP)

A Czech firearms company's acquisition of American gun manufacturer Colt will delay construction of its proposed North American headquarters and factory at the Port of Little Rock by an additional three to five years, a company spokesman said Monday.

Gov. Asa Hutchinson and top state and local economic development officials announced in April 2019 that the $90 million investment by Ceska Zbrojovka Group's U.S. subsidiary, CZ-USA, its headquarters and its first U.S.-based production facility would lead the company to employ nearly 600 people at the port within six years.

Construction now may not begin until almost seven years after the announcement, or well into the final year of the four-year term of Hutchinson's immediate successor as governor.

Word of the delay came after Ceska Zbrojovka said it signed a deal to acquire Colt, the American gun-maker that helped develop revolvers in the 19th century and has since supplied the armed forces in the U.S. and other countries.

The company said Friday it purchased all the shares in Colt Holding Company LLC, the parent company of Colt Manufacturing Co. LLC and its Canadian subsidiary, Colt Canada Corp.

The deal is worth $220 million and 1,098,620 newly issued shares in Ceska Zbrojovka and is subject to approval by regulators. The Czech company said it expected the transaction to be completed in the second quarter of 2021.

"With this strategic move, CZG will acquire significant production capacity in the United States and Canada and substantially expand its global customer base," the Czech company said.

The company employs about 1,650 workers in the Czech Republic, United States and Germany.

Once the Colt transaction is completed, Ceska Zbrojovka will need time to integrate the new company into its operations, hence the need to delay the port project, spokeswoman Eva Svobodova said in an email.

"For this reason, we anticipate postponing the construction of the Little Rock plant by three to five years," she said. "We have already notified Arkansas officials about the ongoing acquisition of Colt and the delay in the construction in Little Rock."

Hutchinson, who first began luring the Czech firearms manufacturer in 2014, confirmed in a prepared statement that he was notified of the Colt acquisition but said CZ-USA didn't provide specifics on how the deal would impact the port project. Still, while concerned about a potentially prolonged lag, the governor said he worked on bringing production of Colt weaponry to the state.

"This is great news for CZ to take ownership of the iconic American brand of Colt firearms, but it is concerning that this may lead to a lengthy delay on the Arkansas investment," he said. "Of course, we will make the case that we can make the Colt brand in the state. Both AEDC and myself will continue our conversations with CZ on this project."

The delay is only the latest one in the project.

Preliminary work already had been done for what is planned to be CZ-USA's 265,000-square-foot facility on a 73-acre site off Zeuber and Fletcher roads east of Interstate 30 on land owned by the Port of Little Rock.

Initially, some hiring for the production plant was supposed to be begin in the fall of 2019 with still more hiring in the spring of 2020, according to a CZ-USA page on the Little Rock Regional Chamber of Commerce's website.

By the time the spring rolled around, CZ-USA reaffirmed its commitment to the project but not at the pace it initially envisioned. Among the factors in the delay was "creating an appropriate funding framework," according to a spokesman.

By last July, construction was supposed to begin the next month.

Last week, the delays were attributed to the coronavirus pandemic.

Svobodova said the company fully intends to hold up its end of the bargain with the state.

"We are ready to honor any contractual obligations towards the State of Arkansas," she said.