ARKANSAS SIGHTSEEING: Check out Hot Springs beyond the obvious 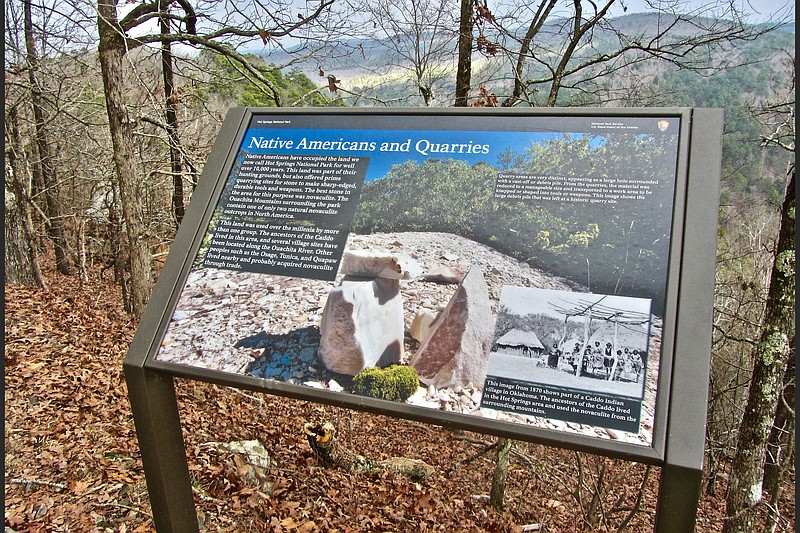 The former presence of American Indians is noted along North Mountain Loop. (Special to the Democrat-Gazette/Marcia Schnedler)

HOT SPRINGS — The Hot Springs terrain most familiar to visitors is mostly flat, though not quite as flat as the proverbial pancake. Central Avenue, Spa City's main artery, is level enough to make for easy strolling to the bathhouses, gift shops, eateries, racetrack/casino and other diversions.

But an upward glance reveals that mountains lurk nearby, one of them rising steeply behind Bathhouse Row. A turn off Central Avenue onto Fountain Street steers motorists up sinuous Hot Springs Mountain Scenic Drive. The summit it reaches is not a towering peak by Rocky Mountain standards, or even among the Ouachitas. However, the 3.6-mile loop road does climb 538 feet to the summit 1,040 feet above sea level.

For robust visitors, the route and its North Mountain Loop extension make for a bracing hike on a clement day. For the rest of us, it's a picturesque drive and a mostly idyllic change of pace from the commercial bustle of Central Avenue. Further hilly exploration is possible on West Mountain Scenic Drive, off Prospect Avenue or Whittington Avenue. Parking is available at a number of scenic overlooks.

The Automobile Age lay in the future when Hot Springs Mountain Scenic Drive was laid out in 1886 as a carriage road. In the 1880s, major league baseball teams began bringing their players to Hot Springs for preseason training, in which the steep landscape played a role. A plaque near Happy Hollow Spring on Fountain Street explains the connection:

"Other than the hot baths, hiking the mountain trails was the biggest reason for baseball players to train in Hot Springs. Much of the stamina of pitching legends Cy Young, Walter Johnson, Babe Ruth [in his young Red Sox years] and Lefty Grove was forged by hiking the long trails that began and ended in this area called Happy Hollow."

Today's motorists on the longtime scenic drive can pull off for a sweeping panorama at red-roofed Hot Springs Mountain Pagoda, built in 1911. The pagoda's views take in downtown Hot Springs, with more of the Ouachita Mountains in the distance.

"Although there is no silver found on the mountain, Indian Mountain is rich in Novaculite, which was highly valued by the Native Americans for making tools. Since this stone breaks with a predictable stone-shaped fracture, they could easily carve tools into whatever shape and thickness they desired."

The one paid attraction on the mountain drive ranks as a man-made intrusion on the natural setting. But it also qualifies as a survivor — a Hot Springs landmark that has lasted in several forms for a century and a half.

Local mill owner Enoch Woolman built the first Hot Springs Mountain Tower in 1877, at a time when hot-air balloons were about the only way to enjoy a view from aloft. His wooden structure was replaced in 1911 by the steel Rix Tower, which catered to tourists until it was demolished in 1971.

Eleven years later saw construction of the present Hot Springs Mountain Tower, which takes visitors up 216 feet by elevator to an open-air observation deck. Vistas extend over some 140 square miles of scenery including more of the Ouachita Mountains. Adult admission is $10, with discounts for various categories. The attraction is endearingly old-fashioned — a throwback to an era before the Wright brothers.

The less-traveled West Mountain Scenic Drive has three overlooks. The first affords a splendid view of the eight buildings on Bathhouse Row and the hulking former Army-Navy Hospital. The second, West Mountain Picnic Overlook, features a mountain shelter constructed in 1924 to give visitors a place to relax. Also at the site are picnic tables. The West Mountain Loop overlook at the summit provides vistas south to the Trap Mountains and distant Lake Hamilton.

Westward views from West Mountain extend to Sugarloaf Mountain and Music Mountain. The surrounding peaks continue to play a role in heating to an average temperature of 143 degrees the water that gives Hot Springs its name and its fame.