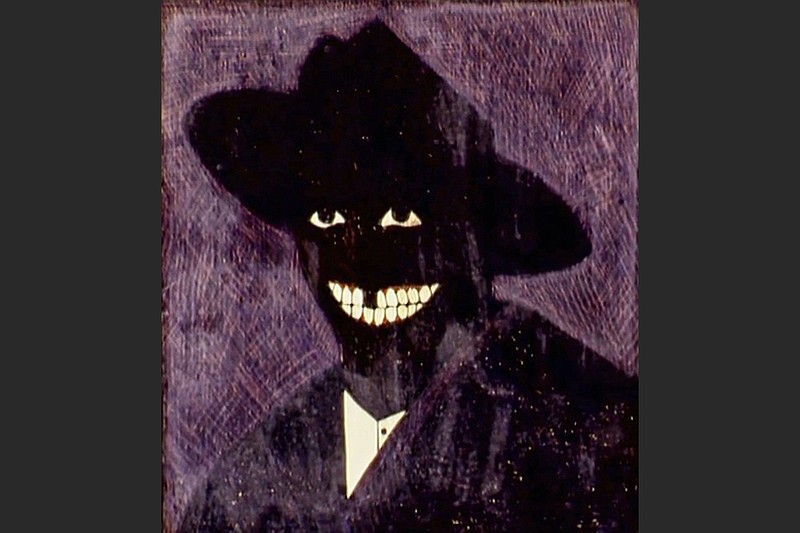 Kerry James Marshall, “A Portrait of the Artist as a Shadow of His Former Self,” 1980, egg tempera on paper, is among the works discussed in “Black Art: In the Absence of Light,” a new HBO film. (HBO/TNS)

"Black Art: In the Absence of Light," the new documentary film from acclaimed director Sam Pollard that began streaming last Tuesday on HBO, opens with a clip from a notorious 1976 "Today" show interview.

Tom Brokaw is the host. David Driskell, an artist and art historian, is the guest, there to discuss his groundbreaking show, "Two Centuries of Black American Art: 1750-1950," the first major museum survey of its subject.

What, Brokaw wants to know, did Driskell think of the critical drubbing in The New York Times by Hilton Kramer, the paper's chief art critic?

Despite a significant abundance among the 200 assembled works of art by dozens of important artists, Kramer insisted that the show was "often more interesting as social history than for its aesthetic revelations." Noteworthy as anthropology, in other words, not as art history.

The ancient racist trope distinguishing between merely interesting artifacts and profound works of art — that is, between the objects produced by "primitive" versus "civilized" cultures — was inescapable. Driskell was not having it.

Rather than take the bait and mount an unnecessary defense, he gave a devastating answer. Pausing at the mention of the prominent art critic's name he replied, in essence: Who?

The occupant of the most important seat in American art journalism was knowingly made a cipher. For the vital purposes of a discussion of museums' long-ignored history of Black art, newly emergent in wake of the civil rights era and prompted by America's bicentennial celebrations, Kramer's ignorant view was irrelevant. A renowned white critic and his obtuse complaint about a Black curator's show vanished into thin air.

Driskell could be said to have mirrored what Ralph Ellison probed in his indispensable novel, "The Invisible Man": the controlling, suffocating power of social and cultural invisibility. Pollard's documentary turns immediately to splendid painter Kerry James Marshall, who saw Driskell's "Two Centuries" show during its debut run at the Los Angeles County Museum of Art when he was 21, and for whom Ellison was also a touchstone.

Provocative cultural connections are subtly unveiled. Marshall, now 65, has since made his mark as among the most important artists of his generation through a nuanced and moving representation of Black American civilization.

"Black Art: In the Absence of Light" could use more incisive moments like that. The film covers a lot of territory, including interviews with notable artists, curators, historians and collectors. The Studio Museum in Harlem gets special attention — although Driskell, who once chaired the art department at Nashville's Fisk University, is quick to set the record straight by giving credit to the contributions of historically Black colleges and universities. Driskell, who died from covid-19 last spring at 88, contributed what were probably his final interviews.

Yet the film seems unfocused. It is part a welcome record of an art exhibition and its broad impact over two generations of artists, part survey of what an arbitrary selection of Black artists have achieved since, part analysis of diverse problems within a culture too often mischaracterized as monolithic and part chronicle of a crucial institutional infrastructure that has grown exponentially in the new millennium. By itself, any one of those topics would fill a documentary to overflowing.

Better too much than too little, of course, especially during this particular Black History Month — a cultural moment poised on a knife-edge between fraught and hopeful. Pollard's brilliant documentary "MLK/FBI," which lays out in excruciating detail the racist campaign of destruction waged against the civil rights leader by J. Edgar Hoover, is also streaming. I'd suggest watching it first, followed by "Black Art: In the Absence of Light," which ponders the fruits of institutional demand for cultural equity animated 45 years ago and that is only now beginning to be fulfilled.