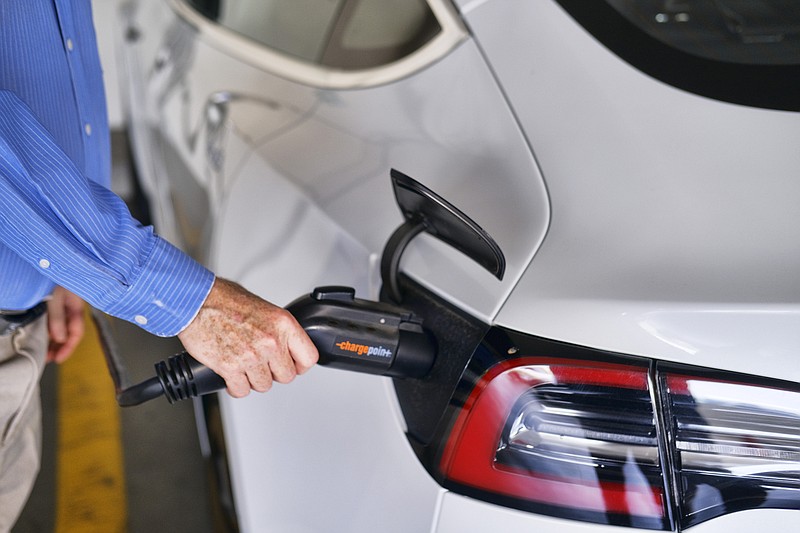 FILE - In this Oct. 16. 2019, file photo a driver plugs in the Charge Point electric plug into his Tesla car at a parking garage in downtown Los Angeles. Experts expect most new cars sold in 2030 to be electric. The Biden administration promised 550,000 charging stations to help with the transition to electric cars.(AP Photo/Richard Vogel, File)

The state Department of Energy and Environment launched a program this month to support the growth of charging outlets in Arkansas. The program is using nearly $1 million from Volkswagen's environmental mitigation fund to provide rebates to public and private applicants that install Level 2 EV stations, which can charge electric vehicles in eight hours or less using a 240-volt output, according to the department.

Program managers will be looking for people like Doug Breitling, owner of Arsenic and Old Lace Bed & Breakfast Inn in Eureka Springs.

Breitling installed three chargers about six years ago with the help of incentives that Tesla offered at the time, he said. He's had guests -- including one Tesla driver on an 8,000-mile road trip -- stay at the inn solely because he had charging stations.

"We've had a good number of people use it," he said. "Electric vehicles are getting to be much, much more popular."

The state is ranked 46th and 42nd in alternative fueling stations and electric charging outlets, respectively, per 10,000 vehicles. It ranks last in overall electric vehicle adoption and infrastructure, according to U.S. Department of Energy data analyzed by QuoteWizard, an insurance comparison site. 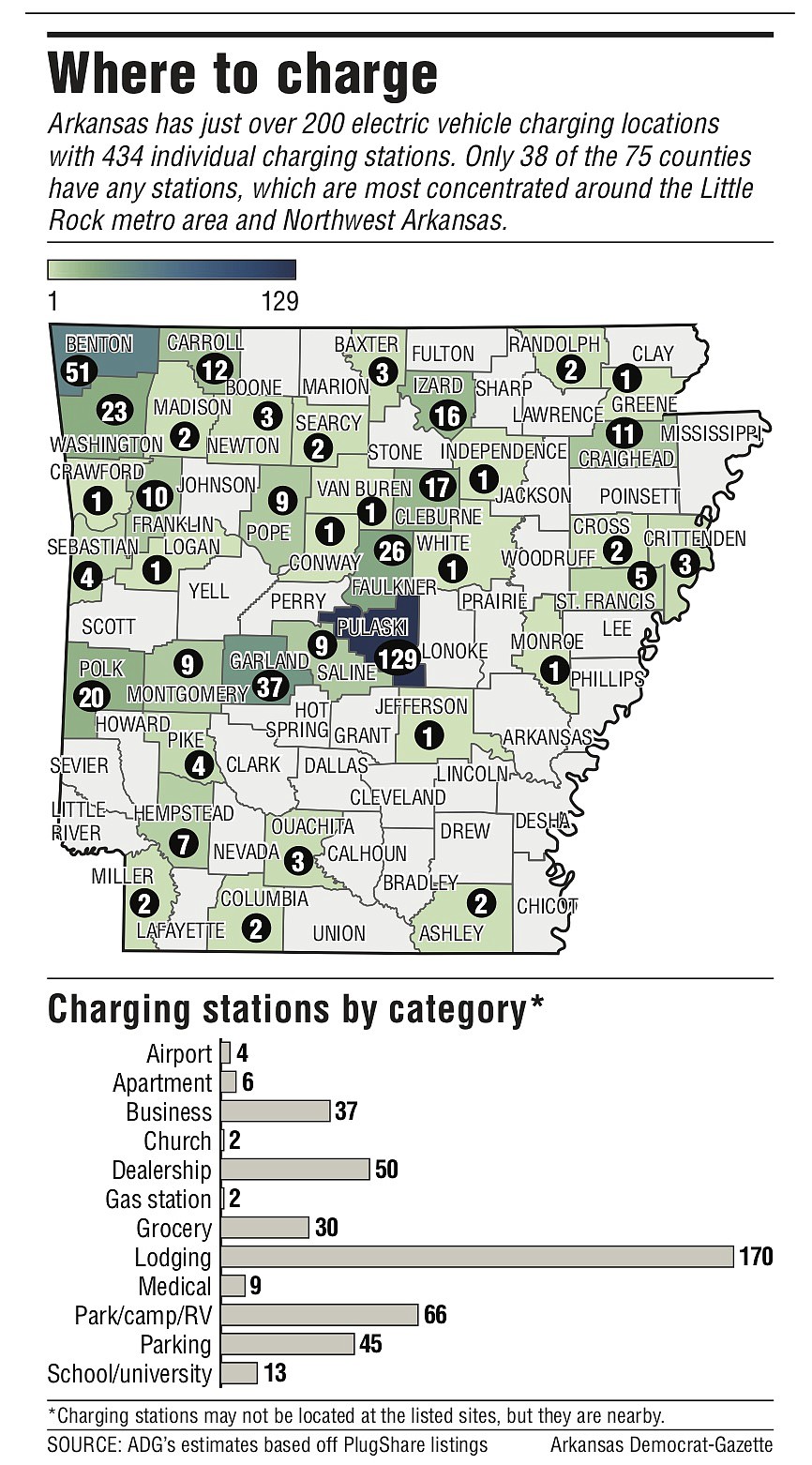 Manufacturers are also pledging more electric vehicles. General Motors said in a January news release it will eliminate gasoline and diesel light-duty cars and SUVs by 2035.

The industry has grown rapidly in the past decade, but clean vehicles represent just 2% of cars sold in the United States, 5% in China and 10% in Europe, according to industry data.

Arkansas has an estimated 202 EV charging locations with 434 individual stations. Nearly 30% of the stations (129) are in Pulaski County, and about 17% are in Benton (51) and Washington (23) counties, according to an Arkansas Democrat-Gazette analysis of entries on Plugshare, a popular electric car driver's app.

Thirty-seven of Arkansas' 75 counties have no charging locations.

The nonprofit Adopt a Charger has plans to install charging stations in 10 locations across the state with the help of a $160,000 grant from Entergy Corp.'s Environmental Initiatives Fund, according to a news release. It broke ground Feb. 1 at the first location, Flagpole Park, in Lonoke, after the City Council unanimously approved the fee-free charging stations.

"Electric vehicle adoption in Arkansas is far behind what has occurred in many states, although Entergy Arkansas is part of efforts to encourage the use of EVs because of the many benefits they provide for drivers -- lower cost to operate and maintain -- and helping to reduce environmental impacts," Entergy spokeswoman Brandi Hinkle said via email.

In Arkansas, 1,709 electric vehicles are registered; that's less than 0.01% of the 4.1 million registered vehicles in the state, according to the Department of Finance and Administration. About 0.5% (21,213) are hybrids, which run partly on gasoline, like a conventional car, as well as an electric motor and battery.

"We think getting the state closer to a saturation level with chargers will incentivize car buyers to opt for an electric car," said Becky Keogh, secretary of the Arkansas Department of Energy and Environment. "Really, the purpose of our program is to leverage what was about $2 million, and hopefully that will bolster a lot more investment."

Keogh said it seems like electric vehicles are the future, at least for passenger vehicles, and the agency wants to address the needs of consumers, tourists and residents.

"I think it's also important we maintain a diverse infrastructure in Arkansas that responds to the needs of our businesses," she said.

Owners typically charge their electric vehicles at home overnight, generating enough power to go about their daily routine. However, these charging station "deserts" can be a deterrent to both in- and interstate travel, said several electric vehicle owners.

Range anxiety was one of the top concerns when many Arkansans bought their electric vehicles, according to members of the Facebook Group AR EV Owners.

Electric car range can vary. For example, the Smart Fortwo Electric Drive Coupe has a minimum range of 58 miles, while the Tesla Model S 100D has a maximum of 335 miles.

"I think that people would be very surprised how far you don't go ... I don't have any range anxiety, but I'll admit I use to when I first purchased the vehicle," said Jay Ward, president and Facebook administrator of AR EV Owners, whose BMW has an 81-mile range."I do take Dallas trips or whatnot, and for people like me, either own a second vehicle or rent a vehicle. You still come out ahead on savings."

Guests brought to town by places like Breitling's bed-and-breakfast tend to shop, eat and spend money in the city. That's one of the reasons Hot Springs decided to add four chargers near its visitor center as part of the Adopt a Charger's "Charge Up! Arkansas" plan, which are installed at no cost to the city.

"It's been on the city's radar for a bit to offer visible charging stations," Deputy City Manager Lance Spicer said. "We'd like to get them in as quick as we can, before spring and summer months when visitors come."

Spicer said the city is most likely going to offer the electrical charge at no cost. The parking is metered.

The City of Fayetteville adopted standards for businesses installing electric vehicle charging stations as part of a plan to curb emissions harmful to the environment. The city plans to start setting up chargers at public parking spaces in city lots and parking decks within about 18 months, the Northwest Arkansas Democrat-Gazette reported in January.

Electric charging prices for customers vary by location and can be by hour plugged in or by kilowatt-hour. The long-range version of the Tesla Model 3 has a 75 kWh battery pack with a 322-mile range. The average national electric price was about 13 cents per kWh late last year. Assuming a charging efficiency of 85% -- the usual efficiency for standard (Level 2) charging stations, according to the National Center for Sustainable Transportation -- a full charge would cost a Tesla Model 3 owner $11.47. That's 3.6 cents a mile.

Walmart, which has chargers at five locations in the state, charges 43 cents per kWh for guests and 31 cents for Pass+ members at its DC fast Little Rock location. The more common Level 2 chargers are best for extended parking, while a DC fast charger can fully charge most cars in the time it takes to grab some lunch.

The price for using these stations may not make much money for small-business owners, but they can draw in customers.

At Breitling's inn, charging is free for guests and $15 for nonguests to plug in. Breitling said he wanted to be clear that the bed-and-breakfast is not a public fueling station. Most months, he breaks even on the electric bill.

"It's not a moneymaker other than it exposes us to guests we would not get otherwise," he said. "I'm one who believes you have to provide the infrastructure your guests want."

Tesla began building out its own infrastructure for its electric vehicles years ago. The first Supercharger station in Arkansas went up in the spring of 2017 at the Outlets of Little Rock near the Interstate 30/Interstate 430 interchange.

Most charging stations in the state are Level 2. Lodging, such as hotels and resorts, make up about a fourth of the 200 or so charging locations, according to Democrat-Gazette estimates based on PlugShare listings. The next most common locations are at or near dealerships (38), parks/campgrounds (33) and other businesses (27).

"Specifically I would like to see them in places in the state where we travel to see the wonderful nature of the state -- Petit Jean, Devils Den, Hawksbill Craig, NE Arkansas, SE Arkansas. Filling the holes so an about-200-mile EV can drive out into nature and make it home without range anxiety would be amazing," said John Gable of Springdale, who drives a Tesla Model 3.

While no charging stations are currently within state park boundaries, the Arkansas Department of Parks, Heritage and Tourism is in the planning stages, said Melissa Whitfield, a department spokeswomen.

Keogh said parks would be an ideal spot, as well as apartment complexes and workplaces; some have already expressed interest in the Energy Department's program.

Hinkle, the Entergy spokeswoman, said people who charge their vehicles at home should have no issues using their standard electrical wiring, although they may have to hire licensed electricians to install a Level 2 charger.

"Charging at night is a good choice, as there is typically less demand on the system and cars are usually parked at that time," she said. "The rates are the same around the clock."

For businesses and organizations that are building multiple charging ports -- as in Lonoke -- Entergy will work to ensure the needed infrastructure is in place, she said. Current stations at private businesses were required to meet certain requirements to be installed.

More information about all of the Arkansas programs funded by the Settlement, visit: https://www.adeq.state.ar.us/air/planning/vw.aspx.