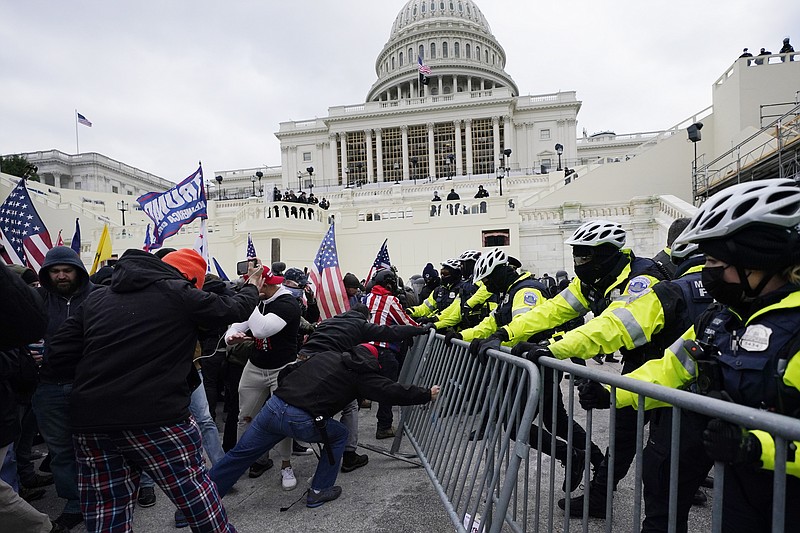 FILE - In this Jan. 6, 2021 file photo, rioters try to break through a police barrier at the Capitol in Washington. People charged in the attack on the U.S. Capitol left behind a trove of videos and messages that have helped federal authorities build cases. In nearly half of the more than 200 federal cases stemming from the attack, authorities have cited evidence that an insurrectionist appeared to have been inspired by conspiracy theories or extremist ideologies, according to an Associated Press review of court records. (AP Photo/Julio Cortez, File)

WASHINGTON -- The Senate announced its first hearings to examine the Jan. 6 siege of the Capitol, calling in the former chief of Capitol Police and the former heads of security for the House and Senate, all three of whom resigned immediately after the attack.

Two Senate committees will meet next week to begin a broad examination of the security failures that led to the vast breach, in which five people died. In addition to the Feb. 23 hearing, the two committees are pressing for information from almost two dozen agencies and departments about the response.

The Senate Homeland Security and Governmental Affairs Committee and the Senate Rules Committee announced Tuesday that they had invited former Capitol Police Chief Steven Sund, Michael Stenger, the former Senate sergeant-at-arms, and Paul Irving, the former House sergeant-at-arms, to the hearing, along with Robert Contee, the chief of the Metropolitan Police Department.

The security breakdown that day, as the House and Senate met for a joint session to count electoral votes, was severe. The Capitol Police had planned for a free-speech demonstration, not a violent insurrection by supporters of former President Donald Trump to overturn the election.

With a diminished security presence, the rioters not only breached the Capitol but entered the Senate chamber minutes after senators had fled and tried to break through the doors of the House chamber with lawmakers still inside. Outside, they engaged in hand-to-hand combat with an outnumbered, ill-prepared Capitol Police force, eventually assisted by D.C. police.

[Video not showing up above? Click here to watch » https://www.youtube.com/watch?v=auHFpjKIR2M]

The acting chief of the Capitol Police, Yogananda Pittman, has acknowledged the department knew before Jan. 6 that extremists could be in the crowd outside the Capitol, but she and other leaders are still pointing fingers about who was responsible for not bolstering security.

In the aftermath, tall fences and barbed wire now surround the Capitol, cutting off streets and laying out a wide perimeter. Thousands of National Guard troops line the fences and protect the halls.

The Senate announcement was made after House Speaker Nancy Pelosi said Monday that the House will move to establish an independent, Sept. 11-style commission to look into the insurrection. Legislation to set up the commission could be introduced as soon as this week, according to a person familiar with the process. The person was granted anonymity to discuss the planning.

Pelosi said the commission will "investigate and report on the facts and causes" relating to the attack and "the interference with the peaceful transfer of power."

At the White House, press secretary Jen Psaki said President Joe Biden supports the formation of a commission. Biden "backs efforts to shed additional light on the facts to ensure something like that never happens again," she said.

In a letter to Democratic colleagues, Pelosi said the House also will put forth supplemental spending to boost security at the Capitol.

Other investigations are also planned. Pelosi, D-Calif., asked retired Army Lt. Gen. Russel Honore to lead an immediate review of the Capitol's security process, and several other committees are looking into different aspects of the insurrection.

In her letter, Pelosi said, "It is clear from his findings and from the impeachment trial that we must get to the truth of how this happened."

Information for this article was contributed by Josh Boak and Michael Balsamo of The Associated Press.