Oaklawn shuffling after loss of 8 days 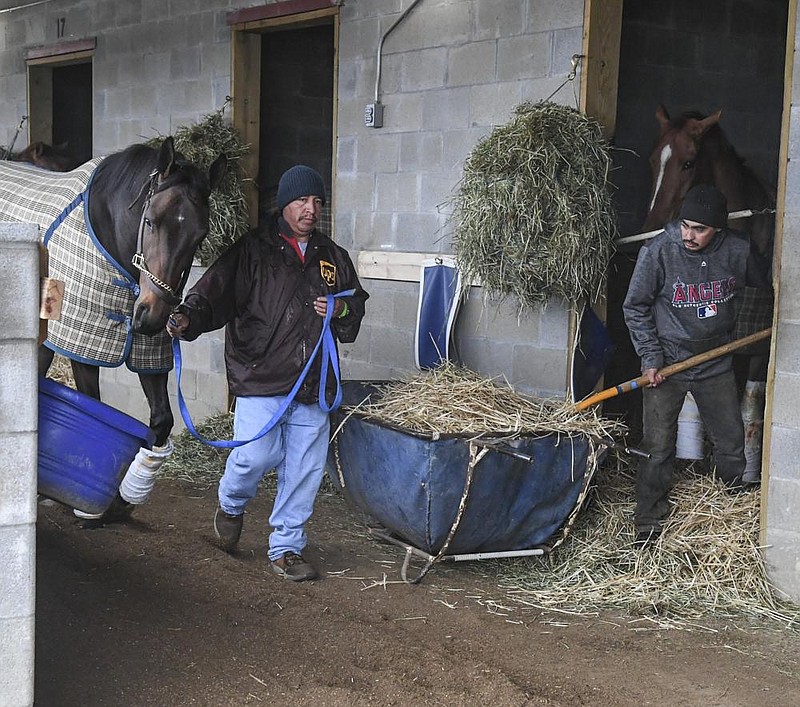 Adolfo Sanchez tends to a horse at Oaklawn Racing Casino Resort in Hot Springs last week. Frigid temperatures, snow and ice forced the postponement of races at Oaklawn for the second consecutive week. Racing is scheduled to resume Feb 25. (The Sentinel-Record/Grace Brown)

Record cold and accumulations of snow and ice have led to the postponement of a second consecutive week of racing at Oaklawn. Track officials announced Monday that racing has been suspended through Sunday.

The next race day at Oaklawn Racing Casino Resort is scheduled for Feb. 25.

"These are new circumstances, and we're just rolling with it and dealing with it as they come," Oaklawn President Louis Cella said.

Despite the coronavirus pandemic, Oaklawn did not miss a scheduled day of racing last season. Eight racing days have been postponed this season, all since Feb. 11.

If racing resumes Feb. 25, that weekend of racing is looking at having six stakes races take place.

The Razorback, Spring Fever Stakes and Southwest now are scheduled for Feb. 27, and the Downthedustyroad, Dixie Bell and Bayakoa are set for Feb. 28.

"Just eyeballing it, that's ... close to $2 million in stakes races alone in the last weekend of February, so that's pretty strong."

Cella said Oaklawn remains committed to a season's worth of races until the final day of the season, May 1, despite losing eight days so far.

Additional days include the Wednesdays of March 31 and April 28.

"After that, we're going to add a few races a week," Cella said. "If we're able to do all that, we'll run pretty darn close to the same number of races we ran last year. We have an obligation to do what we can for our horsemen to get their horses on the track, and more importantly to get on the Derby Trail, to get the Southwest run, and somehow the Rebel, and the Arkansas Derby. Even though on the calendar, it's a little goofy, we're going to do it, and we're just going to see who shows up."

Since Oaklawn has had four races on its schedule that contribute Kentucky Derby qualifying points -- in a system begun in 2013 -- it has scheduled those races between 25 days and four weeks apart. The Southwest, which will distribute 17 points, is now scheduled for Feb. 27, two weeks before the 85-point Rebel Stakes, scheduled for March 13.

Kentucky Derby hopefuls rarely race two weeks apart, and none of their connections are likely to make an exception to that norm for the sake of the opportunity to run an individual entrant in both the Southwest and Rebel, despite their respective purses of $750,000 and $1 million.

"Like last year, that was a goofy year with covid. This year, we still have covid, but we're dealing with Mother Nature, but we're resilient. We're Arkansas tough. We're going to run these races one way or the other, but we still have an obligation to make sure it's done in a safe environment."