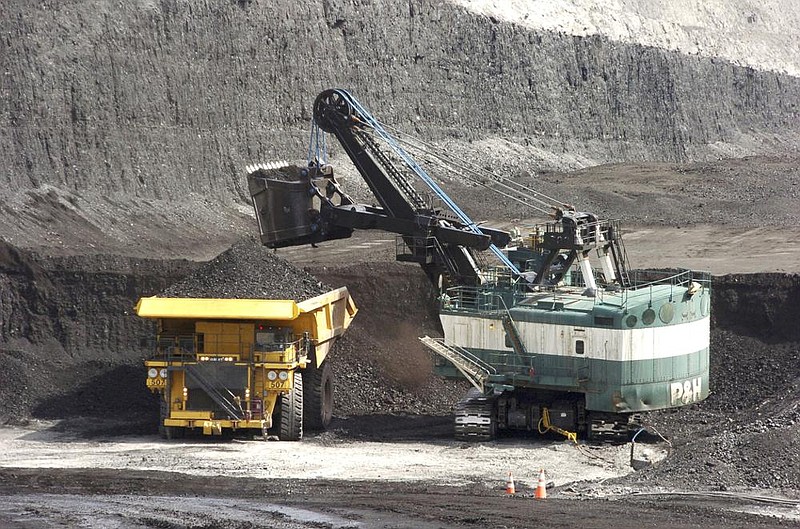 A mechanized shovel loads a truck with coal at the Spring Creek coal mine near Decker, Mont., in this April 2013 file photo. As the Biden administration tackles climate change, coal miners and oil workers fear for their jobs. (AP)

The Biden administration has gotten off to a rough start trying to reassure coal miners and oil workers whose jobs are threatened by the president's fight against climate change.

Such comments have backfired with oil workers twisting pipe in Texas and miners digging coal in Appalachia.

"Sure, we're going to make solar panels in these mountains," Joyce Evans scoffed from her home in Pineville, Ky.

Evans, who ran her own coal yard until 2000 and still works at the site near the convergence of Tennessee, Virginia and Kentucky, says she's skeptical of the promises from Washington and disturbed by the new administration's early climate moves.

The frustration underscores the stakes for hundreds of thousands of workers whose jobs are imperiled by President Joe Biden's fight against climate change and the economy's embrace of renewable energy. And it highlights the political challenge for Biden as he tries to enlist Americans in a battle for cleaner energy -- including voters in swing states rich in fossil fuels.

Many of them, including West Virginia and Pennsylvania, were once reliably Democratic, but Republicans -- led by former President Donald Trump four years ago -- have made inroads with blue-collar workers there with promises to support their jobs and their fossil-driven economies.

"It just shows the arrogance of politicians," said Mike Party, 65, the chief executive of Beryl Oil and Gas in Midland, Texas, whose 43-year career in the oil and gas industry started with a summer job. "When they sit there and say you should just go find another career, how do you not take that personally?"

Biden casts his moves to combat climate change as an economic opportunity, with the promise to spur jobs installing solar panels, building wind turbines and weatherizing homes. "We're never going to forget the men and women who dug the coal and built the nation," Biden vowed as he announced a slew of climate initiatives last month. "We're going to do right by them -- make sure they have opportunities to keep building the nation and their own communities" while "getting paid well for it."

A White House spokesman said that Biden's climate plan would make transformative investments in infrastructure and tackle the climate crisis while creating millions of good union jobs. The administration will take additional actions to fulfill these commitments in the weeks and months ahead, the spokesman said, asking not to be identified.

The president created a government working group dedicated to the issue and ordered it to come up with a plan for driving the economic revitalization of communities affected by the decline of fossil fuels. The initiative dovetails with a campaign by environmentalists and Appalachian leaders for a transition that combines policies, training programs and investments to ensure communities and workers aren't left behind in the shift away from fossil fuels.

"Most conversations about climate change have treated coal workers as an afterthought," with insulting suggestions they can be retrained or just move, Dennison said. "The reality is many job-training programs haven't worked that well. And, by and large, we don't want to move and doing so would cost too much anyway."

Dennison said both politicians and environmental advocates need to change the way they view -- and talk about -- affected fossil fuel workers, who don't want to be treated as "a charity case."

'WHAT ARE OUR CHOICES?'

Kerry's comments at the Jan. 27 White House briefing on climate unfairly suggest it's easy to find a new job -- or that oil workers would be willing to move far from their current homes to find them, said Jerry, who supervises the construction of offshore rigs, pipelines and components at a fabrication yard in southern Louisiana. Jerry asked that his last name not be used, citing concerns his frank talk could harm his employer.

"What are our choices? They keep saying we have choices, but what are they?" Jerry asked. "Are we just supposed to lift our whole livelihood and move because they want to buy oil from outside the United States?"

Biden climate adviser Gina McCarthy tried to address the concern over jobs at the Jan. 27 White House briefing at which Kerry spoke.

"We're not going to ask people to go from the middle of Ohio or Pennsylvania and ship out to the coast to have solar jobs," McCarthy said. "Solar jobs will be everywhere, but we need to put people to work in their own communities."

That message may have been undermined the next day by a slip of the tongue when Harris touted new opportunities for skilled coal workers during an interview with West Virginia's WSAZ. New jobs could include plugging oil wells and "reclaiming abandoned land mines," Harris said.