Smith goes 'next level' for Hogs 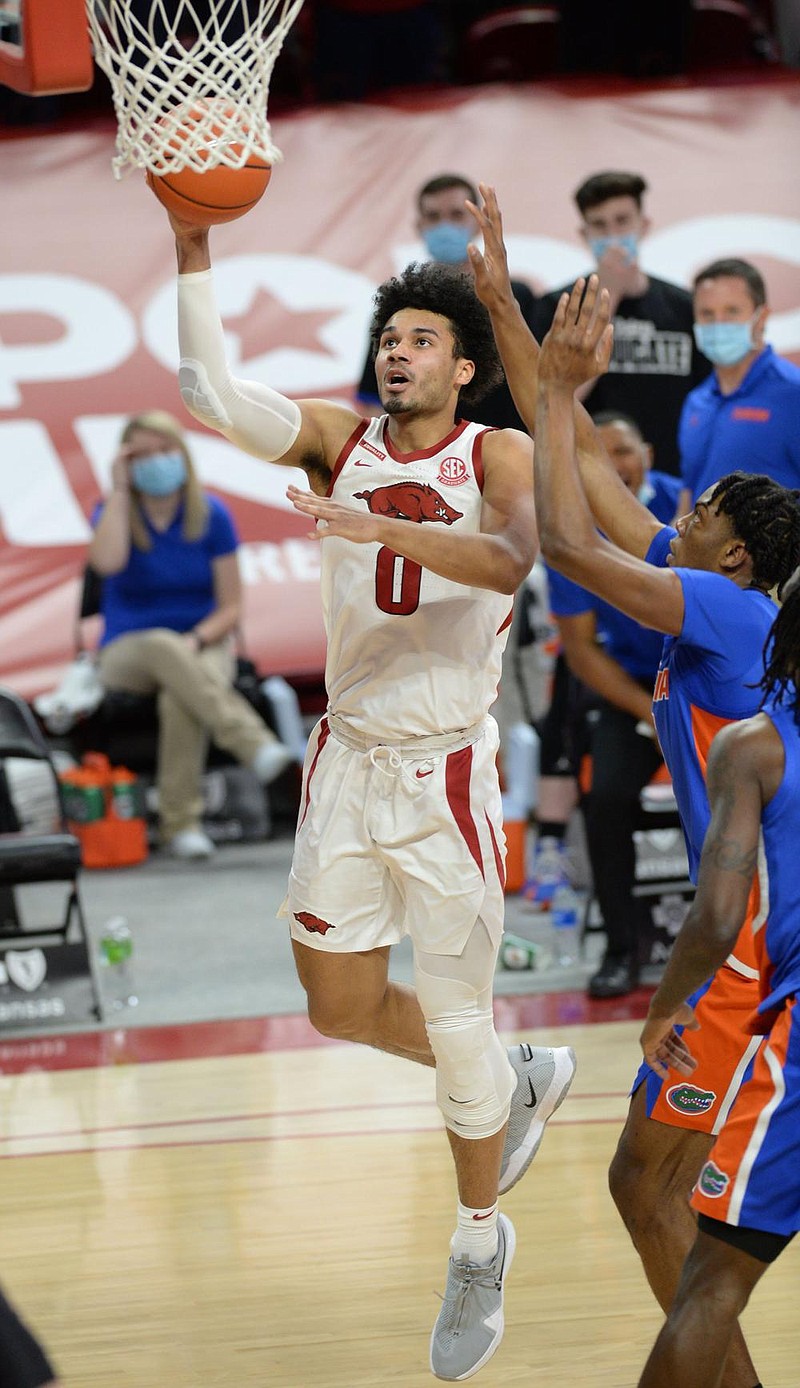 Arkansas forward Justin Smith goes up for a shot Tuesday during the No. 24 Razorbacks’ victory over the Florida Gators at Walton Arena in Fayetteville. Smith had 15 points on 7-of-9 shooting. (NWA Democrat-Gazette/Andy Shupe)

FAYETTEVILLE -- The University of Arkansas got balanced scoring from its top players and a huge all-around night from Justin Smith as the No. 24 Razorbacks subdued Florida 75-64 at Walton Arena on Tuesday night.

Smith scored 15 points on 7-of-9 shooting in 37 minutes, and he iced the game with a steal and free throw on a drive to the bucket in the closing seconds.

Smith also chipped in 6 rebounds and game-highs of 5 steals and 4 assists. When the Razorbacks hit an offensive lull midway through the second half, Arkansas ran isolations called their "Charlotte" play for the 6-7 grad transfer, and Smith delivered a couple of powerful drives and short jumpers through contact in the paint.

Coach Eric Musselman said Smith has returned to practice in recent days after coming back early from ankle surgery that kept him out four games.

"He's playing like a next-level player the last two games on both sides of the basketball," Musselman said. "I mean, he came back a little early from the injury because he's a great teammate and he cares about winning. I mentioned after the last game that it was the first game he didn't have pain and didn't have much swelling. But he's playing like we thought he would be capable of.

"He's a dominant player right now in the SEC on both sides of the ball."

Smith had a big steal from Florida forward Colin Castleton with help defense for Jaylin Williams during the Razorbacks' 14-2 finish.

"These are definitely some of my best games that I've played," Smith said. "It's just been a lot of hard work. A lot of late nights in the training room and also finding time to get my skill work in."

The Razorbacks had multiple players deliver offensively, with Davonte Davis leading the way with 18 points on 7-of-14 shooting. Jalen Tate and Moses Moody each contributed 14 points.

"He had like five steals," Davis said. "That's wonderful. As long as he continues to play hard, you see he's getting his groove back. We're loving that as a team, for sure."

Florida went 14 of 14 at the free-throw line, including a 5 for 5 night from forward Colin Castleton.

Arkansas snapped an eight-game regular-season losing streak to Florida and tightened the series to 26-13. The Razorbacks have played fewer games against the Gators than any other opponent except for South Carolina.

Florida Coach Mike White had been 8-2 against the Razorbacks, with the only losses being an 80-72 setback in the 2018 SEC Tournament in St. Louis and when he was head coach at Louisiana Tech. White had been 8-0 in regular-season games against Arkansas, which beat the Gators at home for the first time since an 80-69 upset of No. 2 Florida on Feb. 5, 2013.

The Razorbacks played at home as a ranked team for the first time since March 7, 2015, against LSU. Arkansas Coach Eric Musselman was an LSU assistant coach at the time, and the Tigers won the game 81-78 on Keith Hornsby's corner three-pointer at the buzzer.

After allowing sizzling three-point shooting to Kentucky and Missouri in its last two games, the Razorbacks tightened up the perimeter defense against the Gators.

"After the last two games of three-point shooting, we made a little adjustment," Coach Eric Musselman said.

Arkansas center Connor Vanover missed his first free throw of the season after opening 19 for 19. The miss came with 18:38 left in the game.

Arkansas had five offensive rebounds on the trip down the floor but wound up with one second-chance point on Vanover's second free throw to go up 43-30.

The Walton Arena crowd, with mostly of students, began the game by booing each time Florida guard Tyree Appleby touched the ball. Appleby, a native of Jacksonville, was not highly recruited and started his career at Cleveland State before transferring to the Gators.

Appleby went on to lead the Gators with 16 points on 6-of-14 shooting, including 1 of 7 from three-point range.

A pipe burst on the south side of Walton Arena during the arctic blast that led to a record-low temperature of -20 recorded at Drake Field overnight.

• Arkansas forward Abayomi Iyiola went through pre-game warmups with his teammates while wearing a brace on his knee.

• ESPN2's pre-game intro included video clips of Coach Eric Musselman sledding around campus, including being towed by a truck on Maple Street, just north of the Broyles Center lot.

• Kris Musselman, the mother of the Arkansas coach, was interviewed by phone early in the second half by ESPN announcers Karl Ravech and Jimmy Dykes.