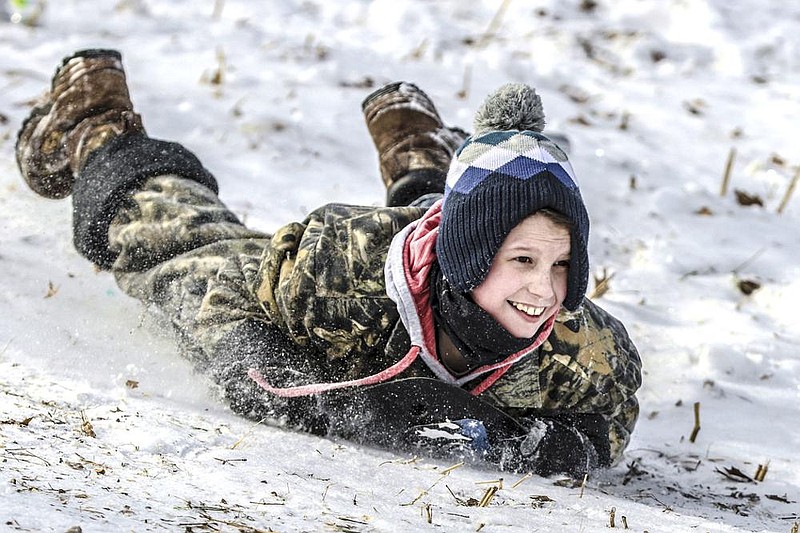 Javen Stallings, 11, slides down a hill at Chautauqua Park on Tuesday in Owensboro, Ky. (AP/The Messenger-Inquirer/Greg Eans)

Amy Cooper, the white woman arrested last year for calling 911 on a Black birdwatcher in New York's Central Park, had her criminal case thrown out Tuesday after she completed a diversionary counseling program that prosecutors said was meant to educate her on the harm of her actions.

Assistant District Attorney Joan Illuzzi-Orbon said Manhattan prosecutors were satisfied with Cooper's participation in the program -- described as an alternative, restorative justice solution -- and were not seeking to pursue the case any further. Such outcomes are standard for first-time offenders facing misdemeanor charges, Illuzzi-Orbon said.

Cooper, 41, drew widespread condemnation and was fired from her job as a portfolio manager at investment firm Franklin Templeton after frantically calling 911 on May 25 to falsely claim that she was being threatened by "an African American man" who had confronted her for walking her dog without a leash.

The confrontation, captured on video the same day Minneapolis police killed George Floyd, drew worldwide attention and was seen by many as a stark example of everyday racism.

Christian Cooper, the birdwatcher who recorded the video and was the subject of Amy Cooper's 911 call, said he had no reaction to the case being dismissed. There is no relation between Christian Cooper and Amy Cooper.

Amy Cooper's lawyer, Robert Barnes, praised prosecutors for a "thorough and honest inquiry" into the allegations and said he agreed with the decision to dismiss the case.

WASHINGTON -- Three sailors aboard the USS Theodore Roosevelt have tested positive for covid-19, the Navy said Monday, less than a year after an outbreak on the ship sidelined it in Guam for nearly two months.

The Navy said the three sailors have not had any symptoms, and they and others who were exposed to them are isolated on the aircraft carrier, which is conducting operations in the Pacific. They tested positive Sunday.

In a statement, the Navy said it is "following an aggressive mitigation strategy," including masks, social distancing, and proper handwashing and hygiene measures.

The outbreak on the ship last year was the largest the military has seen so far, with more than 1,000 sailors testing positive. One sailor died. Eventually all of the carrier's 4,800 crew members were sent ashore in Guam for weeks of quarantine, in a rotation that kept enough sailors on the ship to keep it secure and running.

The failure of the ship's leaders to properly handle the outbreak exploded into a leadership crisis. The ship's captain, who pleaded for faster action to protect his crew from the rapidly spreading virus, was fired and the one-star admiral on the ship had his promotion delayed.

NEW YORK -- Many New York City police discipline records can be made public over the objections of unions, an appeals court ruled Tuesday.

The Police Benevolent Association, representing New York City police officers, and other public safety unions had challenged the disclosures, particularly those deemed unsubstantiated or unfounded, and those in which officers were exonerated or a settlement was reached. The union argued that making the records public would unfairly taint the reputations of police officers, affecting their future employment.

But the 2nd U.S. Circuit Court of Appeals in Manhattan agreed with a lower-court judge, finding no evidence that job prospects for officers were harmed in numerous other states where similar records are available publicly.

The controversy arose after New York lawmakers, reacting in part to protests over the police killing of George Floyd in Minneapolis and other police misconduct, repealed a law last year that for decades blocked the public disclosure of disciplinary records for police officers, as well as firefighters and correctional officers.

WEBSTER GROVES, Mo. -- A behavioral health organization is shutting down its residential treatment facility in the St. Louis suburb of Webster Groves after an FBI raid and the arrests of three employees on suspicion of child abuse.

The St. Louis Post-Dispatch reported that Great Circle didn't explain what prompted the shutdown but said in a news release that the closure "will allow us to fully focus on the other important work we do in St. Louis and around the state."

Great Circle is Missouri's largest provider of residential treatment for children with developmental delays or behavioral challenges. It has 13 residential facilities.

Police reports said two women and a man in their 20s were arrested on Jan. 21 on suspicion of abusing a child or failing to report it. The reports said the arrests stemmed from an incident on Jan. 19, and list the occupations of those arrested as a teacher, youth care specialist and an intensive behavioral technician.