Information available for those needing to reschedule appointments by Alex Golden | February 17, 2021 at 7:33 a.m. 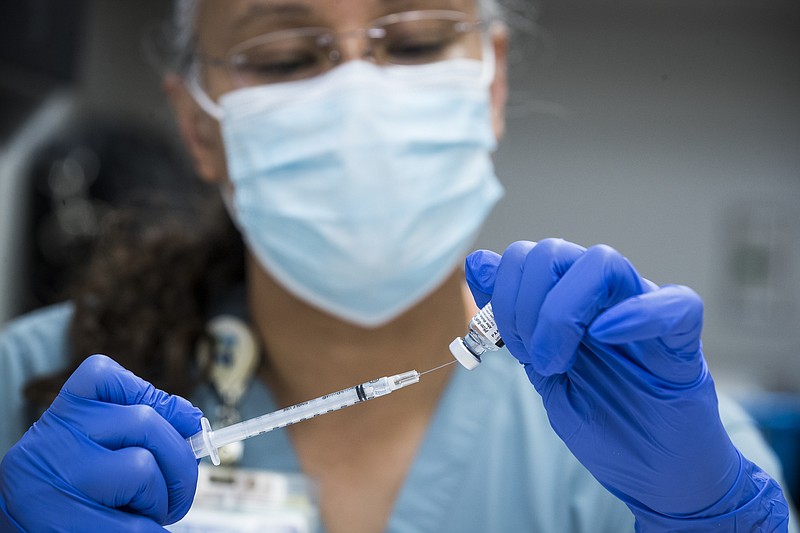 FILE - In this Thursday, Feb. 11, 2021 file photo, pharmacy technician Sochi Evans fills a syringe with a Pfizer-BioNTech COVID-19 vaccine at Texas Southern University in Houston. Coronavirus cases are continuing to decline in the U.S. after a winter surge. Researchers at Johns Hopkins University say the seven-day average of new coronavirus cases in the country dropped below 100,000 on Friday, Feb. 12 for the first time since November 4. (Brett Coomer/Houston Chronicle via AP, File)

The winter weather is keeping some Northwest Arkansas residents from getting covid-19 vaccinations.

Patients who are unable to make it to their appointments should immediately consult the pharmacy where they were scheduled to receive their vaccine to discuss options, according to a statement from the Arkansas Pharmacists Association.

“If a pharmacy may be closed, try looking for information on the pharmacy’s social media pages,” according to the statement.

Washington Regional Medical System canceled its drive-through vaccination events for patients scheduled to receive their second dose, according to Natalie Hardin, spokeswoman for the system.

“Individuals who had vaccination appointments scheduled this week, Monday through Thursday, will be contacted to reschedule as soon as the weather is no longer a safety concern for team members and patients,” Hardin wrote in an email.

Mercy Health System said in a statement patients who need to reschedule appointments for vaccinations should call (833) 364-6777.

Medical Arts Pharmacy in Fayetteville continued to give vaccines Tuesday. Anyone who cannot make it to their appointment for a first dose will be rescheduled for a later date. Those who cannot make it for their second dose may go to the pharmacy between 2 and 5 p.m. any weekday, according to its Facebook post.

Andrew Mize, pharmacist at Debbie’s Family Pharmacy in Rogers, said several people canceled late last week because of the weather, so the staff scrambled to use the doses. The pharmacy has the Pfizer vaccine, which must be kept frozen and then thawed and used within a few days. They called people on their waiting list to fill the canceled appointments, Mize said.

The association recommended pharmacies make sure they are on a commercial-grade generator in case of loss of electricity because the vaccines need to be refrigerated or frozen, depending on the vaccine. Pharmacies without a generator were told to coordinate with another pharmacy or hospital with a generator and temporarily move their vaccine supplies.