10 soup recipes to try as winter weather remains in Arkansas 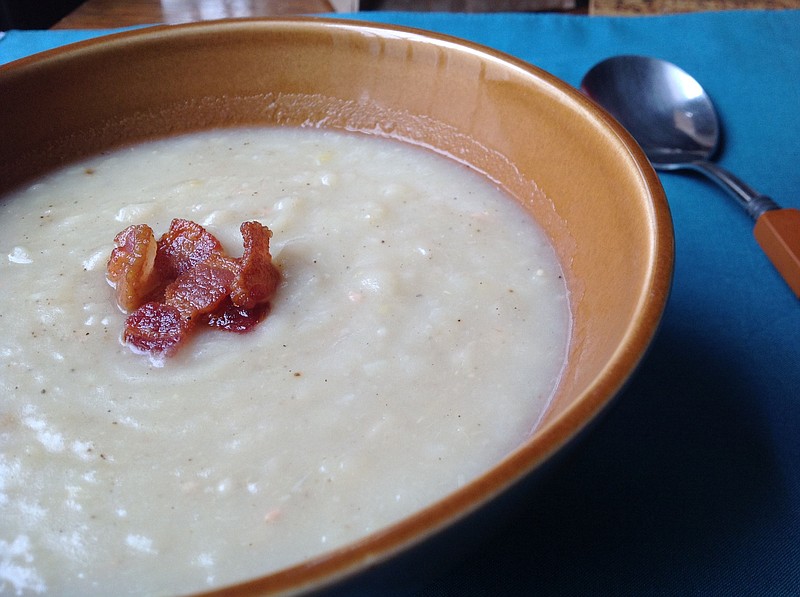 During a week of frigid temperatures and heavy snowfall, keeping warm is key and a bowl of soup can help. Here are 10 recipes, created by food editor Kelly Brant and pulled from the archives, to try as Arkansas weathers the cold.

In a large pot, melt the butter over medium heat. Add the garlic (and diced onion, if using fresh onion) and saute until tender. Sprinkle in the flour and whisk until flour is completely coated in butter and the flour is lightly browned. Whisking constantly, slowly pour in the broth and then the milk, whisking until incorporated. Add the onion base (if using), broccoli, carrot and celery seed. Bring to a boil, and then reduce heat to simmer. Cook until broccoli and carrots are tender, about 8 minutes.

Remove from heat and puree to desired consistency using an immersion blender or working in batches with a traditional blender. Return to low heat and stir in the half-and-half, and then add the cheese, one handful at a time, stirring until cheese is completely melted between additions. Serve immediately.

Note: Look for onion base with the broth and bouillon at the supermarket. If you can’t find onion base, saute 1 small diced onion with the garlic until tender and golden brown.

Heat the olive oil or bacon drippings in a large saucepan over medium heat. Add the leeks and a small pinch of salt and cook, stirring frequently for 3 minutes. Add the potatoes and beans and stir to coat. Add the broth and enough water to just cover. Bring to a boil, reduce heat and simmer, 25 to 30 minutes or until potatoes are tender. Using an immersion blender, puree soup to desired consistency, adding more water or broth if necessary. Season to taste with salt and pepper. Garnish with bacon, cheese or chives, if desired.

Bring the broth to a simmer in a pot. Add the rice and cook until tender, about 15 minutes. In a mixing bowl, whisk the egg yolks until thick and pale. Whisking constantly, slowly drizzle in the lemon juice, whisking until frothy. Reduce heat on broth-rice pot to low.

Gradually ladle the hot broth rice mixture into the egg yolk mixture, whisking constantly. When about half to three quarters of the broth mixture has been whisked into the yolk mixture, whisk the yolk-mixture into the remaining broth mixture in the pot. Cook over low heat just until heated through. Do not let mixture boil. Season to taste with salt and pepper. Serve immediately garnished with parsley, if desired.

Heat oil in a Dutch oven or soup pot over medium-high heat. Add the onion, carrots and celery and saute until onion is translucent. Stir in the spices, oregano, salt and pepper and cook 1 minute. Stir in broth, tomatoes, beans, corn (if using) and quinoa. Bring to a boil; cover, reduce heat to medium-low and simmer 20 minutes or until quinoa is tender. Thin with additional broth or water, if necessary. Serve garnished with avocado, cilantro and lime.

Add the sesame oil, then add the salt and pepper. Taste and adjust seasoning. Slowly pour the egg into the soup in a steady stream, stirring or whisking constantly. The egg should cook immediately and look like long yellowish-white strands. Remove from heat as soon as you see the strands appear. Serve immediately.

Recipe adapted from The Chinese Takeout Cookbook: Quick and Easy Dishes to Prepare at Home by Diana Kuan

Heat broiler. Have ready a large bowl of ice and water. Cut each pepper in half through the stem. Remove and discard stems, cores and seeds. Arrange peppers, cut-side down, on a foil-lined broiler pan. Broil peppers, rotating occasionally, until skins are uniformly blackened.

Transfer peppers to the bowl of ice water to cool for 10 minutes. The skins should come right off. Pat peppers dry and coarsely chop.

In a large pot, heat about 1 tablespoon olive oil over medium-low. Add garlic and cook until fragrant, about 1 minute. Stir in the chopped peppers, 2 cups of the vegetable stock and a pinch of salt and pepper. Using a hand blender, puree the pepper-stock mixture, then bring to a boil. Turn heat to low and simmer 15 minutes. Add tequila and half-and-half; taste for seasoning. Thin with remaining broth, if necessary. Cook just until heated through. Serve immediately with chopped cilantro, or chill soup and serve it cold.

In a 6-quart slow cooker, combine the potatoes, beer, broth and black pepper. Cover and cook on low 7 hours or 4 hours on high, or until the potatoes are tender. Remove and reserve about 1 cup of the cooking liquid. Mash potatoes using a masher or immersion blender. If mixture is too thick, whisk in the reserved cooking liquid. Stir in the cheeses and cook on low until cheeses melt. Serve garnished with green onions and shredded cheese.

Sprinkle with flour and stir. Add the sherry, beef stock and chopped thyme. Bring to a boil, reduce heat and simmer, partially covered, for 30 minutes. Season to taste with salt and pepper.

Cut off the root tips and the tough green tops of the leeks. Cut each leek in half lengthwise, then cut into ½ -inch thick slices. Place sliced leeks in a bowl of cold water and swish thoroughly, letting the sand and grit sink to the bottom. Using a slotted spoon, remove leeks from water to a tea towel or several layers of paper towels to drain.

Melt the butter in a heavy saucepan. When it foams, add the potatoes, onion and drained leeks and toss them in the butter until they are well coated. Season with salt and ground black pepper and toss again. Cook, covered, over a gentle heat for 10 minutes, or until the vegetables are soft but not browned.

Add 3 ½ cups stock and bring to a boil; reduce heat and simmer 5 minutes or until potatoes can be easily pierced with a fork. Working in batches, puree soup until silky smooth. Taste and adjust the seasoning, if necessary. Return the soup to a clean pan and stir in milk. If the soup is too thick, add enough of the remaining stock to reach desired consistency. Cook until hot, but not simmering.

To serve: Ladle soup into small bowls. Top with a scattering of chives and black pepper and serve at once. Makes 4 to 6 servings. Recipe adapted from bbcgoodfood.com