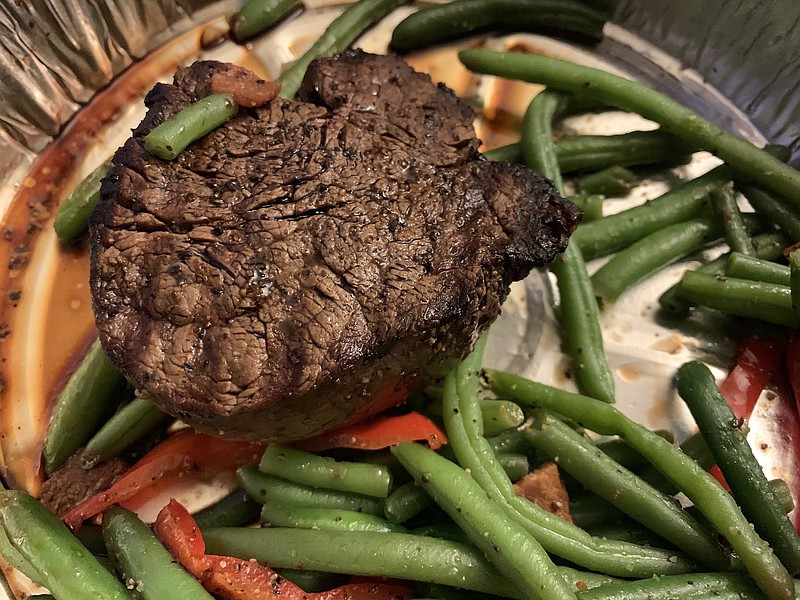 This week, we ate meat — steak and barbecue. We ate seafood. We even ate vegetarian.

Which only goes to show that even if you’re getting it to go, there’s still plenty of dining variety to go around.

As has been our practice, we’ve stuck (mostly) to local restaurants, from mom-and-pop operations to semi-corporate establishments; we’ve been maintaining a 15-minutes-to-home radius (within a minute or two) so food should still be warm when it hits our table; and we pay for our meals.

WHAT WE GOT: 6-ounce filet ($42), with green beans and a fully loaded baked potato; French Onion Soup au Gratin ($9)

Our major “beef” with this venerable River Market steakhouse has always been that, as the menu puts it, “All Steaks Cooked Sonny’s Style,” and Sonny’s style has, heretofore, always involved a seasoning mix that has dominated, if not outright obscured, the taste of the steaks.

Not any more, or at least that wasn’t the case this time. Our filet, just a tiny touch on the rare side of the medium rare we ordered, was lean, tender, effortless, juicy, judiciously seasoned and delicious — and we tasted the meat and not the seasoning.

The green beans, more along the line of haricots verts, actually had more seasoning than the steak. They were delicious, too, and just the right spot on the firm-to-chewy scale. We got to load the mammoth baked potato we chose as our other side item ourselves, from separately packaged cups of bacon bits, chives, shredded cheese, sour cream and butter.

Handing us a tall, plastic-wrapped foam cup made us extremely dubious about the French onion soup, but once we shed the plastic — which, by the way, helped keep it hot as well as preventing potential spills — and popped the lid, it turned out to be almost shockingly glorious. The comparatively delicate broth was rife with onions; the crouton was large but not-yet-too-soggy. And just underneath the surface, we found an acre of mostly melted gruyere that took us much longer to chew through than we had expected. Bravo.

HOW IT WENT: We scanned the currently limited menu online and placed our order over the phone, picked it up and paid for it at the bar in the 25-30 minutes it was promised to us. The bartender even asked if we needed help getting our order to our car, which we declined.

HOW IT’S GOING: The restaurant was busy with a number of well-spaced tables on a weekend evening. There was at least one other to-go order awaiting pickup. 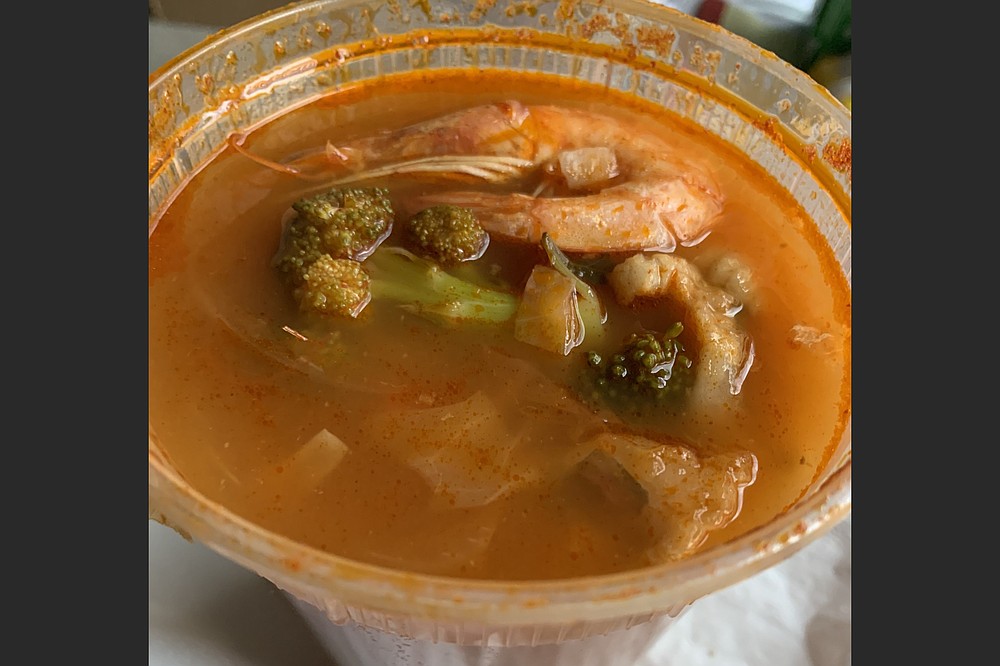 Once upon a time, this was the place we automatically touted when asked to recommend an authentic Mexican restaurant. But we don’t get down to southwest Little Rock as often these days and cannot remember just how long it has been since we last visited. And as we had occasion to be in the vicinity, we decided to renew our acquaintance.

Our first plan was to visit one of the chicken-and-mole dishes we’d enjoyed there, but as our eye crossed the menu it was diverted by the Siete Mares — in English, “Seven Seas,” a seafood vegetable soup. The menu specifies shrimp, fish, clams, octopus and calamari; we encountered a lot of fish, a handful of shrimp — head on, tail on, legs on, shell on, which made them a bit messy when extracting them, hands on, from soup. Ditto the bits of bonus crab legs and the crab claw. We didn’t really see clams and if there was any octopus it was minimal, but we did find couple of mussels and some surimi (quasi-crab). And it came with a tall foam cup of extra broth.

The menu describes the guacamole as “pico de gallo and avocado,” and that’s pretty close to what we got — a lot of fresh avocado, with a lot of onions, which completely dominated to the point that we really didn’t notice any flavors (citrus, garlic, etc.).

HOW IT WENT: We ordered and paid in the open dining room, and had a substantial wait — close to half an hour — for our food. 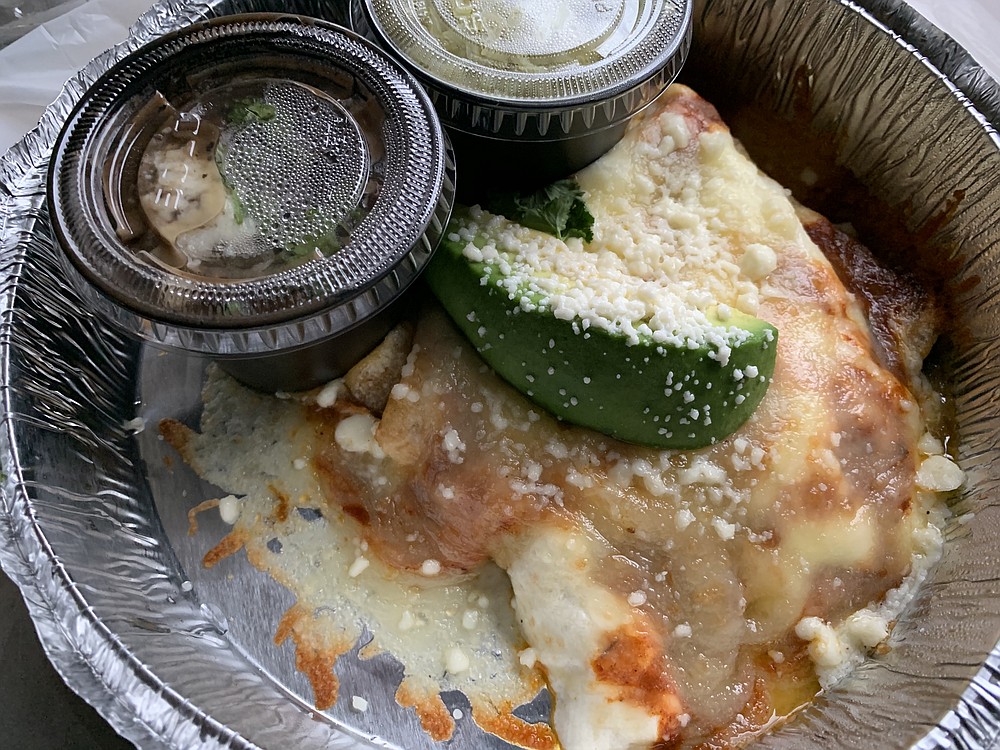 Spinach Enchiladas, with side black beans and cilantro lime rice in separate cups, was part of an all-vegetarian meal from Local Lime. (Arkansas Democrat-Gazette/Eric E. Harrison)

Yellow Rocket Concepts’ upscale Southwestern taqueria isn’t quite the westernmost restaurant in town, but it’s close. And while it was on our normal pre-pandemic trade route, the presence of less-upscale but closer restaurants has kept it a little out of reach.

And by some chance, our entire meal turned out to be vegetarian.

We were looking for something mild and not too risky, so we chose the spinach enchiladas, which fit that bill pretty well: spinach and artichoke with Manchego and jack cheeses, topped with more sour cream than red chile sauce and a big wedge of fresh avocado. It was obviously cooked right in the round aluminum to-go pan, and we would have enjoyed it if it had still been hot by the time we got it home — it should have been hotter, as witness the still-piping sides, vivid black beans and lively cilantro lime rice, in separate plastic cups inside the pan, both of which were as delicious as we remember.

Our Market Corn, in a plastic clamshell container, was tasty but also had lost its heat: two pieces of street-style grilled corn on the cob topped with Mexican crema, Cotija cheese, cilantro and a New Mexican chile powder. We devoured it with enthusiasm nonetheless, even though the “left” piece, which had more crema and less chile powder, looked a trifle, well, old.

HOW IT WENT: We took a chance and ordered and paid on the premises; the dining room is open. Since the tiny waiting area in the front of the restaurant isn’t structured for social distancing, folks waiting for tables or to-go orders are consigned to their cars; in our case, we pulled our vehicle right into the first of four curbside handover spaces right outside the restaurant’s front door. We were told 15 minutes, and that’s just how long it took.

HOW IT’S GOING: All four curbside spaces were filled at one time or another while we waited. Several parties of dine-in customers entered while we waited as well. 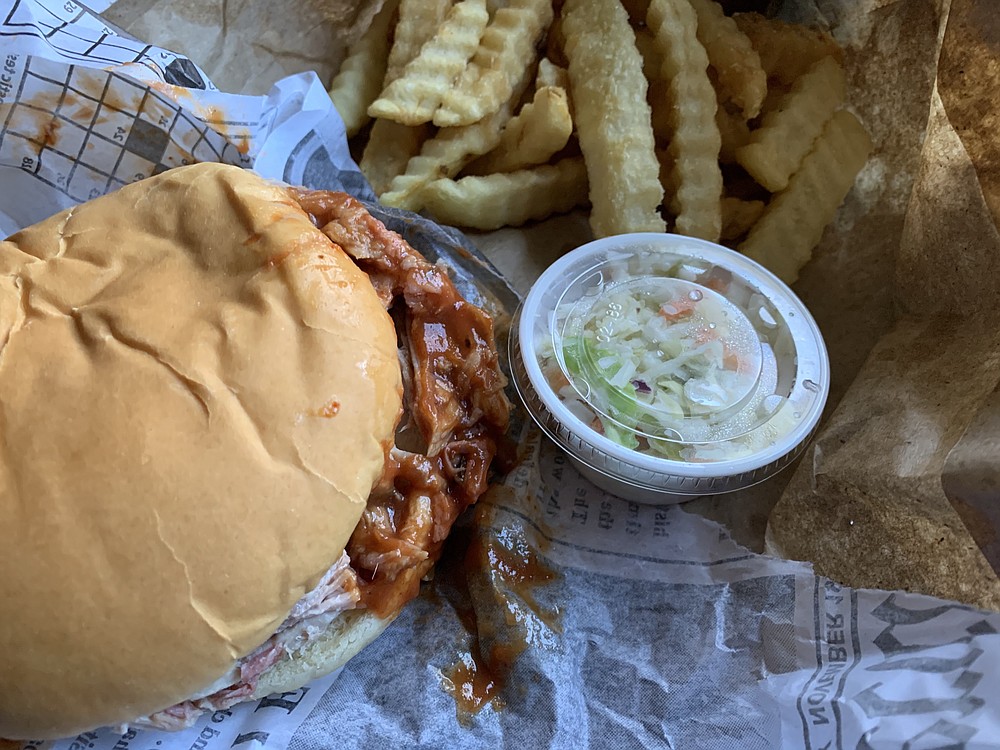 Mick’s brags on its Facebook page about its hickory-smoked pork butt — “BEST hickory smoked pork butt in the land!!” — and from the evidence of the ample sandwich we got as part of our combo, with fries and a 16-ounce drink, we’re not disposed to dispute the claim, at least not very strenuously. Though we didn’t maybe get as much of the tangy sauce as we’d have liked (extra sauce is available, but according to a faded sign on the window, it costs extra). We got the slaw on the side. The crinkle-cut fries were excellent, firm on the outside, soft on the inside, and unlike the sandwich, which was cold to the point of chilly-ness, they were still warm when we got them home.

HOW IT WENT: Mick’s is an old-fashioned barbecue shack, vending through a screened window, no inside seating but with wooden picnic tables out front. It took about 10 minutes for our order to come out through the window.