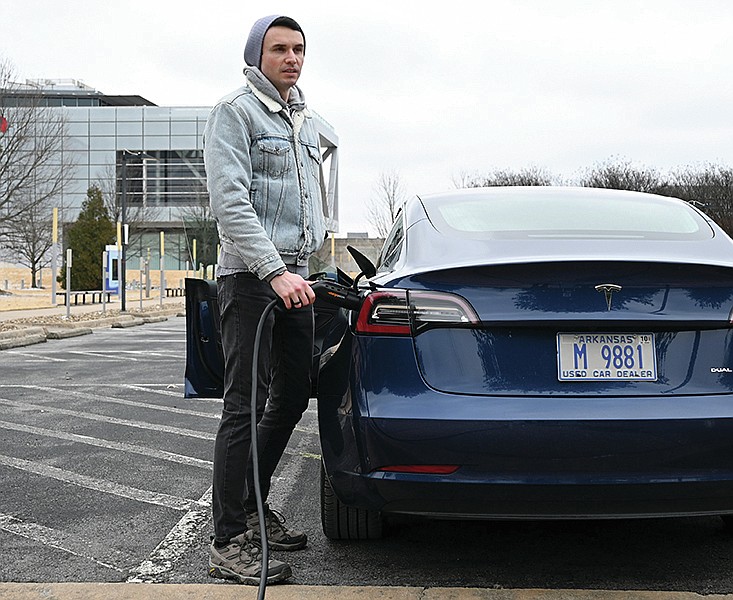 Jay Ward, president of EV Arkansas Chapter, an informal club for electric vehicles, charges his Tesla 3 outside the Clinton Center on Friday, Feb. 12, 2021. Arkansas Energy and Environment is hoping to convince apartment complexes, workplaces, and other properties to apply for funds to get Arkansas a strong electric vehicle charging infrastructure. (Arkansas Democrat-Gazette/Stephen Swofford)

Back up: What’s electric vehicle usage like in Arkansas?

According to U.S. Department of Energy data analyzed by QuoteWizard, an insurance comparison site, the state is ranked:

In Arkansas, 1,709 electric vehicles are registered — that's less than 0.01% of the 4.1 million registered vehicles in the state, according to the Department of Finance and Administration.

About 0.5% (21,213) are hybrids, which run partly on gasoline, like a conventional car, as well as an electric motor and battery.

Where are stations currently located?

Arkansas has an estimated 202 EV charging locations with 434 individual stations.

According to an Arkansas Democrat-Gazette analysis of entries on Plugshare, a popular electric car driver's app:

• Thirty-seven of Arkansas' 75 counties have no charging locations

Okay. What are the new programs going to do?

Those stations can charge electric vehicles in eight hours or less using a 240-volt output, according to the department.

The nonprofit Adopt a Charger also has plans to install charging stations in 10 locations across the state with the help of a $160,000 grant from Entergy Corp.'s Environmental Initiatives Fund, according to a news release.

It broke ground Feb. 1 at the first location, Flagpole Park, in Lonoke, after the City Council unanimously approved the fee-free charging stations.

Although owners typically charge their electric vehicles at home overnight, generating enough power to go about their daily routine, charging station "deserts" can be a deterrent to both in- and interstate travel.

Read more from reporter Ashton Eley about the status of electric vehicle use in Arkansas and hear from those who currently drive them.