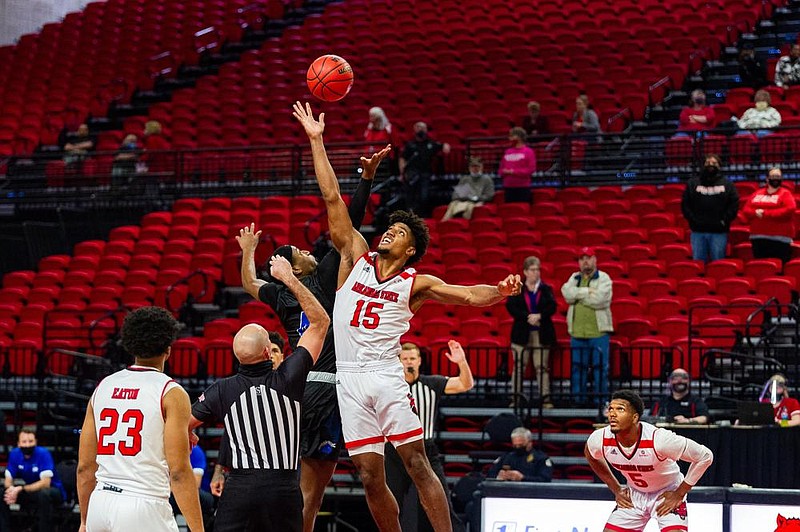 Arkansas State freshman Norchad Omier is the first player from Nicaragua to compete in Division I college basketball. He is averaging 12.4 points per game and leads the Sun Belt Conference with 11.5 rebounds per game. (Photo courtesy of Arkansas State University)

Family, friends and the seafood of the Caribbean coast feel distant. In Jonesboro, the closest Omier comes to home-cooking are meals at Los Arcos Mexican Restaurant.

"I eat Mexican food," he said. "It's different, but it's the closest thing I could compare with it."

Comfort on the basketball court in the United States has come easier.

Omier recorded 46 consecutive double-doubles in his lone season at Miami Prep, where he battled homesickness and competed with elite recruits such as 2020 NBA Draft pick Kenyon Martin Jr.

As a freshman at Arkansas State University, the 6-7 forward has made 17 starts for the Red Wolves and leads the Sun Belt Conference with 11.5 rebounds per game.

Sitting in an office inside ASU's First National Bank Arena recently, 2,870 miles away from home, he wonders not only when he'll get home next but how the country he left in relative anonymity a year and a half ago will be different now.

"I'm a little scared, actually," Omier said. "I don't think it's going to be the same. A lot of people are going to know me. I just want to hang out with my family and friends. It's going to be a little bit harder now."

Omier is the first player from Nicaragua to compete in Division I college basketball, and he's become a sensation in the Central American country of 6.5 million people. His instant impact at ASU, where he is averaging 12.4 points per game, has heightened the phenomenon.

Omier's claim as the only freshman in the nation averaging a double-double has drawn mild national attention, but it's nothing compared to the clamor in Nicaragua. Thousands scour social media for updates on his performances, stream Red Wolves games online -- legally or otherwise -- and seek ASU apparel.

"People ask me how they can get a jersey with a last name and a number," said Levi Luna, a sports media personality who broadcasts the NBA, MLB and boxing in Nicaragua. "The NCAA doesn't sell anything like that."

Omier is a trailblazer in his home country, and his stardom has risen to heights he doesn't fully understand.

"I'm telling him when he comes to visit, he's going to be overwhelmed," said Wesley Savery, the vice president of the Basketball Federation of Nicaragua. "There is a Norchad-mania going on right now in this country and we love it."

Nicaragua is a nation dominated by sports such as baseball, boxing, volleyball and soccer. Omier is its first basketball star.

Tony Chevez, one of 26 MLB players from Nicaragua, returned to build homes in his city of Telica.

But few athletes gripped the country quite like Dennis Martinez, the first player from Nicaragua to reach baseball's highest level when he did so in 1976. Martinez went on to throw the 13th perfect game in MLB history in 1991 for the Montreal Expos.

Luna, who has been covering sports across Nicaragua since 2002, saw as a child the national pride his father and other Nicaraguans took in Martinez's accomplishments.

"It was like an obligation for your father to introduce you to who Dennis Martinez was," Luna said. "You needed to know, man,"

Omier played -- and excelled in -- a multitude of sports growing up.

He threw a baseball 95 miles per hour at 16 years old before ditching the diamond for the basketball court because baseball wasn't stimulating enough. Omier broke at least three basketball rims as a teenager while growing into his 6-7 frame.

As a teenager he marveled as Cheslor Cuthbert, from the nearby Corn Islands, played for the World Series champion Kansas City Royals in 2015. In Nicaragua, it didn't matter that Cuthbert had 50 plate appearances all season and wasn't on the World Series roster.

"His first year he went there, they won a championship," Omier said. "He meant a lot to us. We looked up to him."

On nights like last Friday, when Omier registered his 11th double-double of the season in a 73-62 win over the University of Arkansas at Little Rock, he would grab his phone and find it flooded with messages on Whatsapp and Instagram.

He has admirers of all ages, but the messages most often come from young basketball players in Nicaragua. Many are a part of La Academica de Basketball Bluefields, the same development program where he honed his skills.

Omier has become that next Nicaraguan star just 18 games into his ASU career, a model for a generation of basketball players behind him.

"It doesn't feel like a big deal to me," Omier said. "I feel like the same Norchad I've always been. These kids always text me and tell me they're looking up to me, and I know that's a great responsibility to set an example."

Savery heard Norchad Omier before he saw him on a basketball court.

"I was walking into the gym, and I heard that beautiful sound of a shaking rim," the former professional basketball player said. "I thought, 'Who the hell is dunking in this gym? The last person dunking in here was me.' "

In the 1980s, Savery became the youngest member of the Nicaraguan national team at 15, then played in the United States at NAIA Palm Beach Atlantic. He later competed as a pro across Central America in the 1990s, and in Greece with Panathinaikos, where he was released to make room for nine-time NBA All-Star Dominique Wilkins.

In January 2018, Carlos Parson, Omier's coach in Bluefields, alerted Savery to a young player he had to see. It was Omier rattling the rim inside the Gimnasio Multiuso, and Savery recognized the talent in front of him immediately.

"I told Carlos, 'I need to meet this kid's parents tomorrow. We need to get him out,' " he recalled.

Savery soon lined up an opportunity for Omier to join a professional team in Mexico. But first, Savery and Omier attended a camp run by Miami Prep Coach Art Alvarez -- a mentor to ASU Coach Mike Balado -- to pique interest from prep schools.

On Day 2, Alvarez himself offered Omier a spot at Miami Prep, which cost $22,000 in tuition. Savery called his wife and told her to sell one of their two cars.

"No matter what, I'm going to get this kid into school," he told her.

Omier gained attention from rival prep school coaches the next day, and Alvarez cut the fee in half. On the final day of the showcase, as coaches swarmed the camp MVP from Bluefields, Omier had a full scholarship offer to Miami Prep.

In his first true year of organized basketball, Omier used his physicality -- as he did in Nicaragua and has at ASU -- to cover for his inexperience. He averaged 26.7 points and 20.3 rebounds per game, leading Miami Prep to a 41-5 record.

He performed on the court in Miami as his heart ached for home. Omier kept to himself, playing during the week and spending weekends with a nearby uncle, who delivered a piece of home.

"My uncle was the only blood family I had there," Omier said. "That was a big relief for me."

Omier still thinks often of home. He's becoming comfortable with how life might be altered there, and he tries not to focus on the media attention.

Instead, he's setting sights on making a trip home -- this summer, maybe -- and replying to messages he receives from basketball players across his country, thinking of the words Savery gave him 18 months ago.

"Wesley told me that he wanted me to open doors," Omier said. "I hope that I can do that for future players. I want to show people that people in Nicaragua have talent and that they can go there looking for more talent."

Doors already are opening. Because of Omier's success, Savery plans to bring more players to Alvarez's showcase this year.

In Jonesboro, Omier is a leading contender for Sun Belt Conference freshman of the year honors, and has been key in the Red Wolves' late season resurgence. After a 3-5 start to conference play, ASU has won five of its past six and holds second place in the Sun Belt's West Division. Omier averaged 11.2 points and 11.0 rebounds during that six-game stretch, including a 20-rebound performance in an 83-75 overtime victory Jan. 29.

But Balado is protective of his 19-year-old forward.

"I just want to keep him grounded," Balado said. "You never know what the future holds."

In Nicaragua, people are thinking bigger.

"Norchad has done a favor for everyone in the business of basketball here," Luna said. "Norchad ended the conversation of who is the best basketball player in the history of our country. It's locked."

CHALK TALK Omier is the only freshman in the country averaging a double-double (12.4 points, 11.5 rebounds per gae). … He set a career-high with 22 points and eight made field goals against Louisiana-Monroe on Jan. 16. His best rebounding performance came against Texas-Arlington on Jan. 29, when he recorded 20. … Omier came to the Red Wolves after one year at Miami Prep. … He is the first player from Nicaragua to compete in Division I college basketball. 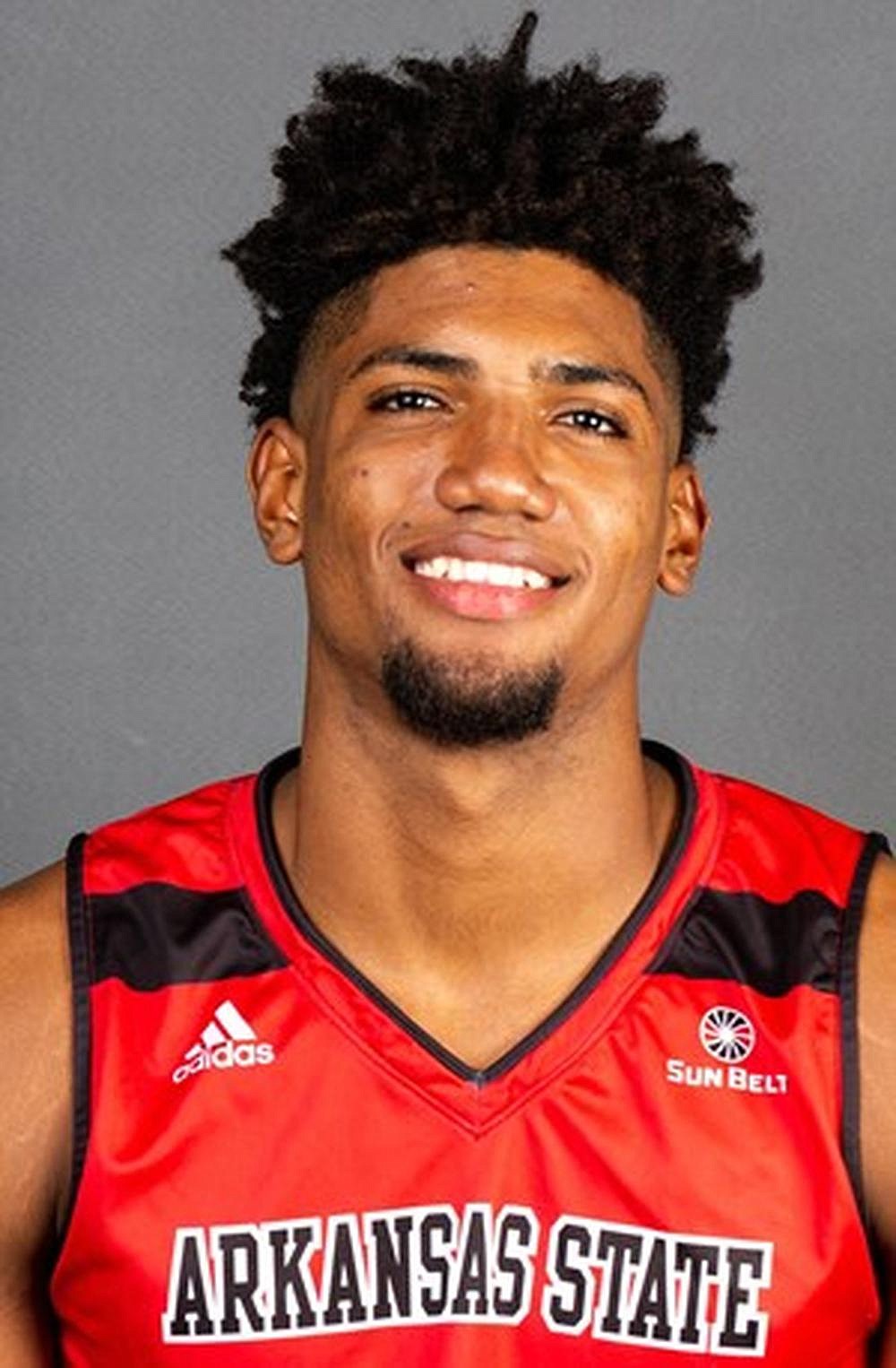