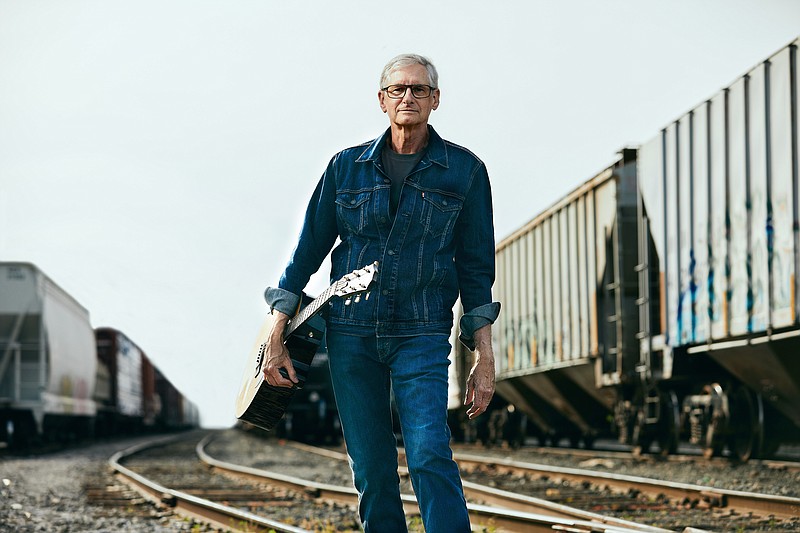 Folk singer-songwriter Jim Stanard’s song “Arkansas” is about the Elaine massacre in 1919 in Phillips County. (Special to the Democrat-Gazette/Andres Martinez)

Arkansas seems to have become something of a hot topic, culturally, in recent days. There's an acclaimed movie, "Minari," about a family of Korean immigrants moving to the state (though it was filmed in Oklahoma), plus a couple of songs simply titled "Arkansas," the best-known of which is by Chris Stapleton. His song was reportedly inspired by his drive home to Nashville, Tenn., after traveling to Oklahoma to pick up a Porsche his wife had bought for him.

The other song is by Jim Stanard, an insurance professional for some 50 years who also is a folk singer/songwriter, whose song and video concerns the aftermath of the 1919 Elaine massacre in Phillips County.

"I saw something about that in 2019, when it was the centennial of when that happened," Stanard says from his home in Avon, Colo. "Before that, I had read a short story, 'Montana 1948,' which concerned the matter of personal responsibility, how a lawman might see such things. I started working on a song that dealt with how that might affect a person."

Learning about something shocking that had been comparatively brushed aside by historians got Stanard to set to work writing a song about a law enforcement officer who looked back on his life after failing to do what he knew to have been the right thing.

"I was encouraged in my songwriting by Kip Winger," Stanard explains, referring to the leader of "hair metal" band, Winger, whom he met at a fantasy rock music camp Stanard attended. Winger produced the song, which includes appearances by Afghan Whigs' guitarist Jon Skibic and backing vocals by Peter Yarrow (Peter, Paul & Mary) and his daughter, Bethany.

The song, featuring Peter and Bethany Yarrow, is on Stanard's sophomore album, "Color Outside the Lines," and the song's video, available on Stanard's YouTube channel, was filmed in Sparks, Nev.

(The likelihood of any live music venues being open is still in doubt, so call the venue before making a winter trek.)

Sunday, Stickyz will feature a "belated" 2 p.m. Valentine's Day show by Randall Shreve. Admission is free, but reservations for tickets are required. Doors will open at noon.

"Mad Battle," the first live show of the year in El Dorado, will be a battle of seven bands at 6 p.m. Saturday at First Financial Music Hall. Tickets are $10 in advance, $15 the day of the show, with children age 6 and under admitted free.

Singer-songwriter-humorist Steve Poltz will perform at 9 p.m. Friday in a livestream show from the Belly Up in Solana Beach, Calif., in his 12th annual 50th birthday bash. Poltz, one of the funniest, most musically talented musicians we've ever seen, promises the show "will have seven camera angles and is professionally recorded and is still as irreverent as all get up."

Tickets, $20, are available at boxoffice.mandolin.com.

◼️ The Nashville Trio — Meg Williams, Jenny Teator & Sheridan Gates — will perform at 6 p.m. Friday as part of the Can't Stop the Blues festival on Facebook.

◼️ Todd Snider, who has hosted a folksy hippie-vibe weekly show on Sundays since the coronavirus shut down live shows in clubs, is taking the month of February off, but plans to return in March. (Snider's two nights of shows at South on Main in February 2020 were among the last in Central Arkansas.)

"Allen Ginsberg at Reed College" — the first recorded reading by "beat" poet Ginsberg — is being released on CD, digital and vinyl record platforms on Friday.

No Depression, The Journal of Roots Music, posted an article, "Does Morgan Wallen Represent Country Music?" See nodepression.com and click on "Stories."

To submit an event for Music Madness, email jackwaynehill@gmail.com or jmcleod@adgnewsroom.com.