Weather slows vaccinations push across much of U.S. 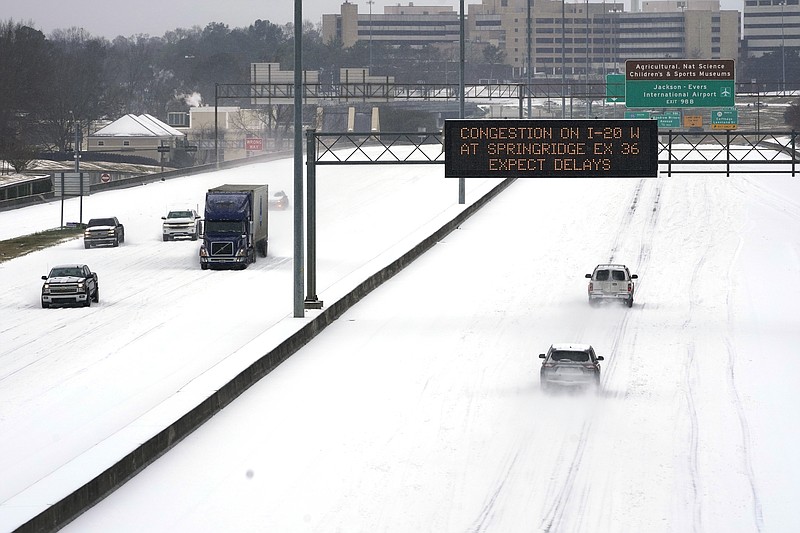 An electronic message board advises drivers of potential congestion on the intersecting interstate as they drive south on Interstate 55 in north Jackson, Miss., Monday, Feb. 15, 2021, as light snow mixed with sleet, and rain continue to cover much of the state. The National Weather Service forecasts temperatures barely hovering at 20 degrees Fahrenheit, and likely slipping into the single digits by Tuesday morning. A winter storm warning continues throughout the state. (AP Photo/Rogelio V. Solis)

ATLANTA -- The icy blast across much of the U.S. injected more confusion and frustration into the nation's covid-19 vaccination drive Wednesday just when it was gathering speed, snarling vaccine deliveries and forcing the cancellation of countless shots around the country.

Across a large swath of the nation, including Deep South states like Georgia and Alabama, the snowy, slippery weather either led to the closing of vaccination sites outright or held up the necessary shipments, with delays expected to continue for days.

In New York City, Mayor Bill de Blasio said doses expected this week were delayed by weather elsewhere in the country, forcing the city to hold off making 30,000 to 35,000 vaccination appointments.

One public health expert said the delays were unacceptable.

"Having vaccine centers take snow days is just going to back things up more than they already are," said Dr. Amesh Adalja, senior scholar at the Johns Hopkins Center for Health Security. "The virus doesn't take snow days."

Adalja said people in charge of vaccination efforts need to find ways to be more resilient to weather, "just like mailmen can deliver the mail through sleet or snow." He suggested clinics use better contingency plans. The goal, he said, must be "a continuous assembly line of vaccines going into people's arms."

In Washington, White House covid-19 coordinator Jeff Zients said: "People are working as hard as they can, given the importance of getting the vaccines to the states and to providers, but there is an impact on deliveries."

He added that in places where vaccination sites are closed, like Texas, the government is encouraging sites to increase their hours once they are open.

"We want to make sure that as we've lost some time in some states for people to get needles in arms, that our partners do all they can to make up that lost ground," he said.

The U.S. is vaccinating an average of 1.7 million Americans per day against covid-19, up from under 1 million a month ago. New figures from the White House show a steady increase in the pace of vaccinations over President Joe Biden's first month in office.

[Video not showing up above? Click here to watch » https://www.youtube.com/watch?v=aGq0oHRF6sE]

Much of the increase, according to data from the Centers for Disease Control and Prevention, comes from people receiving their second doses. The pace of first-dose vaccinations has been largely steady over the past several weeks, hovering around an average of 900,000 shots per day.

Biden is on track to surpass his goal of 100 million shots in his first 100 days in office -- though the pace must pick up even further to meet his plans to vaccinate nearly all adults by the end of the summer.

Also Wednesday, the White House announced a scaled up push to expand DNA mapping of coronavirus samples by the CDC, and by a U.S. Army biodefense institute. But the more significant action is on Capitol Hill, where a House bill headed for floor debate would provide $1.75 billion for genomic sequencing.

"I don't think this is going to be a light switch. I think its going to be a dial," CDC head Dr. Rochelle Walensky told reporters, as she described the effort.

The U.S. now maps only the genetic makeup of a minuscule fraction of positive virus samples, a situation some experts liken to flying blind. It means the true domestic spread of problematic mutations first identified in the United Kingdom and South Africa remains a matter of guesswork.

Such ignorance could prove costly. One worry is that more transmissible forms of the virus such as the U.K. variant could move faster than the nation's ability to get the vaccine into Americans' arms.

"You've got a small number of academic and public health labs that have been basically doing the genomic surveillance," said David O'Connor, an AIDS researcher at the University of Wisconsin. "But there is no national coherence to the strategy."

The CDC is trying to shepherd those efforts and align them with the government's own expanded commitment. Officials said Wednesday that the administration will spend $200 million for the CDC to increase genomic sequencing to about 25,000 samples a week, or triple the current level.

On a parallel track, a U.S. Army biodefense institute will increase coronavirus gene mapping to 10,000 samples a week by the end of the month, up from about 4,000.

Genomic sequencing essentially involves mapping the DNA of an organism, the key to its unique features. It's done by high-tech machines that can cost from several hundred thousand dollars to $1 million or more. Technicians trained to run the machines and computing capacity to support the whole process add to costs.

In the case of the U.K. variant first detected in England, the changes in the virus allowed it to spread more easily and are believed to cause deadlier covid-19 disease. Walensky said the variant has already been identified in more than 40 states.

"Genomic sequencing testing is how we will spot variants early before they spread," Zients said.

Meanwhile, Biden is promising that a majority of elementary schools will be open five days a week by the end of his first 100 days in office, restating his goal after his administration came under fire when aides said schools would be considered open if they held in-person learning just one day a week.

Biden's comments, during a CNN town hall meeting in Milwaukee, marked his clearest statement yet on school reopenings. Biden had pledged in December to reopen "the majority of our schools" in his first 100 days but has since faced increasing questions about how he would define and achieve that goal, with school districts operating under a patchwork of different virtual and in-person learning arrangements nationwide.

"I said open a majority of schools in K-through-eighth grade, because they're the easiest to open, the most needed to be open in terms of the impact on children and families having to stay home," Biden said.

He said comments by White House press secretary Jen Psaki earlier this month that one day a week of in-person learning would meet his goal were "a mistake in the communication."

Asked when the nation would see kindergarten-through-eighth grades back to in-person learning five days a week, Biden said, "We'll be close to that at the end of the first 100 days." He said he expected many schools would push to stay open through the summer, but suggested reopening would take longer for high schools because of a higher risk of contagion among older students.

Separately, U.S. service members are refusing or putting off getting the covid-19 vaccine as frustrated commanders scramble to knock down internet rumors and find the right pitch that will persuade troops to get the shots.

Some Army units are seeing as few as one-third agree to the vaccine. Military leaders searching for answers believe they have identified one potential convincer: an imminent deployment. Navy sailors on ships heading out to sea last week, for example, were choosing to take the shot at rates exceeding 80% to 90%.

Air Force Maj. Gen. Jeff Taliaferro, vice director of operations for the Joint Staff, told Congress on Wednesday that "very early data" suggests that just up to two-thirds of the service members offered the vaccine have accepted.

That's higher than the rate for the general population, which a recent survey by the Kaiser Family Foundation put at roughly 50%. But the significant number of forces declining the vaccine is especially worrisome because troops often live, work and fight closely together in environments where social distancing and wearing masks, at times, are difficult.

The military's resistance also comes as troops are deploying to administer shots at vaccination centers around the country and as leaders look to American forces to set an example for the nation.

"We're still struggling with what is the messaging and how do we influence people to opt in for the vaccine," said Brig. Gen. Edward Bailey, the surgeon for Army Forces Command. He said in some units just 30% have agreed to take the vaccine, while others are between 50% and 70%. Forces Command oversees major Army units, encompassing about 750,000 Army, Reserve and National Guard soldiers at 15 bases.

At Fort Bragg, N.C., where several thousand troops are preparing for future deployments, the vaccine acceptance rate is about 60%, Bailey said. That's "not as high as we would hope for front-line personnel," he said.

Bailey has heard all of the excuses.

"I think the most amusing one I heard was, 'The Army always tells me what to do, they gave me a choice, so I said no,'" he said.

Service leaders have vigorously campaigned for the vaccine. They have held town hall meetings, written messages to the force, distributed scientific data, posted videos and even put out photos of leaders getting vaccinated.

For weeks, the Pentagon insisted that it did not know how many troops were declining the vaccine. On Wednesday, they provided few details on their early data.

Officials from individual military services, however, said in interviews that refusal rates vary widely, depending on a service member's age, unit, location, deployment status and other intangibles.

The variations make it harder for leaders to identify which arguments for the vaccine are most persuasive. The Food and Drug Administration has allowed emergency use of the vaccine, so it's voluntary. But Defense Department officials say they hope that soon may change.

"We cannot make it mandatory yet," Vice Adm. Andrew Lewis, commander of the Navy's 2nd Fleet, said last week. "I can tell you we're probably going to make it mandatory as soon as we can, just like we do with the flu vaccine." 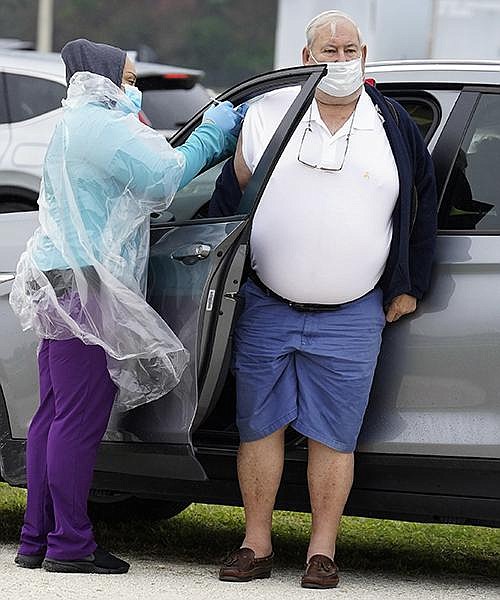 A man gets the coronavirus vaccine Wednesday at an outdoor site at Lakewood Ranch in Bradenton, Fla. (AP/Chris O’Meara) 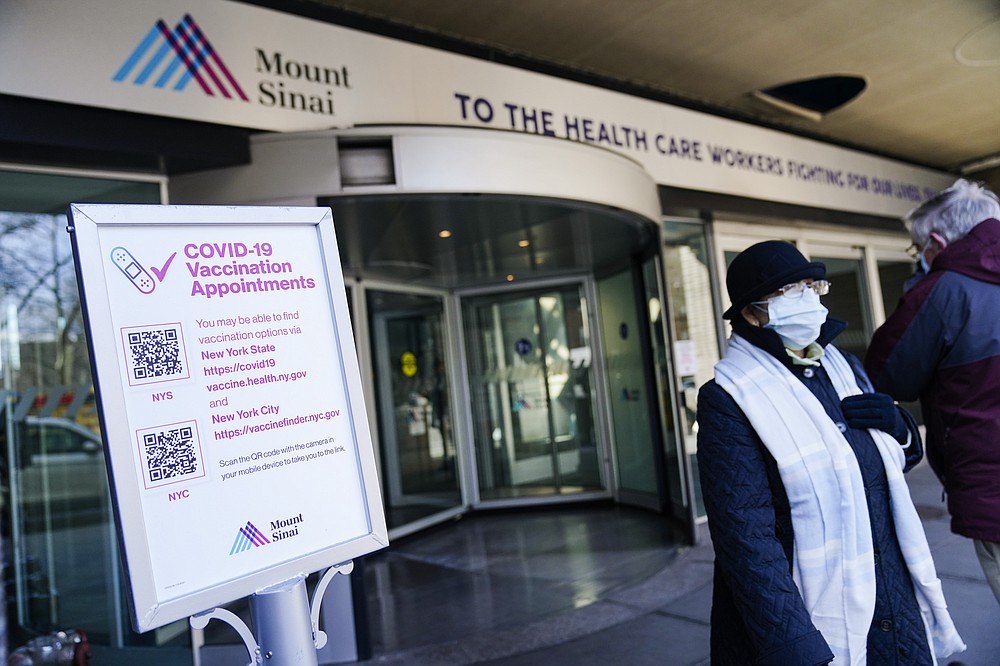 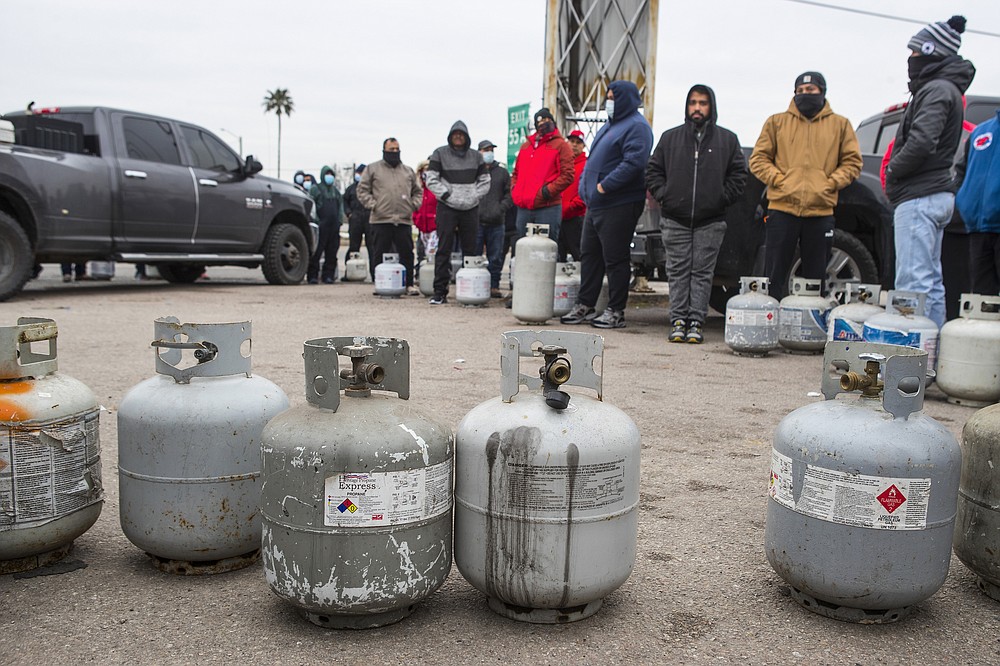 People line up to fill their empty propane tanks Tuesday, Feb. 16, 2021, in Houston. Temperatures stayed below freezing Tuesday, and many residents were without electricity. (Brett Coomer/Houston Chronicle via AP) 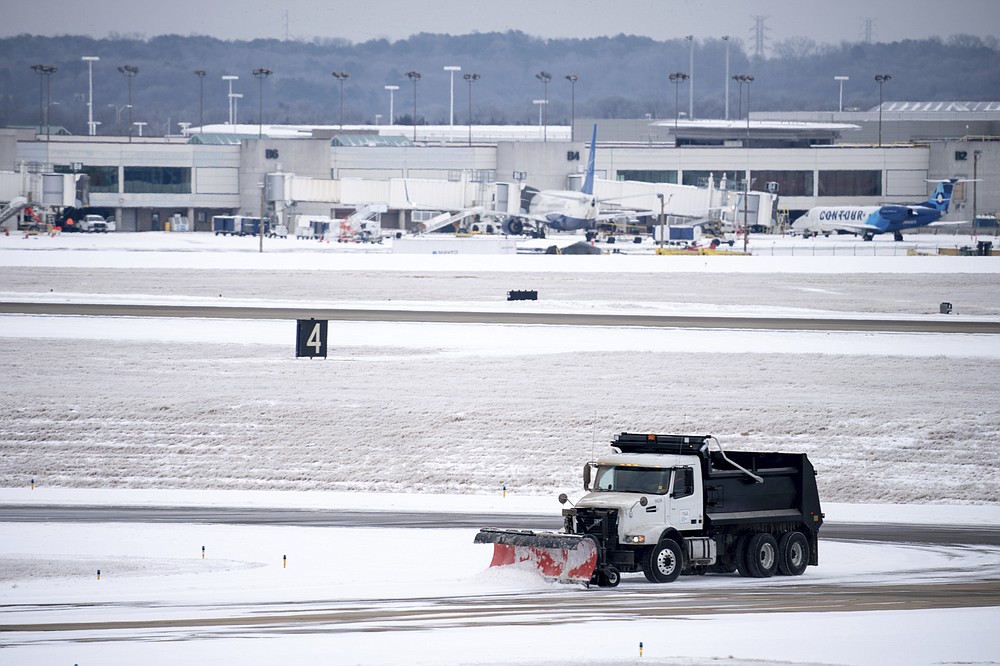 Snow is cleared from taxiways at Nashville International Airport in Nashville, Tenn., Tuesday, Feb. 16, 2021. Light snow continued to fall on Tuesday after a winter storm covered the Nashville area with freezing rain, sleet, and snow on Monday. (Andrew Nelles/The Tennessean via AP) 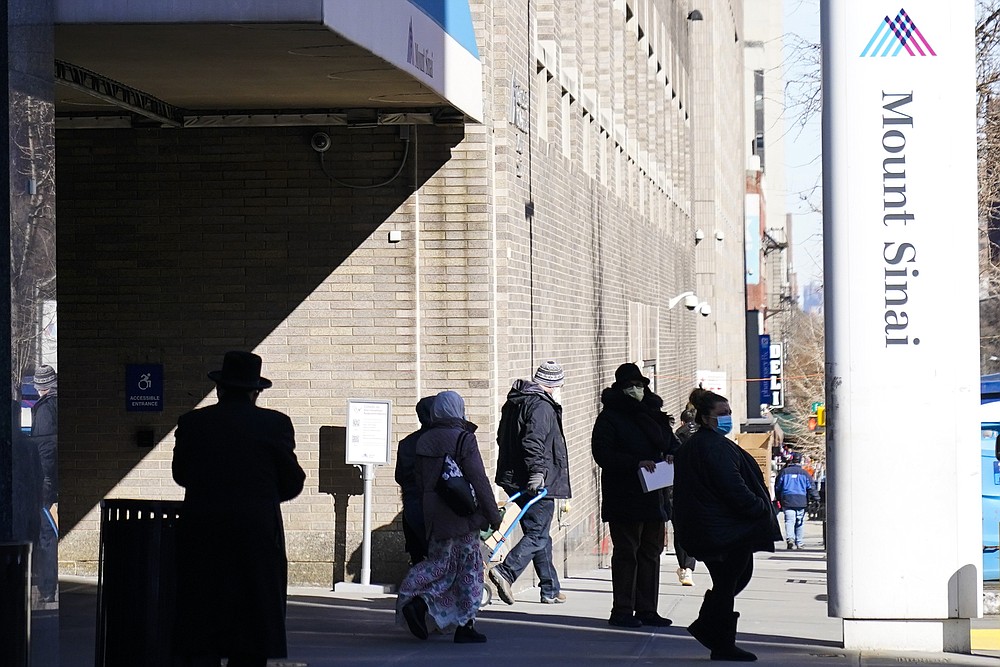 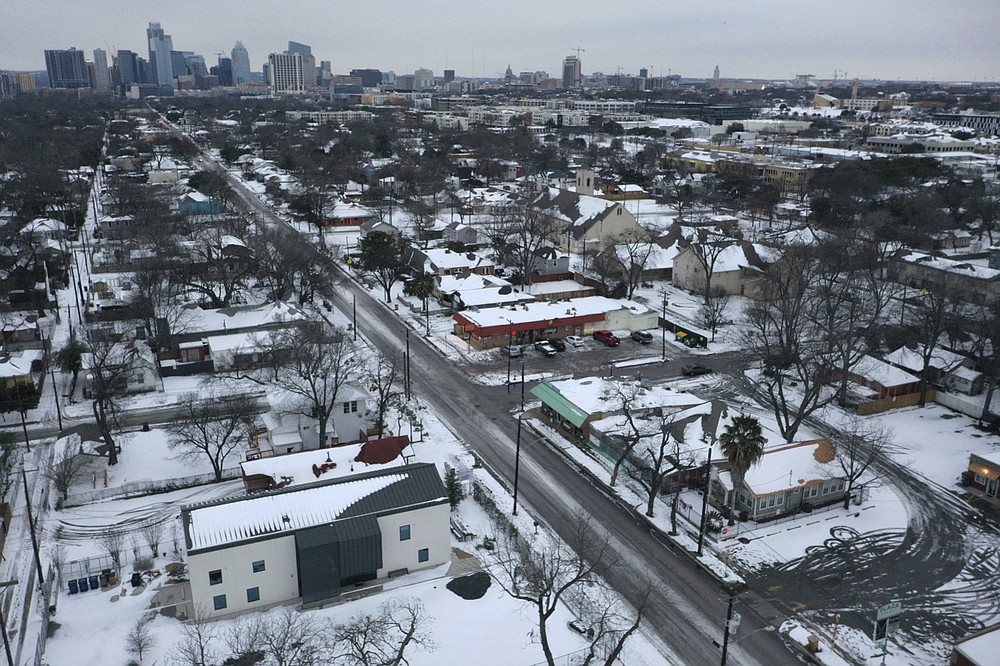 Snow and ice grips a neighborhood in East Austin on Tuesday, Feb. 16, 2021. Day six of the statewide freeze and still millions of Texans are without power. (Bronte Wittpenn /Austin American-Statesman via AP)
ADVERTISEMENT