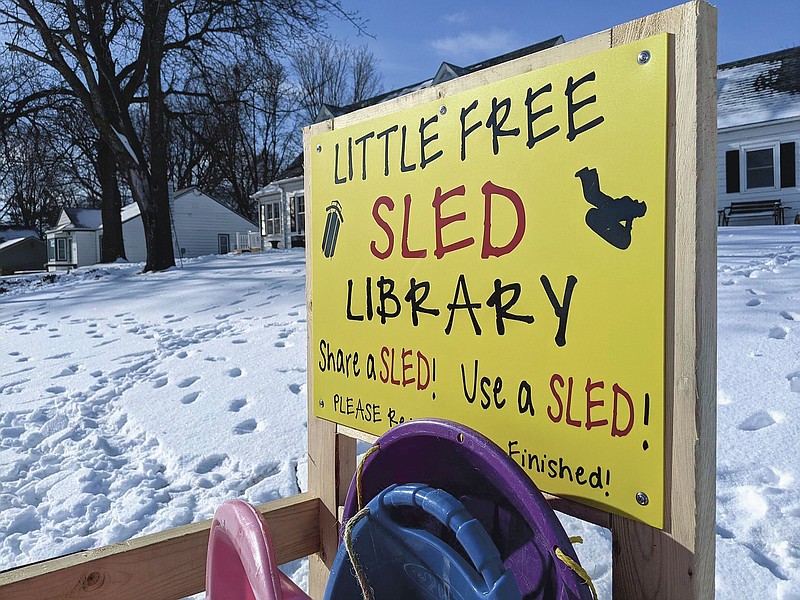 The park, which is home to Ventura's popular sled hill, was packed with dozens of children and adults on Friday, Saturday and Sunday.

"They have had the best of times," Prohaska said.

Her grandsons, Carter Prohaska, 11; Austin Cooper, 10; and Jace Prohaska, 9; of Kansas City, Mo., spent the weekend with her in Clear Lake.

One of the first things they did when they arrived was purchase three saucers from Kramer Ace Hardware before venturing to the sledding hill where they'd spend hours Saturday, Sunday and Monday.

On Saturday, two of their saucers broke, and on Sunday, the third did, but the fun didn't stop for Carolyn Prohaska's grandsons.

That's thanks to the Little Free Sled Library installed in Valerie Imhoff's yard at the corner of Clearview Drive and East Lake Street across from the sledding hill, also known as Grady's Hill and Granny's Hill.

"God bless the people who put this together," she said.

Jessica Wood, who resides in Clear Lake with her husband, Austin, and their children, Bauer and Charlie, came across the idea for the Little Free Sled Library a couple weeks ago on social media.

A friend of hers posted a picture of one in a Minnesota community, and Wood knew the Ventura sledding hill needed one, too.

Wood shared the photo she saw on Facebook to see if anyone could help her bring it to North Iowa.

"If anyone has a Boy Scout or someone that wants to build this, we have enough screws and lumber to donate," she posted.

One of those comments was from Tory Reiman, of Clear Lake, who volunteered to build it.

"These are pretty tough times for everybody and with the hill, I mean, my kids have used the hill and it's just the one hill we got and I think nowadays something like that would bring a smile not just to kids' faces but adults' faces," he said. "It's such a simple task to bring happiness."

Reiman, who has at least 10 years of experience in carpentry, reached out to his friend Bob Rolling, who owns Lake Time Brewery in Clear Lake, and the two built it together Thursday before the snowstorm, and subsequent snow day Friday.

"The time and effort was pretty minimal but what it brought was pretty cool," Rolling said.

Friday morning Reiman and Rolling picked up the sign for the library that Jeff Stealy had made, and they delivered it to Imhoff's yard near the sledding hill, where there were already families enjoying the fresh snow.

Wood, and her 5-year-old son, Bauer, were among them.

"It was really busy," she said.

Within hours of her sharing the news about the Little Free Sled Library on social media, 10 sleds of various shapes, sizes and colors had been donated to the library for others to use.

Imhoff, who's lived across from the hill for nearly 20 years, said her six children enjoyed sledding down the hill growing up, and she's watched countless others over the years.

This past weekend, the sledding hill was packed, she said, noting that she can see the hill from the comfort of her living room.

"It's nice to see them have so much fun," Imhoff said.

She said she was more than happy to have the Little Free Sled Library in her yard to accommodate the children, adults and families who want to spend time outdoors together during the winter.

The Little Free Sled Library will return to Imhoff's yard every winter as long as they're in the area, Wood said.

Her grandsons were scheduled to return home that afternoon but wanted to get in a few more hours on the hill before they left, and they pretty much had it to themselves as other children were in school on Martin Luther King Jr. Day.

The boys rotated between a variety of sleds from the library.

Carter Prohaska agreed, adding "The person who made (the library) is very generous of others." 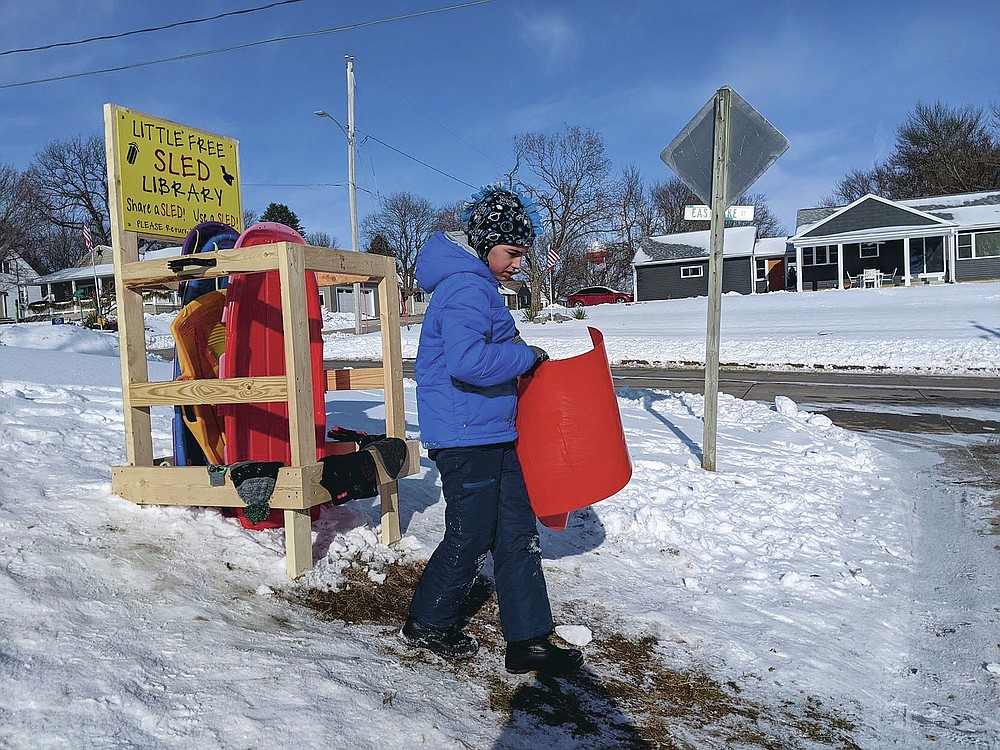 Austin Cooper, 10, of Kansas City, Mo., borrows a sled from the Little Free Sled Library at the corner of Clearview Drive and East Lake Street in Ventura, Iowa, Monday morning, Jan. 25, 2021. He and his brothers spent hours sledding at Lynne Lorenzen Park this weekend. (Ashley Stewart/Globe-Gazette via AP) 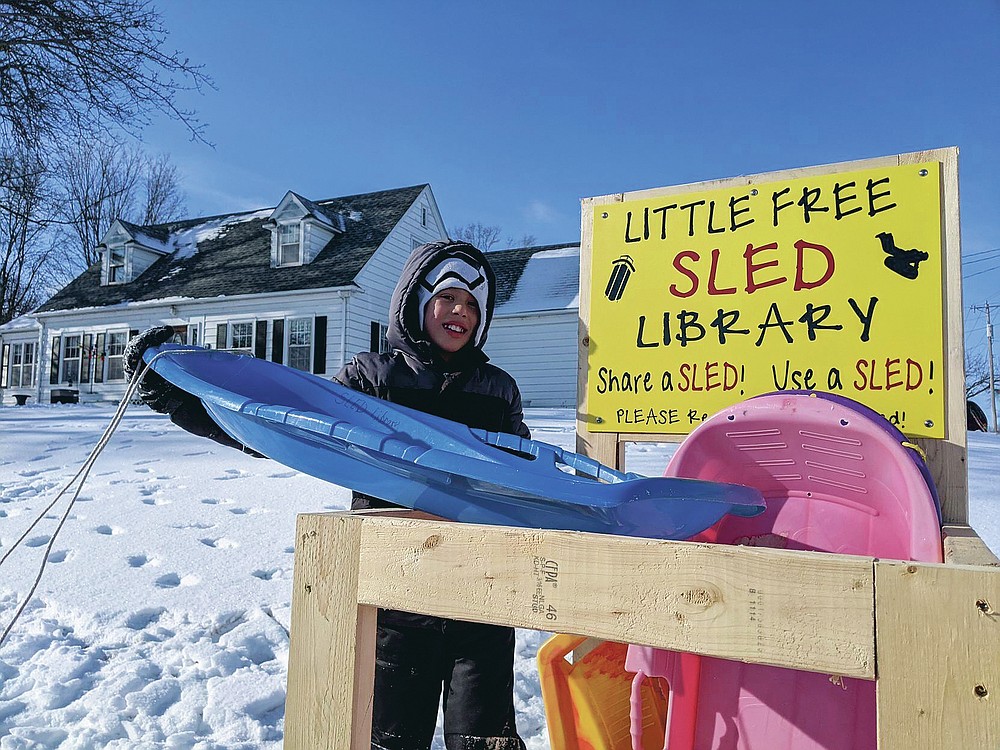 Jace Prohaska, 9, of Kansas City, Mo., borrows a sled from the Little Free Sled Library Monday morning, Jan. 25, 2021, in Ventura, Iowa. He and his brother spent hours at the sledding hill this past weekend. (Ashley Stewart/Globe-Gazette via AP)