'I Care a Lot' is deliciously evil 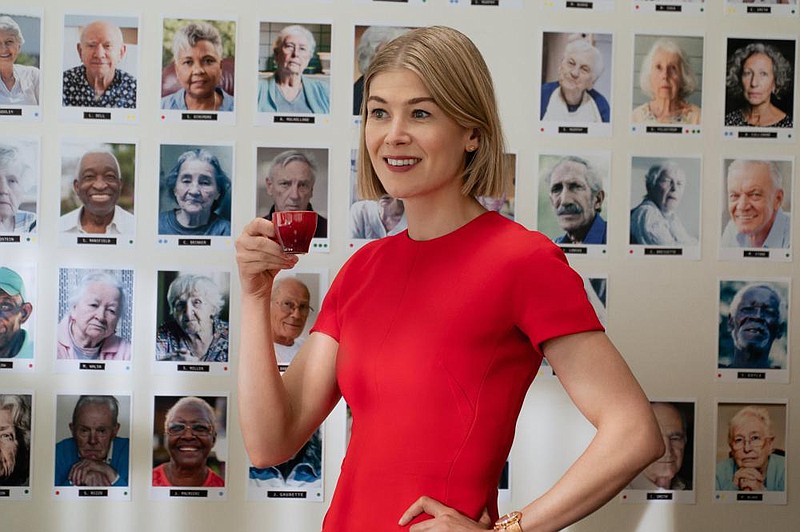 Marla Grayson (Rosamund Pike) is a very bad, absolutely awful person up to no good in the deliciously ßevil Netflix movie “I Care a Lot.”

A few weeks ago, when I wrote about "The Little Things," I told you I don't watch a lot of crime dramas. This week, Netflix gave me a review copy of "I Care a Lot" to review, and I can say I watch even fewer dark comedies. (Does "The Room" count?)

That's not to say I don't enjoy dark comedies, but I'm a pretty joyful person at heart, and too many of these films bum me out hard. A friend in Canada keeps trying to get me to watch "Throw Momma From the Train." If he lived here, or I lived there, I'd watch it with him. Movies are typically better with friends. Alone? I'm unlikely to add it to my queue.

"I Care a Lot" wastes zero time establishing how evil the main character is. Rosamund Pike is a brilliant actor. Right away, she's evil, what she does is evil, and for the next two hours you're going to watch things get worse and worse. But she'll do it with this unbreakable confidence and a terrifying lack of fear.

She plays Marla Grayson, a guardian for wealthy elderly individuals who lack the ability to fight her schemes and court orders. I watched her step by step as she found a target, convinced a doctor to sign some papers, got an emergency hearing from a family court judge, seized control of their money and property, and threw them into a retirement home under the guise of necessary care.

And she does it all with a smile on her face that's as cold as the snow and ice outside my apartment right now.

Things change, however, when she pulls this scam on a woman named Jennifer Peterson, played by Dianne Wiest, and discovers she's the mother of a ruthless gangster (Peter Dinklage). From there, the movie just escalates as Marla and this gangster play tug-of-war with an elderly lady, each with powerful egos that drive them to win at all costs.

I cannot emphasize enough how evil this movie is, and it's not heinous because people get their heads blown off or there's any on-screen torture like in the series that made Dinklage incredibly famous. The events in this movie are evil because they're legal. Marla's scam is legitimate. She has a court on her side, and she's clearly manipulating a system to her advantage that puts others in a detrimental position while she essentially robs them.

This movie gave me no hero to root for. But I had to keep watching to see who came out on top, Dinklage or Pike. If "I Care a Lot" didn't have those two in opposite roles, it wouldn't have been nearly as enjoyable. They are the best part of this movie, which elicits memories of 2005's "Thank You for Smoking."

There is no Aragorn, no Katniss, no Elsa to root for. All the main characters in this movie are monsters in their own right. But Marla and her opponent, Roman the gangster, are fantastic.

Nothing scares Marla, nothing. Not threats, not a near-death experience, not legal complexities. She cannot be broken, and Pike plays her so wonderfully. The only things she cares about are money and her lover, Fran, played by Eiza González.

On a side note, I'm torn here. I'm always happy to see a pair of women in love within cinema, particularly when their relationship and sexuality are not the primary focuses of the movie. And "I Care a Lot" did a phenomenal job of just treating Marla and Fran as any other lead couple in a film, matter of fact. Pike and González had great chemistry. I believed they cared about each other (and that's it). So good on writer and director J Blakeson for further normalizing a pair of queer women. Bravo.

But, they're so evil. I can't win. Whether it's "Happiest Season" where the queer couple was so ridiculously toxic I was actively rooting for them to break up, or here, where these characters have no redeeming qualities aside from their normalized sexuality, I wonder if I'm ever going to see a happy pair of saphic women in a movie that make me want to root for them.

But hell's bells, the massive lack of morals are so hard to ignore. I want more movies with this level of queer normalization, but I also want good characters I can cheer for. I know, I want it all. But that's the theme of this movie, having it all, fighting to get everything you want without one shred of care for the consequences.

Every actor in "I Care a Lot" is wonderful(ly evil). Dinklage masterfully raised tension in every scene he was in. There's a moment at the beginning where he's clearly upset over Jennifer's disappearance. And a quivering henchman standing before Dinklage has to wait to learn his fate while our gangster takes the time to take a bite out of his pastry. Dinklage just slides into his role so effortlessly. It was great to watch.

Heck, even Chris Messina shows up for a couple scenes as a bigshot lawyer, and he's so effortlessly charming switching from friendly to threatening to bribing. The film is very well cast.

And the soundtrack, holy moly! "I Care a Lot" is already a tense movie that had my hands clasped over my mouth and nose in disbelief. But the music really tightens the mood in every scene with plenty of driving techno tracks.

There's a hilarious cutaway scene that I think was only funny to me as a geek because these senior citizens are busy playing a fighting game in their assisted living facility. I didn't get a close enough look; it was probably "Tekken" or "Mortal Kombat," but I loved the idea that these retirees were duking it out in a brutal fighting game.

Perhaps the most terrifying part of this film is how real most of it seemed. I can believe there are bad guardians out there playing the system and bilking unsuspecting elders for all they're worth.

"I Care a Lot" has just two weaknesses, and the first is the least divisive. Dinklage can play smart characters. We saw it in the good seasons of "Game of Thrones" and in "X-Men: Days of Future Past." So it was a little disappointing when our gangster's plans slipped up a bit as the movie went on. He didn't become less diabolical, but the character did seem to grow a little less intelligent as the film went on.

Dinklage would choose not to kill someone or make sure another individual was actually dead. He wanted to take the time to set deaths up as suicides, when it probably would have been easier to just shoot his enemies and make the bodies disappear. But he didn't do that for some reason.

The second weakness is the ending itself. I won't spoil it, but the last event of the film didn't need to happen. They should have cut the story by about two minutes, and I would have liked that much better. That'll probably be controversial for those of you who watch this movie, though, because I bet more than a few folks will like the ending. I thought it was too much.

It felt like one final plot point hastily bent into place to make everything come full circle. It was unnecessary.

"I Care a Lot" is a deliciously evil film that grows more intense with every minute. It didn't give me anyone to root for, but I was hooked all the same, filled with a desire to keep going and see what happened to these malicious characters.

The film releases today on Netflix.