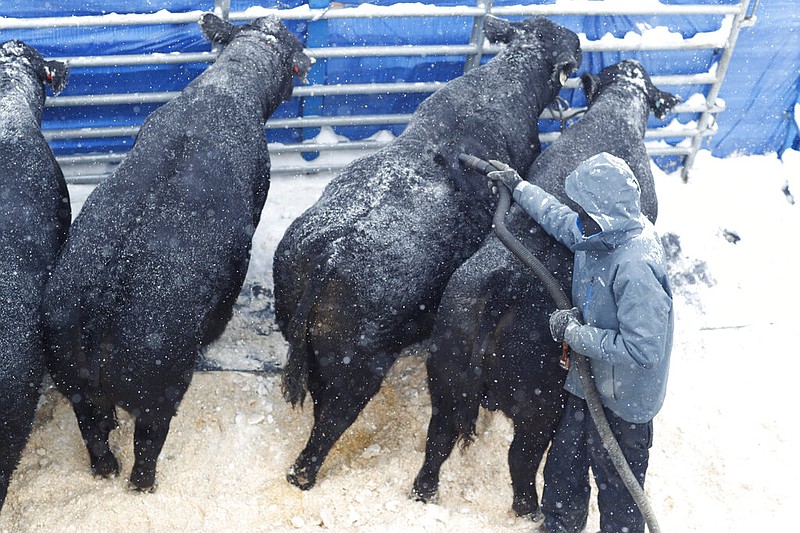 Bundled up against near-zero temperatures and a light snow, a worker tries to dry off cattle from the Bar Arrow Cattle Company of Phillipsburg, Kan., on display in the stockyard at the 111th annual National Western Stock Show and Rodeo in Denver in this Jan. 5, 2017, file photo.

The cows began birthing deep in the hollows as a winter storm moved into the state, bringing heavy snowfall and brutal cold with wind chills well below zero, which froze the water on the 2,600-acre farm near Hindsville.

By late evening Wednesday, Dotson and his brothers had counted at least a dozen dead calves at Dotson Land and Cattle Co. He estimates another dozen are buried somewhere in snow on the farm.

“I’m getting old and sentimental,” Dotson, 70, said. “I hate to see a baby calf dead. It is hard to go there and see they didn’t make it.”

The three brothers who started the farm in the 1970s are keeping track of the cows when they amble in for food. Dotson said they can tell if a cow birthed and can only assume the calf didn’t make it.

“If a baby can get up and nurse they can make it,” he said. “A lot of times they chill down before they can get up.”

He gives a 20% survival rate for any calf born in such harsh conditions. A few have been saved because the family was lucky enough to find the cows as they gave birth, he said.

Livestock farmers, including cattle, poultry and dairy farmers, are all working overtime in a business that already works overtime in hopes of keeping their animals alive, said Steve Eddington, spokesman for the Arkansas Farm Bureau.

“Everyone has a great impression of the farmer, and they have it because of the work ethic and commitment that they have to that lifestyle,” Eddington said. “It is times like this that is reinforced.”

Chicken farmers worked to keep houses warm and air circulating, while cattle farmers broke ice and fetched extra feed and hay, Eddington said. These are difficulties farmers face in other parts of the country, but it isn’t something Arkansas has seen on this scale before, he said.

“There has been loss of animals, structure damage to barns, and equipment is being challenged,” Eddington said.

Dan Wright, 60, has barely slept in recent days as he’s spent the nights trudging through the cold and inches of snow to check his chicken houses — his livelihood.

Sensors will tell him if the power system fails on his Waldron farm, yet the risk of losing any of his six houses is too great.

“This morning I had an alarm go off,” he said Tuesday. “My tractor wouldn’t start so I had to get my other pickup out. It is just double the work.”

Thousands of poultry farmers, the state’s top agricultural industry according to the Poultry Foundation, are making the same nightly trek, said John Anderson, University of Arkansas professor and head of agricultural economics and agribusiness.

“None of these poultry growers are sleeping good,” Anderson said. “I don’t care about how prepared they are. You worry about the water freezing, you worry about the roof caving in. The direct loss is bad enough, but the stress is pretty severe.”

Wright has been a poultry farmer for 31 years and says even if everything goes right, the financial loss from warming his houses will put a strain on his income. He said it costs about $1,000 to $1,500 to keep the houses warm every day at current temperatures.

“We have a thin profit margin as it is,” Wright said. “We will end up paying for this whole storm for the next nine months.”

Planned improvements to help efficiency on the farm could be put on hold, he said. It also could mean canceling a visit to see his children in Delaware.

Rising costs of fuel is compounding the burden, Wright said. He said a bump of about 50 cents in propane has increased costs by about $3,000 this year.

“At a dollar-sixty you are bumping your profit,” Wright said. “If you don’t make a profit, there are a lot of people who won’t stay in business.”

Agriculture is the leading industry in the state and adds about $16 billion to the state’s economy, the Arkansas Farm Bureau reports.

According to the Poultry Federation, there are more than 6,500 farms throughout the state. It says poultry in Arkansas provided $4.4 billion of the state’s agriculture cash receipts.

Anderson echoes Wright’s concerns about the cost of energy that farmers are facing.

“Sometimes integrators will provide some help to offset those costs but not always,” Anderson said. “The costs of getting through a spell like this just comes off the growers’ bottom line.”

A growing number of farmers in the state also are paying for their poultry houses through financing, he said.

According to a 2014 report by the U.S. Department of Agriculture, poultry farmers with fewer than six years of experience carried debt equal to 51% of assets, on average.

“By the time you pay for the facilities, you don’t expect to have a huge margin left over,” Anderson said.

Tyson Foods, the states largest integrator, did not respond to a question about possible weather-related support for its chicken suppliers.

The company and Simmons Foods said they canceled or reduced production at several affected places because of worker safety and animal-welfare concerns.

“We are monitoring conditions in real time and will resume normal schedules as quickly as possible when the situation improves,” said Julie Maus, a Simmons Foods spokesman.

Dotson said costs also were increasing for him on the cattle farm. He’s spending more than $1,000 a day trying to place extra feed for the 500 to 550 cows. He estimates the farm will spend an additional $10,000 this month to keep the cattle alive.

“We are trying our best to save every one that we can,” Dotson said. “That’s our money.”

The beef industry ranked fifth in Arkansas in 2012, according to the Farm Bureau. Cash receipts for cattle farming in the state topped $600 million in 2016.

Farmers will need to start planning now to make up the expenses at market, said James Mitchell, extension livestock economist for the University of Arkansas System’s Agriculture Division and an assistant professor of livestock marketing and management in UA’s Bumpers College.

“It has been a tough week for everybody,” Mitchell said. “This is definitely one of those storms we will be unfortunately talking about for a couple of years.’

The most immediate cost for cattle farmers is the increase of nutrients and higher feed quality needed for cows, Mitchell said.

He said that luckily calving season isn’t in full swing for most of the state, but in southeast Arkansas about 10% to 12% of calves will be born in February.

Farmers can receive some disaster assistance for the loss of calves through a Farm Service Agency program, part of the USDA.

“They are not going to cover 100% of the loss,” Mitchell said. “They will probably cover 75% of the market value of the animal.”

The snow is about 20 inches deep and temperatures at minus-6 have been hard on the cows, he said.

“We are a pasture-based dairy, which means they are all over the pasture,” Helms said. “We are battling this snow. It is almost belly deep on them.”

Dotson, Helms and other farmers have been breaking ice or carrying water in buckets to bulls and cows to keep a water supply available.

At least one cow at Dotson’s farm died when it ventured onto a frozen pond in search of water even with the family herding the livestock to streams and other sources, he said.

Helms has yet to lose a cow or calf. He said some of the cows are birthing, but he and his family have been able to herd them into warmer areas beforehand.

Milk production also has been less because of the cold, Helms said.

There are about 40 licensed dairy herds in Arkansas, according to the Farm Bureau. It says the farms generate approximately $18 million in milk sales annually.

Dustan Clark, an Agriculture Division veterinarian and poultry specialist, said farmers are proving how dedicated they are to their livestock.

“They have been out all night the last couple nights,” Clark said Wednesday. “One of the growers got up at midnight and hadn’t slept by 11 a.m. These growers are getting out in minus-degree weather.”

Agriculture is the leading industry in the state and adds about $16 billion to the state’s economy, the Arkansas Farm Bureau reports.