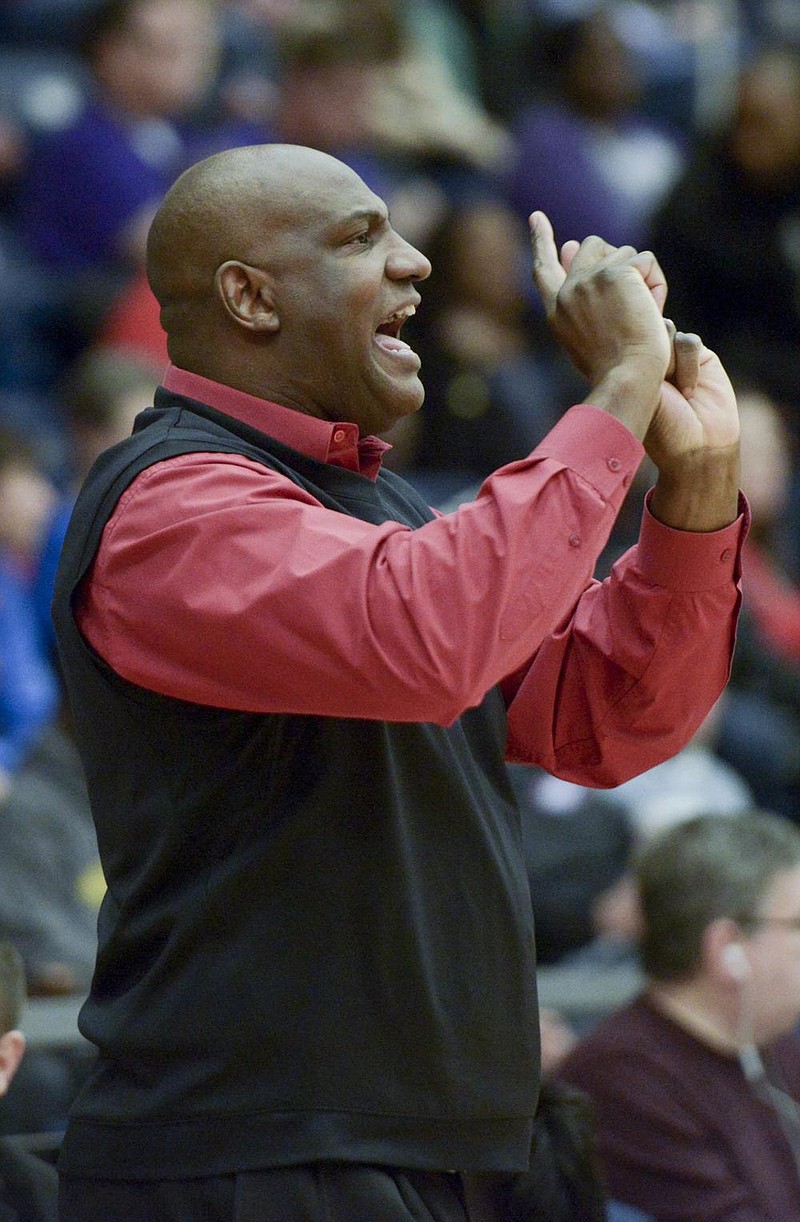 Fort Smith Northside Coach Eric Burnett said he knew the 6A-Central Conference Tournament wouldn’t be played and has had his team concentrating on the state tournament. (NWA Democrat-Gazette/Charlie Kaijo)

Nettleton Coach Jason Smith has never been shy about showing a little excitement along the sidelines. But this year has been a little different for him -- albeit in good way.

Despite not having anyone on their roster taller than 5-11 and no one in their starting lineup over 5-7, the Lady Raiders have found ways to win all year and will take a five-game winning streak into next week's 5A-East conference tournament opener against Marion.

"This year has been as much fun coaching as I've had in a long time," Smith said. "I mean, it's really been a blast. When we go out in pregame warm-ups, we look like a junior high team. We're just tiny, and every team we play has a 6-footer, or two or three. But we've played so many different defenses this year, and the kids have bought in.

"Working with them and seeing them have success. ... they're hungry for more. They're thinking the game more, and it's been really cool."

Nettleton (16-6, 7-4) lost last season's All-Arkansas Preps Player of the Year in Elauna Eaton to graduation, but the Lady Raiders are getting contributions from several, including leading scorers Briley Pena and Wakiryah Daniels, and playing stiff defense to help offset her loss.

The Lady Raiders are also 15-0 when holding opponents to 50 points or less.

"The kids have been great and have done everything we've asked them to do," Smith explained. "We're 16-6, but they've played their guts out every single time out. They bring it every game, win or lose. They go about their business, and it's just been so fun to coach and watch them do that."

The Lady Eagles (16-5, 13-1 3A-5) had just wrapped up an impressive stretch in conference play with a victory against Two Rivers on Feb. 9 before forecast about incoming weather began to surface.

When the Lady Eagles open the Region 3 tournament against DeWitt next week at Episcopal Collegiate, they will have gone 15 days without playing a game. That lengthy lay-off, particularly this late in the season, concerns Storms.

"It 100% does," he said. "That and not being able to practice for a week, it's definitely a concern of mine. But I think the girls are a little bit hungry just because of what happened last year."

Mayflower nearly reached the Class 3A title game last season but ended up losing to eventual co-champion Valley Springs 46-43 in the semifinals. This year, Storms said the Lady Eagles have been focused from the start at making another deep run in the postseason.

Mayflower returned four if its five starters and five of its top six players overall from last season. The team also received a boost when senior BreKayla Davis transferred in from Maumelle over the summer. The Lady Eagles did drop four of their first seven games, with three coming against Class 5A No. 4 Vilonia, Class 3A No. 2 Central Arkansas Christian and Class 4A power Pulaski Academy, but they've been on a tear since then.

"We've been playing some pretty good basketball," said Storms, whose Lady Eagles have won 11 games in a row. "Now, with the weather kind of slowing us down, the biggest thing will be our conditioning going into the regionals. We plan on getting back in the gym to practice as soon as these roads get clear.

"Hopefully we can get back to playing the way we were before all that weather hit."

A number of student-athletes from the state have a chance to be named McDonald's All-American by season's end after the organization released its nominees' list Thursday.

On the girls side, Fort Smith Northside's duo of guard Jersey Wolfenbarger and forward Tracey Bershers, who have committed to the University of Arkansas and Oklahoma State University respectively, were among the hopefuls. Bentonville center and Baylor University commit Maryam Dauda and Little Rock Central guard and Arkansas State University signee Lauryn Pendleton were also chosen.

Batesville guard and University of Missouri commit Izzy Higginbottom and Little Rock Christian forward and West Virginia University signee Wynter Rogers were two picks out of Class 5A while Shiloh Christian forward Anna McCredy, who's signed with Union University, was the lone representative from Class 4A.

In the boys division, Marion's JaMaury Mosley, Darrius Waterford and Tim McDonald Jr. were nominated, as was West Memphis guard Jordan Mitchell. All four play in the 5A-East. Lamar guard Ethan Kendall was recommended as well.

The phrase 'one and done' will get an uptick in usage next week for some Class 6A and Class 5A teams.

Some conferences in the state's two largest classifications have opted to hold league tournaments instead of using regular season seeding to determine their state tournament participants. That, in turn, could leave teams who have been among the state's best all year on the outside looking in when the playoffs begin during the first week of March.

Class 5A usually sends the top four teams from each of the four conferences to the state tournament based off their regular-season standings. But this year, covid-19 and weather caused some games to not be played, which paved the way for conference tournaments to be held if agreed upon by school officials.

That creates must-win scenarios for teams who otherwise would have been shoe-ins for the state playoffs. For example, Jonesboro, which won all 11 of the 5A-East games it played, must beat Paragould in the first round of next week's conference tournament in order to advance to the state tournament. The same can be said for others such as Batesville's girls in the 5A-East or Pine Bluff's boys in the 5A-South, both of whom were in first place in their respective conferences when play was stopped and are ranked among the top 5 in the Class 5A Super Six.

Urgency on the way

The 2020-21 season for Fort Smith Northside can be summed up in three words: Up and down.

The Grizzlies have won at least two consecutive games on three different occasions this year, but they've also lost back-to-back contests three separate times, too. Quarantine measures also have hurt any continuity and consistency Northside (10-11, 6-6 6A-Central) has tried to build during the season.

However, the postseason affords the Grizzlies a chance at vindication, and Coach Eric Burnett can't wait.

"I actually had a plan," he said. "I knew we weren't going to have a conference tournament, so I was going to spend all next week to get ready [for] state. One thing about us is that we need practice time because we haven't had everybody together. Those plans, of course, got messed up when the snow came in.

"So now, we've got to go on the fly. But we're excited about it. We've gotten better, it's just that we're still playing like we're unsure about ourselves at times."

Northside has shown that it can compete with the state's best this season, as evidenced by its 70-66 upset over No. 2 Little Rock Central on Feb. 5. One week later, though, the Grizzlies suffered an 18-point home loss to Conway, which had lost two games in a row coming it.

Burnett, though, said his team no longer has any room for error and mentioned he's has told them as much.

"I got in front of them a couple of Thursdays ago and kind of went through 2019 when we won it all," he explained. "I think we were the fourth or fifth seed going into the state tournament. I told them that if we can get it together when it starts, we'll be fine. But we've just got to get to that point where we're getting things together.

"We play good, then we don't play good. We have a good quarter, then we'll have a bad one. But I think the guys understand that now it's get it done or go home. I think it'll become a sense or urgency, and they'll play the way they're capable of playing. They have to, or the season is over."