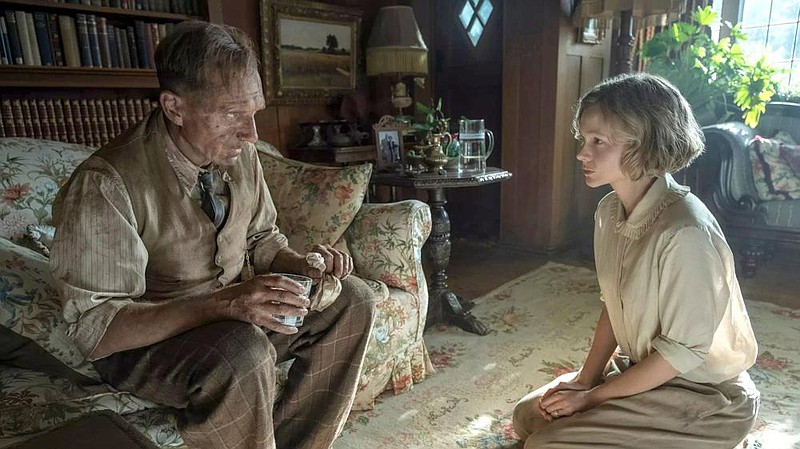 Amateur archaeologist Basil Brown (Ralph Fiennes) gives counsel to widow Edith Pretty (Carey Mulligan), who suspects that the mounds on her estate might be harboring something in the Netflix film “The Dig.”

While being "Based on a True Story" might help get a movie made, a more valid way of judging the end product is to ask, are the supporting characters interesting?

In the case of the new Netflix movie "The Dig," it's a given that Ralph Fiennes and Carey Mulligan will leave an impression, but what makes the script by Moira Buffini (based on a novel by John Preston) worth filming is that she didn't take it easy after developing their protagonists. People who walk into the film for only a few minutes have more back story and arcs than the principals in most other movies.

"The Dig" recounts how the 1938 Sutton Hoo excavation revealed how our understanding of the early Anglo-Saxons grew exponentially. We now know that before the 1066 Norman Invasion, the British people had money and a developed culture. The site even revealed some intriguing parallels to "Beowulf." (Maybe the Grendel wasn't a myth, after all.)

A ship carrying artifacts from the sixth or seventh century has been buried under a mound on the property of widow Edith Pretty (Mulligan) and her son Robert (Archie Barnes). Edith wonders if the large mounds on her land might be hiding something important and hires an experienced digger named Basil Brown (Fiennes) to investigate. Basil is up-to-task but comes with tentative recommendations.

Archaeologists look down on him because of his working-class background, and his brusque manner hasn't won him many friends. He doesn't argue with those he disagrees with; he just walks away. The role is particularly juicy for Fiennes because Basil does have a rich internal life, but he says very little about what bothers or pleases him.

Fiennes conveys Basil's frustrations and softer side without a lot of dialogue to let viewers know, that yes, he has feelings. That may be why Basil and young Robert hit it off rather easily and why Edith trusts his judgment about the dig.

Scholars in London are doubtful about the prospects, and Basil explains that robbers have frequently plundered much of the buried treasure in England. Even if you don't know much about life before William the Conqueror, it's safe to say there wouldn't be much of a movie if Edith's notions about the contents of the mound weren't correct.

Mulligan is about 20 years younger than the actual Edith Pretty was in the late 1930s, but she conveys a weariness caused by more than Edith's declining health. She remembers the previous world war and knows that there's little to stop another one. She might not live to see the contents of the site unearthed, her son become a man or keep her brother Rory (Johnny Flynn) from dying in the new conflict.

While some of the facts have been fudged (this is a movie, and a quick visit to a search engine can tell you what really happened), the era of the story helps give "The Dig" more urgency than simply determining if there is "gold in them thar hills." Putting the artifacts in London is dicey because of the Blitz, and the war is guaranteed to take workers off the project.

In addition to exposing class divisions, "The Dig" also explores how sexism might have been a factor during the project. Archaeologist Peggy Piggott (Lily James) has published some worthwhile studies, but the Crown's supervisor Charles Phillips (Ken Stott) spends more time listening to her new husband, Stuart (Ben Chaplin), and tells her that she was selected because her petite frame will help prevent her from crushing the contents of the site.

While the Piggotts' awkward marriage may not match the historical timeline, it's more engaging to watch James and Chaplin quietly stew than it is to watch other actors gush with affection and bicker loudly. Their screen time is limited, but they are integral to the tale, as is Basil's wife, May (Monica Dolan). She loves and supports him and seems oddly comfortable with his long absences. The two don't demonstrate much affection, but there is still a bond.

While it is rewarding to scour the web to learn why the Sutton Hoo discovery is historic, it's refreshing to find a drama where the living people are just as fascinating as the treasures in the dirt.