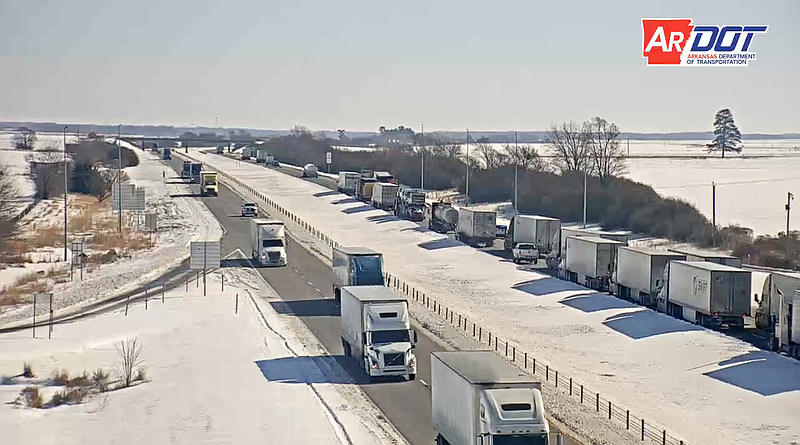 The scene of a tractor-trailer fire on Interstate 40 near Carlisle on Friday morning is shown in this screenshot of video provided by the Arkansas Department of Transportation.

Instacart, a service that offers same-day grocery delivery from stores including Kroger, Target, The Fresh Market, Family Dollar, Big Lots and others, is continuing service during the winter weather.

Shoppers are offered boosts on certain orders based on region and customer demand, a spokesperson for Instacart said.

As of Friday afternoon, the company was actively monitoring the effects of the winter storm and planned to notify customers and shoppers in case of adjustments to operations, the company said in a statement to the Arkansas Democrat-Gazette.

Public works crews with the City of Little Rock on Friday plowed and treated primary routes across the city that were affected by refreezing and slick conditions due to Thursday night's temperatures, according to city spokesperson Lamor Williams.

Crews will continue to work 12-hour shifts through the weekends, Williams said.

If crews are able to completely clear primary routes on Friday, the crews will be able to move to secondary and residential areas, he said. However, he added that if the primary routes refreeze on Saturday, crews will potentially need to clear them again.

For people in some areas who are unable to get groceries, delivery may be an option. Kroger is offering both delivery and pick-up at Arkansas stores, said spokesperson Teresa Dickerson.

Store hours have been adjusted based on product availability, Dickerson said.

Shoppers can check hours by logging onto Kroger.com. People who have logged in can view their nearest store's hours for delivery and pick-up.

In Lonoke County, all eastbound lanes were temporarily blocked Friday morning on Interstate 40 near the Carlisle exit as a result of a tractor-trailer fire, the state Transportation Department said.

The agency reported the crash in a Twitter post shortly after 9:10 a.m. The wreck initially left all eastbound lanes closed, but vehicles were moving slowly past the crash at 9:35 a.m.

No injuries were immediately reported, according to the Transportation Department