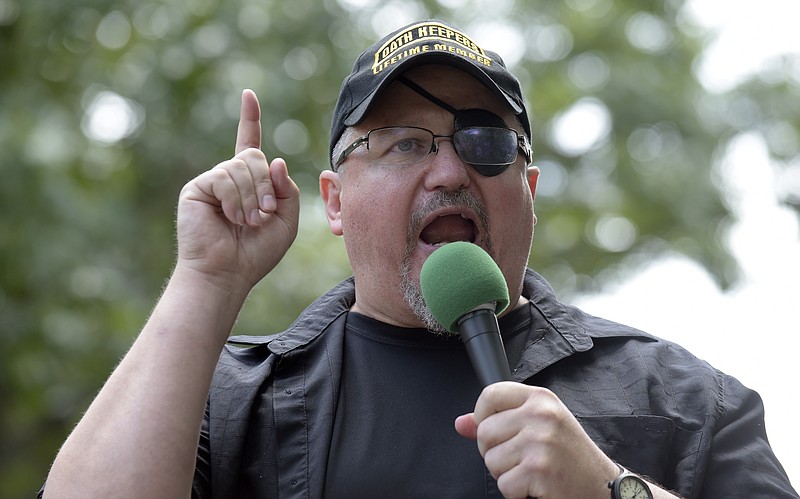 FILE - In this Sunday, June 25, 2017 file photo, Stewart Rhodes, founder of the citizen militia group known as the Oath Keepers speaks during a rally outside the White House in Washington. Rhodes, an Army veteran who founded the Oath Keepers in 2009 as a reaction to the presidency or Barack Obama, had been saying for weeks before the Jan. 6, 2021 Capitol riot that his group was preparing for a civil war and was "armed, prepared to go in if the president calls us up." (AP Photo/Susan Walsh, File)

WASHINGTON -- The Justice Department lodged charges Friday against six more suspected members of the Oath Keepers, adding new defendants to a case that had already accused others in the right-wing militia group of an organized plot to attack the Capitol on Jan. 6 and stop the final certification of the presidential election.

The charges, filed in U.S. District Court in Washington, accused Kelly Meggs, the self-described leader of the Oath Keepers' Florida chapter, and his wife, Connie, of joining four other militia members -- including a middle-aged couple from Ohio -- in a military-style "stack" that ascended a flight of stairs outside the Capitol and then broke into the building. The group of six, court papers say, worked with the three members of the Oath Keepers who were charged last month: Thomas Caldwell, Jessica Watkins and Donovan Crowl.

The new indictment against what is now a total of nine Oath Keepers represents the most significant effort by the government so far to prove that far-right extremists worked together in advance of Jan. 6 to prevent Congress from certifying President Joe Biden's victory and to help former President Donald Trump keep hold of power.

Indeed, prosecutors said, in late December, that Kelly Meggs wrote a message on Facebook echoing a tweet that Trump had posted, saying that a rally in Washington on Jan. 6 to protest the results of the election would be "wild."

The Oath Keepers, founded by former members of the military and law enforcement, have a long history of anti-government activity and have emerged as one of the most prominent extremist groups to have questioned the validity of the election and to have taken part in the storming of the Capitol.

Within a week of Election Day, for instance, the Oath Keepers' founder, Stewart Rhodes, told conspiracy theorist Alex Jones that he had men stationed outside Washington prepared to act at Trump's command. At a rally in the city Dec. 12, Rhodes called on Trump to invoke the Insurrection Act, suggesting that a failure to do so would result in a "much more bloody war."

Echoing earlier filings, the new indictment notes that on Jan. 4, Rhodes issued a call to action on his organization's website urging "all patriots" to "stand tall in support of President Trump's fight to defeat the enemies foreign and domestic who are attempting a coup."

In early December, court papers say, another person charged in the case, Graydon Young, 54, reached out to the Florida chapter of the Oath Keepers looking to become involved with the group while Crowl, a Navy veteran from Virginia, attended a training camp in North Carolina. By the end of the month, the militia members had set their eyes on Trump's Jan. 6 event in Washington and were arranging lodging in the city and coordinating with other groups of Oath Keepers traveling from North Carolina and Mississippi, prosecutors say.

On Christmas Day, court papers say, Kelly Meggs wrote a Facebook message noting that guns were not allowed in Washington and suggesting that he might instead bring "mace and gas masks, some batons" to the event. Days later, prosecutors say, he wrote online about a "QRF," or Quick Reaction Force, that could accompany the Oath Keepers to Washington. That echoed comments made by Caldwell who had also written messages about creating a team of armed militia members stationed outside Washington that could rush to the aid of those inside the city, prosecutors said.

On Jan. 4, court papers say, the suspects began making their way to Washington. Young traveled from North Carolina, staying at the Hilton Garden Inn with his sister, Laura Steele, another defendant in the case. Crowl, Watkins and the married couple, Bennie and Sandra Parker, all drove from Ohio.

Then, on Jan. 6, the conspirators donned military gear and stormed into the Capitol -- all except for Caldwell, prosecutors say, who remained outside on a balcony on the west side of the building with another Oath Keeper. The group pushed past at least one police officer, court papers say, and communicated with one another by text and Zello, describing the paint balls and tear gas being fired at them.

A few days after the riot, prosecutors say, Watkins sent a text to Parker saying she had been following the FBI's "wanted list" of suspects from the Capitol assault and did not think they had a reason to be concerned.

But within days, federal agents showed up at her home in Ohio with a search warrant. During the search, prosecutors said, the agents discovered several firearms, a paintball gun and a recipe for making "a destructive device."