'America is back,' president tells allies 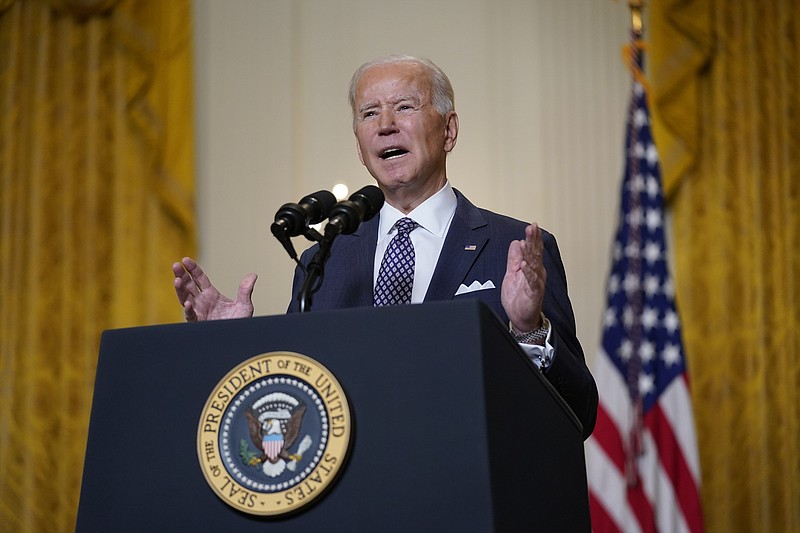 President Joe Biden speaks during a virtual event with the Munich Security Conference in the East Room of the White House, Friday, Feb. 19, 2021, in Washington. (AP Photo/Patrick Semansky)

WASHINGTON -- President Joe Biden used his first address before a global audience Friday to declare that "America is back, the trans-Atlantic alliance is back," after four years of a Trump administration that flouted the alliance's foreign policy through an "America First" lens.

Speaking virtually at the annual Munich Security Conference, Biden ticked through a daunting to-do list -- salvaging the Iran nuclear deal, meeting economic and security challenges posed by China and Russia, and repairing the damage caused by the coronavirus pandemic -- that he said would require close cooperation between the U.S. and its Western allies.

Without mentioning Donald Trump's name, Biden mixed talk of a reinvigorated democratic alliance with a rebuke of his predecessor's approach, a message warmly received by Western allies.

"I know the past few years have strained and tested the trans-Atlantic relationship," Biden said. "The United States is determined to reengage with Europe, to consult with you, to earn back our position of trusted leadership."

The president also participated Friday in a virtual meeting of the Group of Seven industrialized nations, where leaders managed to work Biden's campaign theme into their closing joint statement, vowing to "work together to beat covid-19 and build back better."

[Video not showing up above? Click here to watch » https://www.youtube.com/watch?v=lcEvW9Mh9-w]

Ahead of the meeting, a senior administration official said Biden would "make a strong and confident case that democracy is the model that can best meet the challenges of our time as long as we make the investment in our sources of strength and renew those sources of strength for the future."

Those pillars include investment at home, rebuilding alliances, reasserting U.S. participation in international organizations and a modernized military, the official said.

Over the past several years, China has cemented its place as a fierce economic competitor on the continent as the U.S. has reconsidered long-held national security and economic priorities embedded in the trans-Atlantic alliance. Populism has grown through much of Europe. And other Western countries have, at moments, sought to fill the vacuum left as America stepped back from the world stage.

German Chancellor Angela Merkel noted that some differences between the U.S. and Europe remain "complicated." Europe sees China's economic ambitions as less of an existential threat than the U.S. does, and has its own strategic and economic concerns that are not always in sync with Biden on Russia as well.

Still, Merkel, who had a strained relationship with Trump, didn't hide her preference for an American foreign policy informed by Biden's world view.

"Things are looking a great deal better for multilateralism this year than two years ago, and that has a lot to with Joe Biden having become the president of the United States of America," Merkel said. "His speech just now, but also his administration's first announcements, have convinced us that this is not just talk but action."

While in office, Trump refused to sign a joint statement after a tense G-7 meeting in Canada in 2018. The group papered over differences with a short statement at the meeting the following year, in France. The 2020 in-person gathering was canceled because of the pandemic. Trump had at one time planned to hold it at one of his Florida golf resorts.

Biden has not yet dismantled tariffs and other trade barriers with China and Europe that Trump imposed over objections from G-7 members.

He said the U.S. stands ready to rejoin talks about reentering the 2015 multilateral Iran nuclear deal abandoned by the Trump administration. The Biden administration announced Thursday its desire to reengage Iran, and it took action at the United Nations aimed at restoring policy to what it was before Trump withdrew from the deal in 2018.

Biden also spoke out about the two-decade war in Afghanistan, where he faces a May 1 deadline to remove the remaining 2,500 U.S. troops under a Trump administration peace agreement with the Taliban. He also called for cooperation in addressing economic and national security challenges posed by Russia and China, and identified cyberspace, artificial intelligence and biotechnology as areas of growing competition.

"We must prepare together for long-term strategic competition with China," Biden said.

His message was girded by an underlying argument that democracies -- not autocracies -- are models of governance that can best meet the challenges of the moment. The president urged fellow world leaders to show together that "democracies can still deliver."

At the G-7 session, administration officials said, Biden focused on what lies ahead for the international community as it tries to extinguish the public health and economic crises created by the coronavirus pandemic. He announced that the U.S. will soon begin releasing $4 billion for an international effort to bolster the purchase and distribution of vaccines to poor nations, a program that Trump refused to support.

Biden's turn on the world stage came as the U.S. officially rejoined the Paris climate agreement, the largest international effort to curb climate change. Trump announced in June 2017 that he was pulling the U.S. out of the landmark accord, arguing that the pact would undermine the American economy.

Biden also encouraged G-7 partners to make good on their pledges to Covax, an initiative by the World Health Organization to improve access to vaccines, even as he reopens the U.S. spigot.

The White House announced Thursday that it will commit $2 billion for Covax and will pledge another $2 billion over the next two years.

Trump had withdrawn the U.S. from the World Health Organization and refused to join more than 190 countries in the Covax program. The Republican former president accused WHO of covering up China's missteps in handling the virus at the start of the public health crisis that unraveled a strong U.S. economy.

French President Emmanuel Macron has called on the U.S. and European nations to allocate up to 5% of current vaccine supplies to developing countries -- the kind of diplomacy that China and Russia already are deploying.

Biden, who announced last week that the U.S. will have enough vaccine by the end of July to inoculate 300 million people, remains focused for now on making sure every American is vaccinated, administration officials say. Macron on Friday again pressed the U.S. and Europe to do more.

"It is up to Europeans and Americans to allow all the poor and emerging countries in the world to get access to vaccines as fast as possible," he said.

Information for this article was contributed by Aamer Madhani, Darlene Superville, Geir Moulson and Angela Charlton of The Associated Press; and by Anne Gearan of The Washington Post. 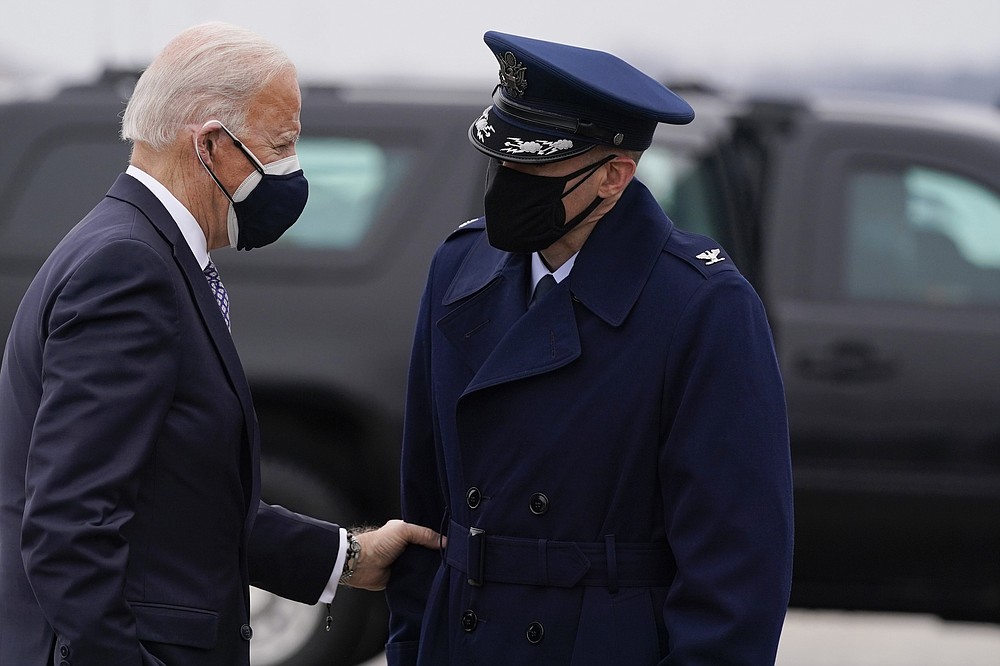 President Joe Biden speaks to someone as he arrives to board Air Force One for a trip to Kalamazoo, Mich., to visit a Pfizer plant, Friday, Feb. 19, 2021, in Andrews Air Force Base, Md. (AP Photo/Evan Vucci) 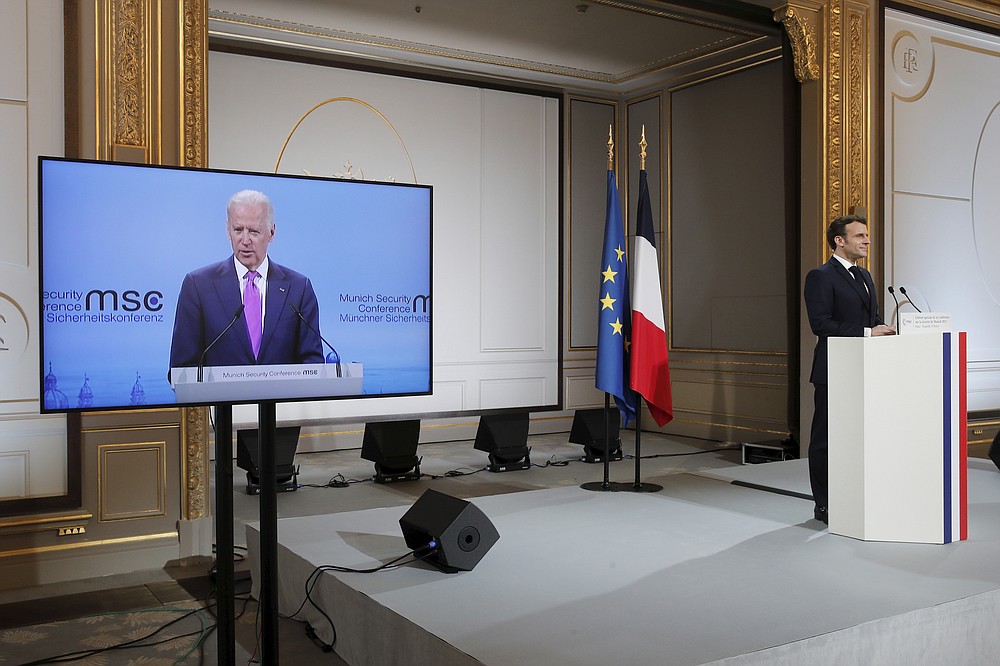 French President Emmanuel Macron, right, attends a video-conference meeting as U.S. President Joe Biden appear on a screen ahead of a 2021 Munich Security Conference at the Elysee palace in Paris, Friday Feb. 19, 2021. (Benoit Tessier/Pool via AP) 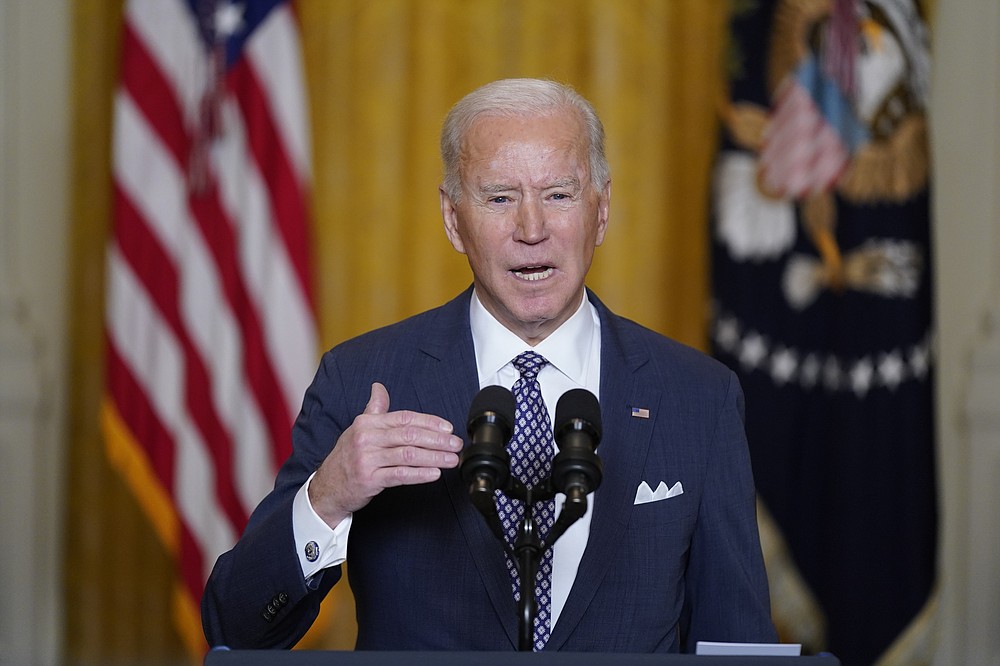 President Joe Biden speaks during a virtual event with the Munich Security Conference in the East Room of the White House, Friday, Feb. 19, 2021, in Washington. (AP Photo/Patrick Semansky) 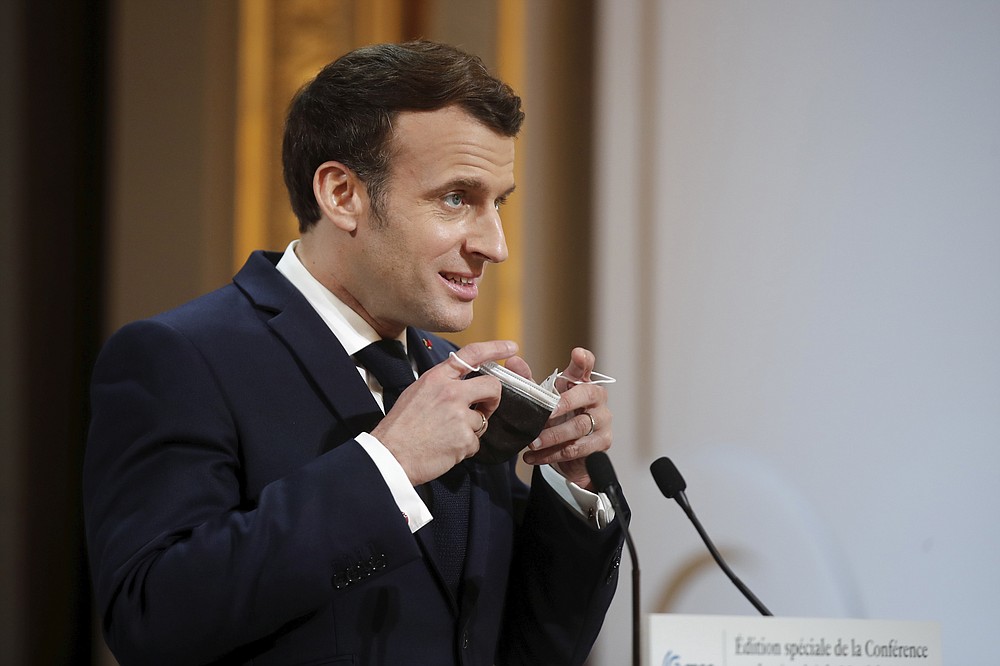 French President Emmanuel Macron removes his protective face mask as he attends a video-conference meeting ahead of 2021 Munich Security Conference at the Elysee palace in Paris, Friday Feb. 19, 2021. (Benoit Tessier/Pool via AP)
ADVERTISEMENT