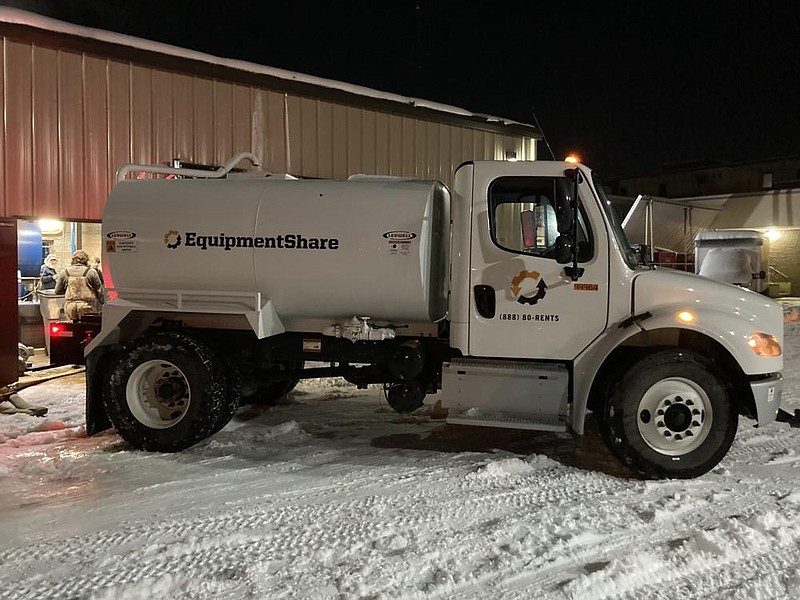 A water truck had to be brought in Thursday night to deliver water to Jefferson Regional’s boiler system because of the city’s water problems. Learn more about the water issues in a Q&A with Liberty Utilities on PB4. (Pine Bluff Commercial/Byron Tate)

Cold weather leading to leaks and burst pipes as well as an equipment breakdown at the water utility that serves Pine Bluff have led to low water pressure, warnings of a possible boil order and extraordinary steps taken by Jefferson Regional that involved a firetruck to keep the hospital's heat on.

Liberty Utilities posted an "Urgent Update" on its website Thursday afternoon saying that the utility was experiencing higher water demand because of possible breaks or leaks in the waterlines and because customers were leaving faucets running to avoid burst pipes.

Liberty asked customers to report any waterline breaks at homes or businesses, and warned that a worsening of the water pressure problem could result in more drastic measures.

The situation, however, worsened during the night when another problem developed, although the problem was not enough to trigger the boil order.

"Last night, we experienced an equipment issue at one of the three water production plants that serve Pine Bluff," the utility stated Friday in a news release. "This is unrelated to the earlier announcement regarding increased demand and the resulting decreased water pressure. However, this equipment issue is causing water pressure to drop even further. Crews immediately began repairs at the plant, worked through the night, and continue to work to fix the equipment. The cause of the equipment issue is not known at this time."

On Thursday evening, social media lit up with comments from residents -- some angry -- who claimed that the water company was about to shut off the water because a water main had burst and who said residents should fill their tubs and other containers with water. That advice, however, if followed, would have increased demand making matters worse.

To combat the misinformation, Mayor Shirley Washington posted on social media a "Public Advisory" saying that Liberty was not, in fact, going to turn off the water and that there had not been a water break.

At Jefferson Regional hospital, the situation became tense Thursday night. The hospital, like other big operations, heats its facility with a boiler that requires water to operate. Because there was very little water pressure on hand, hospital officials had to get help from the Watson Chapel Fire Department, which brought in a firetruck that was used to pump water into the boiler system. The firetruck was later replaced by a water truck that has made several trips to fill up with water and then pump it into the heating system.

A person working to get the water from the water truck into the boiler Thursday night said the consequences of not having enough water in the boiler were "humongous," adding that without water, there would be no heat. The temperature Thursday night fell into the low teens.

Wendy Talbot, chief experience officer with Jefferson Regional, confirmed that information Friday, adding that for the time being, the water situation is stable.

"The water thing is a big deal for us," she said. "Sufficient pressure of the water is necessary for a lot of things we do."

Talbot said surgeries had been canceled for the day and that Friday, being the day of the week when many patients are released, was busy as health workers helped patients get out to vehicles and safely home.

As for water to patients' rooms, Talbot said there was water service on the first floor and that she was not aware of any water pressure problems elsewhere in the building. She said the hospital had reached out to County Judge Gerald Robinson in case the hospital needed additional help.

Talbot said she hoped that, with the rising temperatures, conditions would improve with the water system, adding that hospital officials were proud of their employees.

"Our team pulled together," Talbot said. "Our facility crews have been here nonstop in order to keep everything going. First, there was covid, then 18 to 22 inches of snow and now this. It's never dull."

As for the firetruck, Talbot thanked the Fire Department for its help.

"Nothing was on fire," she said with a laugh. "They were just trying to assist us with our water issue."

At the University of Arkansas at Pine Bluff, classes were canceled Friday "due to reduced water pressure levels on campus," according to a memo from the administration to the campus community.

"Our Facilities Management team, the City of Pine Bluff, and our utilities company are working to resolve the problem in an expeditious manner," the memo said. "Thank you for your patience."

On Friday morning, Liberty issued another statement to customers, reiterating much of the information previously released.

"While water pressure has decreased, a water boil advisory is still not required at this time," the statement said. "We will update customers through local media, our website, and a customer email to customers who have email addresses on file should that change. We have received reports of some businesses and residents who are experiencing minimal water pressure. We would like to thank the Watson Chapel Fire Department for their assistance in helping improve water service conditions at Jefferson Regional Medical Center during the night. We would also like to thank the Pine Bluff Fire Department for their continued assistance as we work through this emergency."

The statement said the utility had not experienced a water main break as far as it knew.

"Our crews are patrolling the city actively looking for possible breaks," the statement said. "The prolonged bitter cold and increased demand continue to stress our system."

The utility went on to ask residents for help in identifying waterline leaks and breaks, and for help in conserving water.

"We also encourage our customers to conserve water where safely possible," according to the statement. "Please note -- customers concerned about their water pipes breaking or freezing should continue to protect their water pipes by leaving cabinet doors open to allow for additional heat and a small amount of water dripping from the faucets."

"We are grateful to our customers for their efforts to conserve water and report water leaks and breaks. The extreme weather conditions are challenging for all, but our crews won't stop until water service is returned to normal. We will continue to provide updates as they become available."