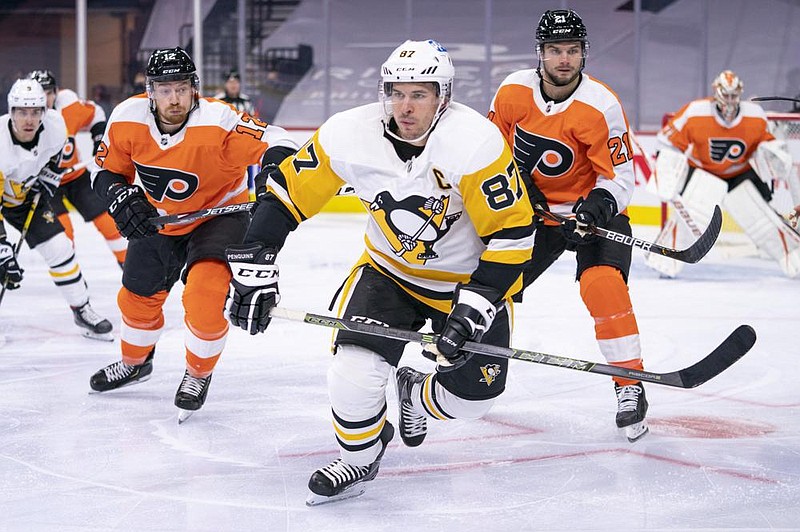 Sidney Crosby (middle) of the Pittsburgh Penguins chases the puck after winning a face off against the Philadelphia Flyers last month. A decade ago, Crosby’s career was at a crossroads because of an extended absence caused by a concussion. On the eve of his franchise-record 1,000th regular-season game, Crosby looks just as dangerous as ever. (AP/Chris Szagola)

Every drill in practice, no matter how routine. Every shift during a game, no matter what the score. The player who has helped define his team, his adopted city and his sport for a generation remains as committed to his craft as he was as a kid in Canada firing puck after puck into the dryer in his parent's basement in Cole Harbour, Nova Scotia.

Sullivan's spent the past five-plus years marveling from behind the bench, thankful that the player who gave him "nightmares" when Sullivan coached elsewhere is now sitting in front of him on the bench, setting a standard many emulate but few actually reach.

Crosby will cross another milestone tonight when he becomes the first Penguin to play in 1,000 regular-season games.

And at 33, Crosby isn't coasting. Fifteen games into his 16th season, Crosby remains a force at both ends of the ice. One shift he's redirecting a shot from teammate Kasperi Kapanen -- as he did to give the Penguins a lead they wouldn't relinquish on Thursday night against the New York Islanders -- the next he's backchecking like a rookie trying to earn a spot on the roster.

And that's where Sullivan believes Crosby separates himself from most of his contemporaries.

Not Crosby. Every summer is dedicated to working on some aspect of his game he feels is lacking. Every game is an opportunity to learn. Every moment in the locker room a chance to make newcomers feel comfortable amid a star-laden roster, mentor younger teammates or lead by example.

Pittsburgh has become one of the league's marquee organizations. One that's seen Crosby accept the Stanley Cup from NHL Commissioner Gary Bettman three times and one that helped steer Crosby through the darkest period of his career.

A decade ago, Crosby found himself at a crossroads when he absorbed a blindside hit from Washington's David Steckel during the Winter Classic at Heinz Field on New Year's Day 2011. The concussion and its lingering effects limited him to just 22 games over the next 18 months. For a stretch, every step forward was accompanied by a step backward. The idea of Crosby playing with regularity again -- let alone getting to 1,000 games -- seemed improbable at best.

Despite the constant setbacks, Crosby remained committed to both the short game and the long one.

"I think when you're kind of in that situation, you're trying to work at small steps and just get back out there and playing," he said. "But there's bigger goals that you have and it is obviously to play for a long time ... Trying to visualize that, it helps motivate you and remind you of what you're trying to do."

The collision with Steckel came in Crosby's 411th regular-season game. He's played 588 since, winning a scoring title, a goal title, an MVP and a pair of Cups along the way.

As unlikely as it seemed a decade ago that he'd get to 1,000, barring catastrophe he could play into his late 30s and maybe beyond. His current contract runs through 2025. He turns 38 that summer. 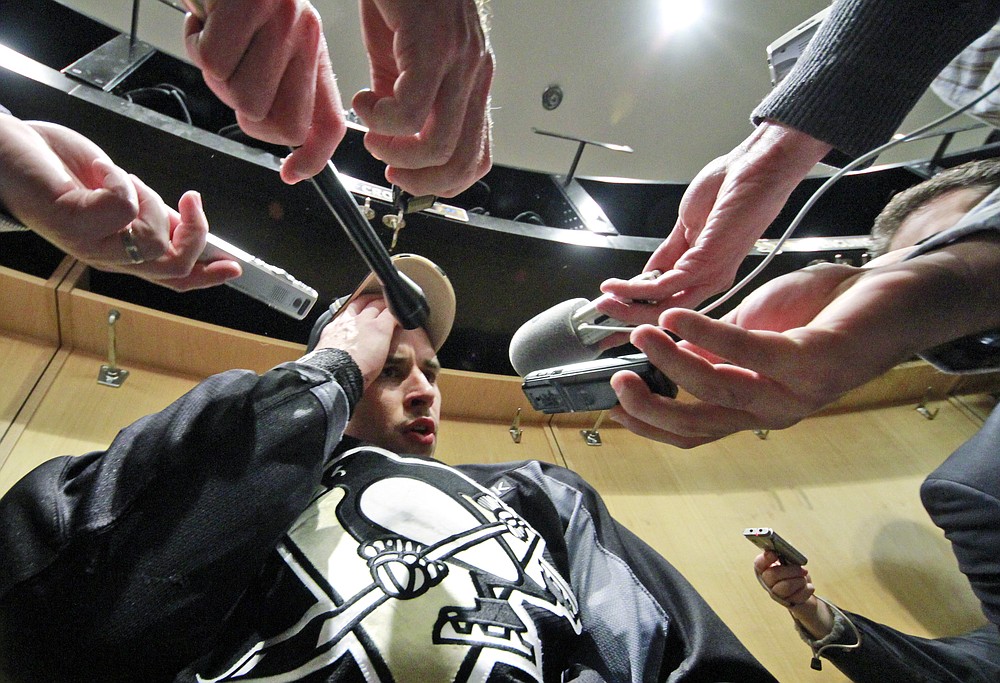 FILE - In this Nov. 21, 2011, file photo, Pittsburgh Penguins captain Sidney Crosby speaks to reporters after a game-day morning skate before his NHL hockey return against the New York Islanders in Pittsburgh. A decade ago, Sidney Crosby's career was at a crossroads thanks to what became an extended absence due to a concussion. (AP Photo/Gene J. Puskar, File) 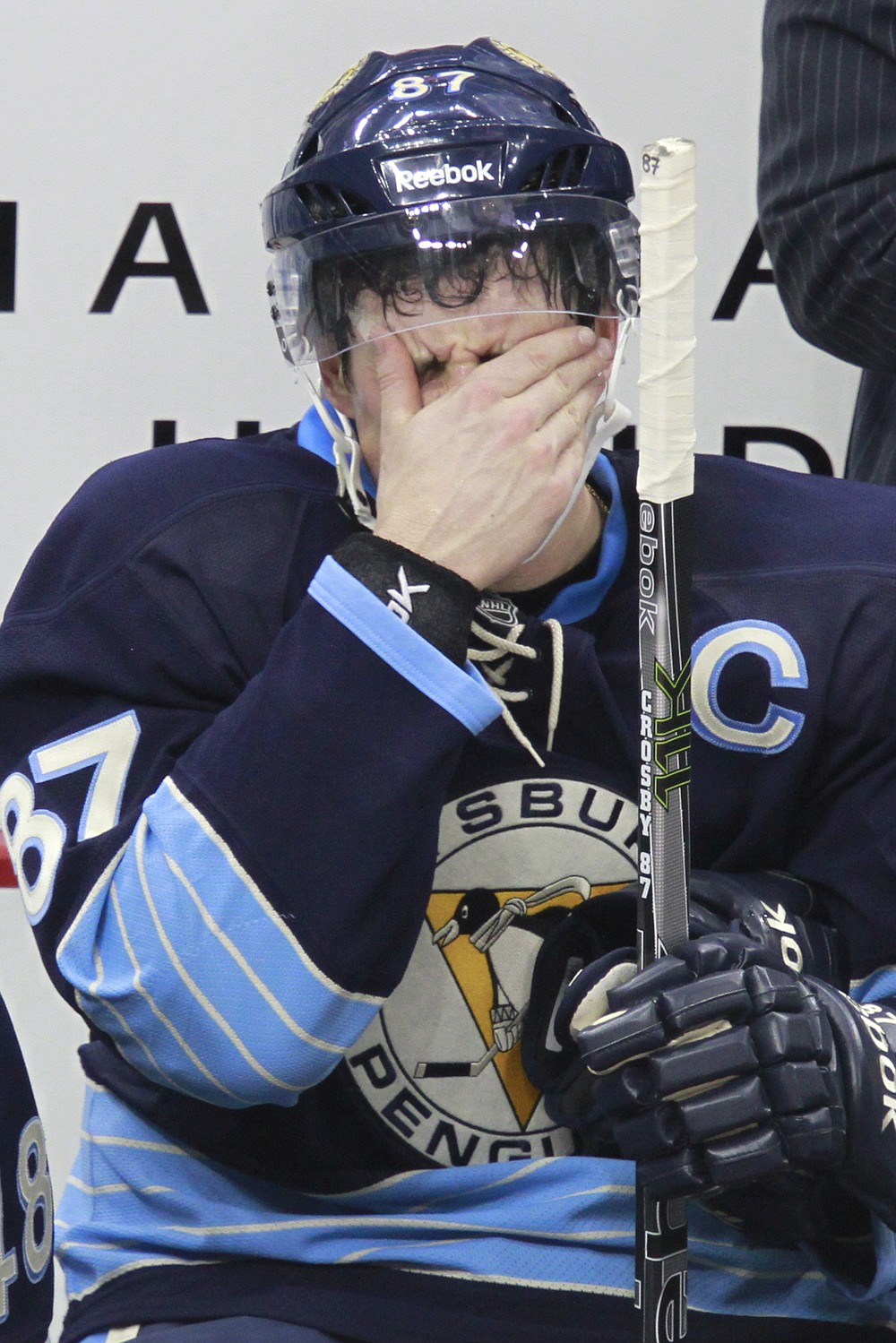 FILE - In this Nov. 25, 2011, file photo, Pittsburgh Penguins' Sidney Crosby sits on the bench during a time out in an NHL hockey game against the Ottawa Senators in Pittsburgh. A decade ago, Sidney Crosby's career was at a crossroads thanks to what became an extended absence due to a concussion. (AP Photo/Gene J. Puskar, File) 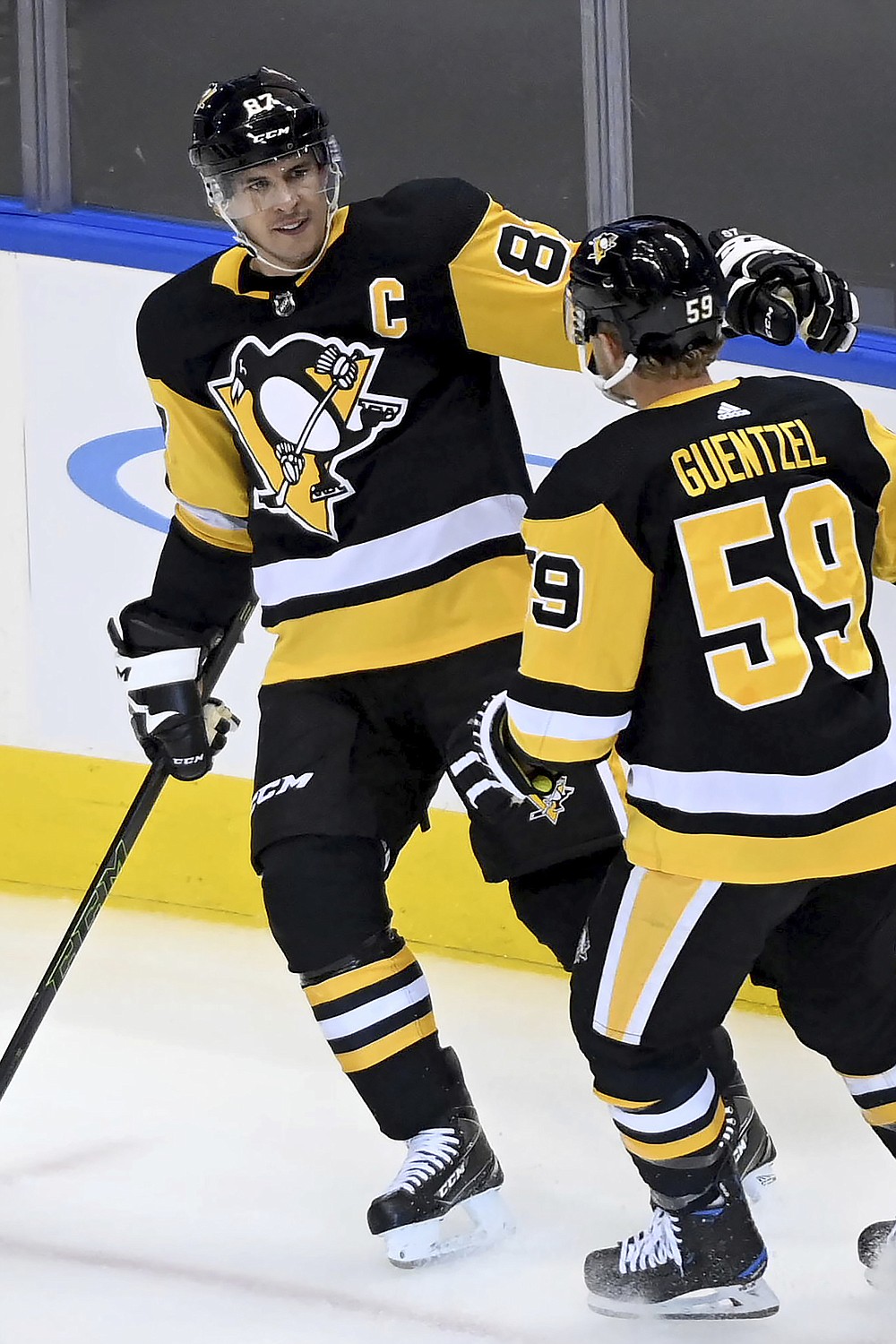 FILE - Pittsburgh Penguins center Sidney Crosby (87) celebrates his goal against the Montreal Canadiens with Jake Guentzel (59) during the first period of an NHL hockey playoff game in Toronto, in this Monday, Aug. 3, 2020, file photo. A decade ago, Sidney Crosby's career was at a crossroads thanks to what became an extended absence due to a concussion. On the eve of his franchise-record 1000th regular season game, the superstar looks just as dangerous as ever, with no end in sight. (Nathan Denette/The Canadian Press via AP, Fkile)
ADVERTISEMENT