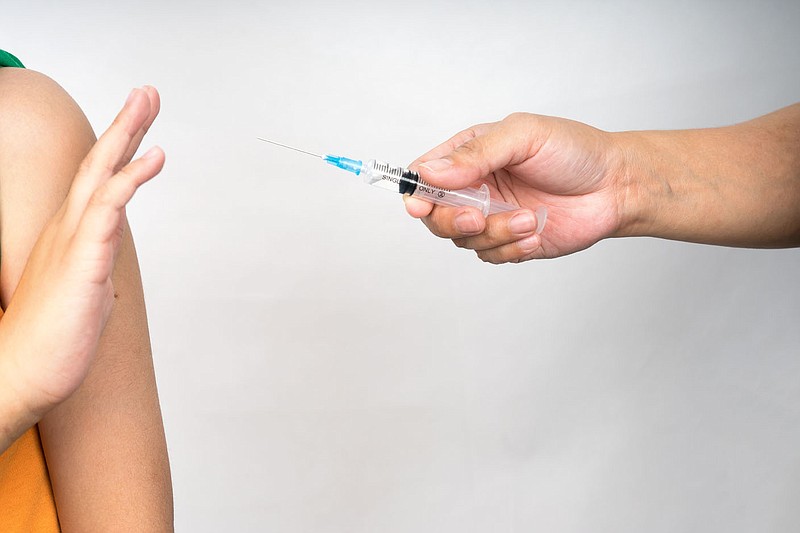 White evangelicals, along with Black Americans of different faiths, are some of the groups with the highest levels of vaccine skepticism in the United States. Just under a third of U.S. adults say they will probably or definitely not get the vaccine, compared to 44 percent of those who identify as white evangelicals, according to a January Washington Post-ABC News poll. (Courtesy Photo/Shutterstock)

In an insular world on the social media app TikTok, young Christians act out biblically inspired scenes in which they are forced to take a vaccine for the coronavirus, only to end up splattered in fake blood and on the brink of death.

The melodramatic videos are an attempt to represent how the introduction of coronavirus vaccines could herald the biblical End Time. Along with hundreds of thousands of other vaccine-questioning posts by social media users all over the world, they're demonstrating the ways in which health misinformation is targeting Christians, some reaching sizable audiences.

Some churches and Christian ministries with large online followings -- as well as Christian influencers on Facebook, Instagram, TikTok, Twitter and YouTube -- are making false claims that vaccines contain fetal tissue or microchips, or are construing associations between vaccine ingredients and the devil. Others talk about how coronavirus vaccines and masks contain or herald the "mark of the beast," a reference to an apocalyptic passage from the Book of Revelation that suggests that the Antichrist will test Christians by asking them to put a mark on their bodies.

The rapid spread of this material has triggered debate and concern among U.S. Christian leaders and experts who believe the religious movement against vaccines is growing, even as many leaders such as Pope Francis and Southern Baptist Convention policy leader Russell Moore are urging people to get shots. Both approved vaccines, Pfizer-BioNTech and Moderna, passed rigorous federal safety reviews and were shown to be more than 94 percent effective at preventing disease.

"In the summertime, I thought, these are just fringe beliefs. But the further we got into the pandemic, I realized, these are very widely held, and I was surprised by how many Christians and churches subscribe to this," said Emily Smith, an epidemiologist at Baylor University, a private Christian university in Waco, Texas. She runs a large Facebook page dedicated to discussing covid-19.

Smith, who is Christian and married to a Baptist pastor, said her posts trying to disavow anti-vaccine sentiment have been met with hostile responses and threats.

"It's one of the scariest and most disheartening parts of this, that so many people think that when you put on a mask, it is the mark of the beast or signals that you don't have faith or God isn't in control," she added.

The prevalence of these baseless or distorted claims is yet another example of the way technology companies have failed to control the spread of harmful and problematic material on their platforms. Social media companies have all banned misinformation about the coronavirus and the vaccine, citing the potential for such material to cause "imminent harm." But enforcement has been spotty.

Groups opposed to vaccines have long used social media to get out their message. But with the development of coronavirus vaccines and the pandemic shutdowns, the companies have enabled misinformation about vaccination and the virus itself to become much more widespread. Conspiracy theories about covid-19 that proliferated on social platforms were a major force behind people protesting shutdown measures and government restrictions over the last year, while a misleading documentary called "Plandemic" became a top trending video on YouTube.

Some creators said they were not entirely certain that the material they were sharing was accurate or certain to become reality, but that it was important to raise questions -- and to warn and potentially protect fellow citizens.

"If you believed without a shadow of a doubt that a bus was coming at you, would it not be evil of me to not tackle you and try to get you out of the way?," said Tyler Lackey, a 27-year-old Dallas-based Christian influencer and rapper who goes by the username BeyondHymn on TikTok and other platforms.

The Book of Revelation describes the End Time as a bloody battle filled with persecution, during which a beast forces "all people, great and small, rich and poor, free and slave, to receive a mark on their right hands or on their foreheads," according to the New International Version. "They could not buy or sell unless they had the mark, which is the name of the beast or the number of its name," 666.

A video by Lackey in July -- "Could vaccines be the mark of the beast?" -- speculated that mask mandates in stores and other rules might signal the mark because they were the first step in preventing people from being able to buy and sell, which Revelations suggests will be prohibited in the End Time. The video was viewed over 100,000 times.

Thousands of tweets related to the mark of the beast disappeared in January after Twitter conducted a large sweep of accounts connected to the QAnon movement -- a sprawling set of false claims that have coalesced into an extremist ideology that has radicalized its followers -- in the wake of the Capitol riots, according to Zignal Labs, an analytics firm that identified nearly 12,000 references to it across social media in December. That suggests a significant overlap between those sharing Christian-themed conspiracy theories and those sharing other conspiracy theories about the election and covid, according to Zignal.

"Linking misinformation to religion can be difficult to combat because a person may feel like they are being attacked for their religious beliefs," said Kolina Koltai, a vaccine misinformation researcher with the University of Washington's Center for an Informed Public.

The Washington Post's Michelle Boorstein contributed to this report.