Warm-up expected to melt snow, but flooding is seen as unlikely 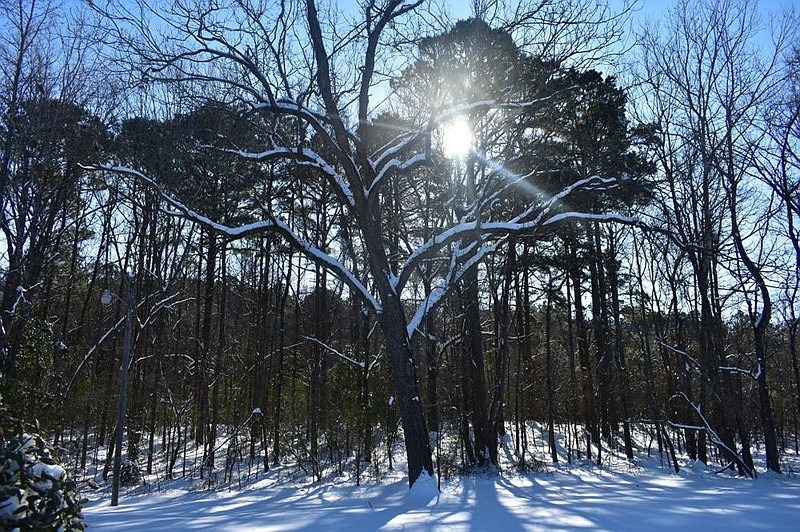 The sun peers through the trees Friday as at least a foot of snow remains on the ground north of Pine Bluff. Temperatures are expected to rise above freezing today for the first timesince Feb. 11, according to the forecast. (Pine Bluff Commercial/I.C. Murrell)

If any good news has come from this past week's winter storm, it's that it is over.

For the first time since Feb. 11, temperatures will rise above the freezing point in Pine Bluff. That's the forecast from such sources as the National Weather Service, which expects mostly sunny skies for the second straight day today and a high of 40 degrees.

But nine days have passed since the mercury went past the 32-degree mark.

"Once it starts to warm up, probably the big question is, will we have another big cold snap like that?" said Erik Green, a meteorologist with the National Weather Service's North Little Rock office. "The biggest reason we had this widespread outbreak was that we had this polar vortex. That's the real source of where the cold air comes from."

Heavy snowfall this week has left at least a foot in Pine Bluff and sent temperatures plunging to as low as zero. The unusually cold air has kept the snow from melting rapidly so far, but that's likely to change in the coming days.

Rain has entered the forecast with a 20% chance Sunday afternoon, followed by a slight chance of rain and snow during the evening, but the sun should continue to brighten skies Monday and Tuesday. Green said he does not think the added moisture will pose a flooding concern for Pine Bluff.

"With three to four days in advance of above-freezing temperatures, by the time the sun comes up or a few hours after, you're probably not going to see a whole lot of snow left in the ground in terms of potential flooding issues," Green said. "But if it's a tight, gradual melt with no rainfall that accompanies that melting process, flooding shouldn't be a problem. We may be looking at a very saturated ground."

The prospect of that -- and the snow itself -- are already taking their toll on the agriculture landscape. The University of Arkansas System's Agriculture Division on Friday reported that snow in Lincoln County crushed several poultry houses.

"Chicken houses have collapsed, hay reserves have gone down and the ability to get rolling blackouts and interruption of finding propane, that's playing on getting poultry operations going again," said Vic Ford, associate vice president for agriculture and natural resources extension with the Agriculture Division. "That's not even talking about the processing plants, whether it's the paper mill or poultry processing plant or anything having to do with getting people there. Getting people to work has been really difficult."

Most parts of Arkansas, including Jefferson County, are likely to see a rainfall amount of no more than "just over" an inch, Green predicts. That might alleviate fears of potential flooding, nearly two years after the Arkansas River overflowed and flooded communities, including Pine Bluff.

"There will be some increased soil moisture pockets across the state, but as far as rapid flash flooding -- or I guess in this case the concern would be all that runoff into the river basin -- some of the smaller streams and basins may struggle with it, but I'm not expecting anything to the magnitude of 2019 for now," Green said.

No more record-setting snowfall, however, is in the immediate future for Arkansas, Green added.

Ford isn't anticipating 2019-like flooding, either, but he is concerned about the excess water with which farmers will have to contend. He estimates an inch of rain amounts to 3 to 6 inches of snow.

The storm already has led to a decrease in the poultry supply and also has hurt the beef cattle sector, Ford said. Also, farmers are having to deal with the mental stress from financial worries, and damage to fruits and vegetables -- with the exception of peaches -- has already been done.