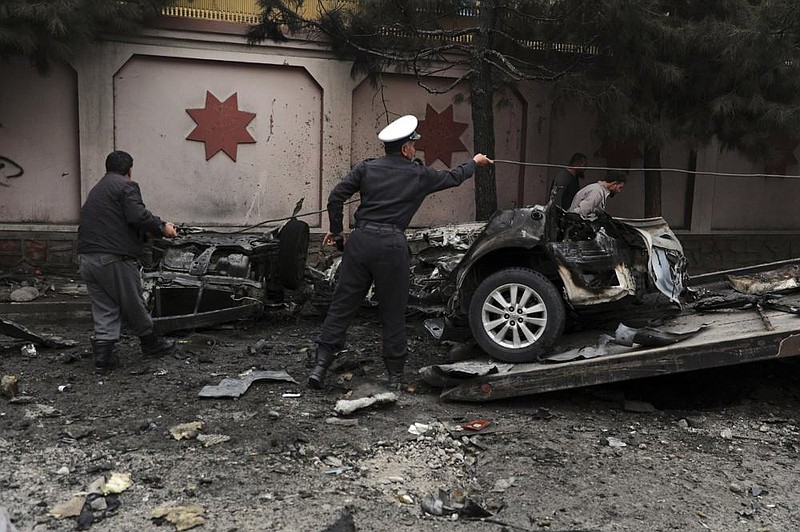 Afghan security personnel remove a damaged vehicle Saturday at the site of a bombing in Kabul. More photos at arkansason- line.com/221afghan/. (AP/Rahmat Gul)

KABUL, Afghanistan -- Three sticky-bomb attacks in the Afghan capital on Saturday killed at least five people and wounded two others, a police official said, amid a surge in violence in the war-torn country.

The majority of bomb attacks in the capital in recent months have been sticky bombs -- explosive devices with magnets that are attached to vehicles and detonated by remote control or timer.

The first blast targeted a civilian car, wounding both travelers inside the vehicle. The second explosion targeted a car in a northwestern Kabul neighborhood in which national army soldiers were traveling, killing two soldiers. A civilian passerby was also killed.

Afghanistan has seen a nationwide spike in bombings, targeted killings and violence on the battlefield as peace negotiations in Qatar between the Taliban and the Afghan government have stalled.

BAGHDAD -- At least four rockets struck an Iraqi air base Saturday night, the military said in a statement. Other officials said one person was wounded at the base, where an American defense company services combat aircraft.

Four security officials said the individual wounded at Balad air base in Salahaddin province worked for the company, and one of them said his nationality was South African. The officials spoke on condition of anonymity in line with regulations.

They said U.S. defense company Sallyport has its headquarters within the air base and currently has 46 personnel there, contracted to provide base services to support Iraq's F-16 program.

The attack came days after more than a dozen rockets targeted coalition forces outside Irbil international airport in the Kurdish-controlled region of northern Iraq. The attack killed one coalition contractor and wounded nine more. Some Iraqi and Kurdish residents were severely injured.

PARIS -- Dozens of people rallied Saturday in Paris to support the anti-migrant group Generation Identity, which is fighting for survival after a government order to dissolve it.

An Associated Press reporter saw about 200 protesters at the demonstration, which was largely peaceful. Participants held flags of the movement and signs reading "Stop dissolution." A counterdemonstration took place in southern Paris against the controversial group.

Generation Identity has influence throughout France and beyond. It contends its members are whistleblowers on a mission to preserve French and European civilization, seen as undermined by newcomers, notably Muslims. Critics contend it is a militia espousing a racist cause.

The Lyon-based group was the backbone of a 2017 "Defend Europe" mission on the Mediterranean Sea that used a chartered anti-migrant ship crewed by European citizens.

Generation Identity has scraped through several legal battles, but at the moment it is up against French Interior Minister Gerald Darmanin, who wants to disband the group.

The coast guard said in a statement that migrants were being transferred to the Italian vessels when the boat overturned some 15 miles south of Lampedusa Island.

After tossing life vests into the water, coast guard and police officers helped the struggling travelers aboard.

A coast guard helicopter based in Sicily and coast guard and border police motorboats searched the area in case anyone was missing.

Italian state radio said five people were possibly missing but that there was no official confirmation.

Human traffickers based in Libya and Tunisia launch crowded, unseaworthy rubber dinghies and aging fishing boats toward European shores. The migrants, arriving from Africa, the Middle East and Asia, are hoping to find family members or jobs in Europe.

Over the past several years, hundreds of thousands of migrants have reached Italy either on their own or after being rescued at sea.