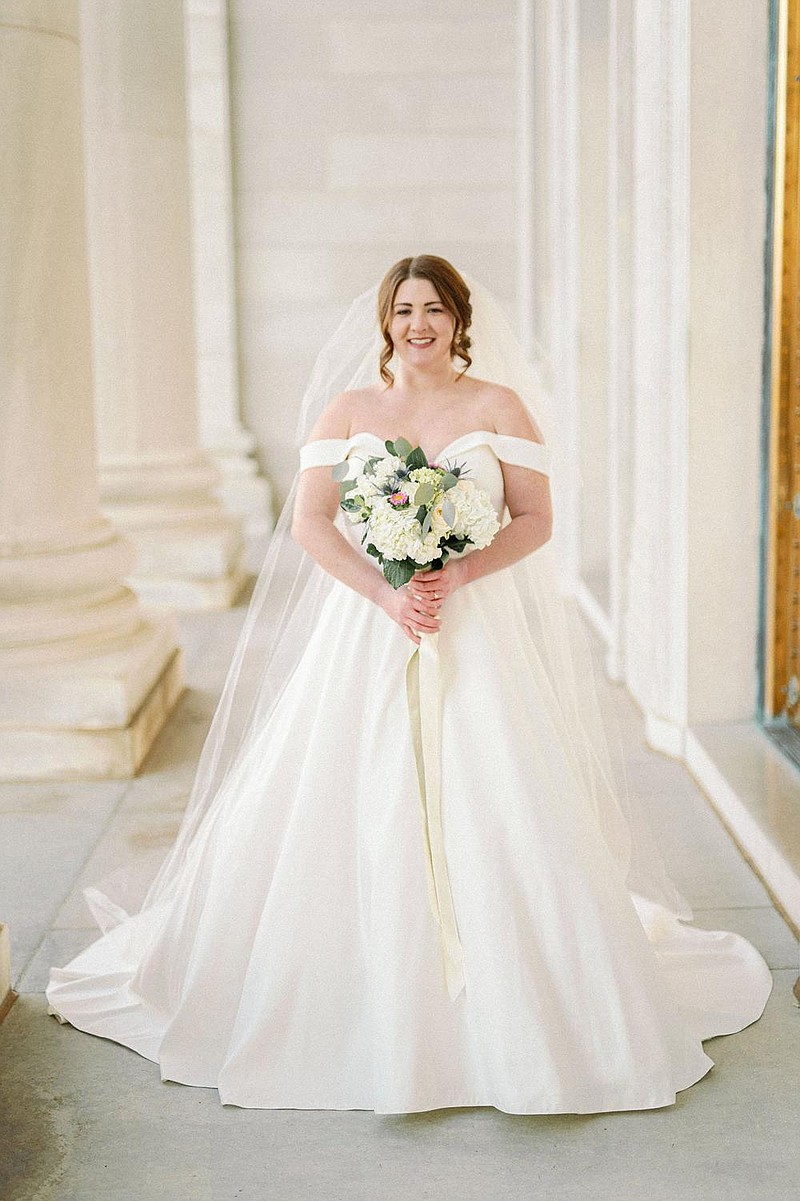 Gigi and Dan Parker of Little Rock are the parents of the bride. She is the granddaughter of Christine and the late Dr. Orlie Parker and the late Sue and Glen Chambers, all of North Little Rock.

Parents of the groom are Lori and Jeff Ferguson of Olive Branch. His grandparents are the late Patricia and John Seiler of Bronson, Mich., and the late Louis and Johnnie Ferguson of Mercer, Tenn.

Lanterns provided lighting for the deck where the ceremony took place. An arch and flower boxes made by the bride's father were decorated with arrangements of roses, hydrangea, lily, eucalyptus, ivy and curly willow. Wedding wreaths decorated the gate and front doors. Colors were emerald green, cream, silver and gold with muted colors of ribbons.

Given in marriage by her father, the bride wore a ballgown of ivory peau de soie satin. The fitted bodice had an off-the-shoulder sweetheart neckline and the sleeves were made with a folded band of satin. The chapel-length skirt extended from the waist embellished with a hand-beaded crystal sash. She wore her sister's floor-length wedding veil of white tulle. Her bouquet was filled with white roses, hydrangeas, dahlias and tulips.

The bride's honor attendants were Emily Parker Raine of Little Rock and Katelyn Parker Erickson of Bella Vista, sisters of the bride. Bridesmaids were Molly Rositano of McKinney, Texas, and Alicia Armes and Sarah VanSteinberg, both of Memphis. They wore emerald-green gowns with pleated bodices and column skirts. They carried bouquets of roses, hydrangea and tulips.

Flower girl was Emma Gayle Erickson of Bella Vista, niece of the bride, and ring bearer was Isaiah McCollough.

Best man was Jake Pritchard of Memphis. Groomsmen were Jared Ufferman, also of Memphis; Stuart Columbia of Olive Branch; and Nathan Martin of Hernando, Miss. Guests were seated by Lee Parker of Fayetteville, brother of the bride.

A reception, also at the home, followed the ceremony. Tables, covered in white cloths, held vases of wedding flowers and tea lights. Assisting were Mackenzie Johnson and Lee Parker.

The bride has a bachelor's degree in hospitality innovation from the University of Arkansas, Fayetteville, where she was a member of Zeta Tau Alpha. She is an IT administrator at Crye-Leike Realtor corporate headquarters in Memphis.

The groom has an associate degree in music education from Northwest Community College in Senatobia, Miss., and a bachelor's degree in audio engineering from Delta State University in Cleveland, Miss. He is a desktop support technician with Crye-Leike Realtor corporate headquarters.

The couple will live in Olive Branch after a honeymoon in Montego Bay, Jamaica.