Aromas evoke past journeys — or paths not taken 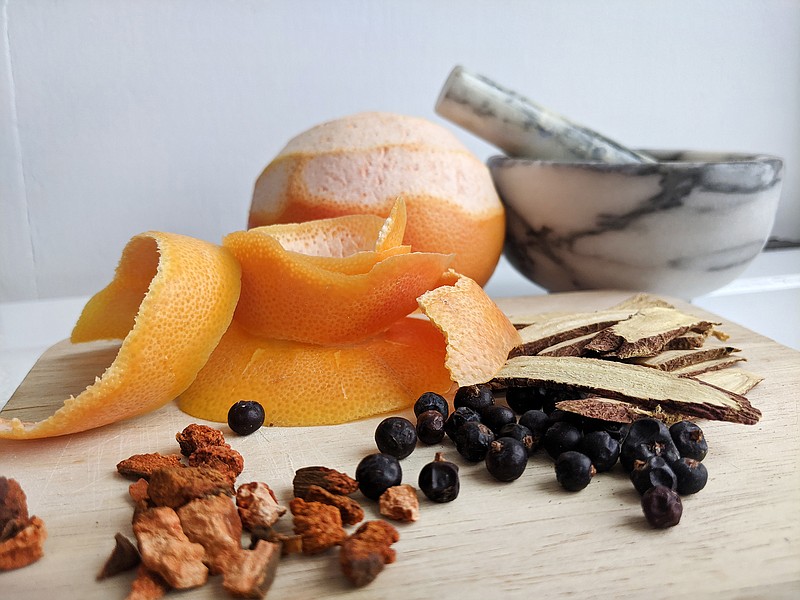 A wide-mouth jar sits high on a shelf in my Vermont kitchen, filled to the halfway mark with a bronze-colored liquid. Opening it is a sensory journey to the sunny winter I once spent in Cyprus: The contents evoke wild oregano crushed underfoot, roses left to honor Aphrodite, and plump grapefruit bought from a roadside stand.

Dreaming, as usual, of faraway places, I had infused these and other ingredients into vodka to make amaro, a bitter, Italian-style liqueur. Not only do I love the flavor of amaro, but it's endlessly adaptable, a perfect vehicle for aromas. Sipped over ice — or simply breathed straight from the jar in the middle of the day — my Cyprus-inspired amaro gives me a shiver of instant recognition.

It is not the scent of Cyprus in some universal way; another visit to the island would yield a different olfactory impression. Rather, I bottled the essence of my favorite moments there, like a blustery hike through a pine forest followed by a mug of anise tea. The amaro is an aromatic snapshot of a place I loved, and it has a powerful pull on my memory.

For travelers such as myself circumscribed by the pandemic, aromas offer the chance to revisit cherished journeys. That can be as simple as savoring the bouquet of a favorite wine, making a homemade amaro, or lighting a scented candle.

But the world of aromas — what writer Harold McGee has dubbed the "osmocosm," from the ancient Greek word for odor — invites experiences that go beyond fond memories. In McGee's recent book "Nose Dive: A Field Guide to the World's Smells," he examines the chemistry and history of quotidian scents, explaining that some can be traced back billions of years. And today, researchers are exploring how aroma can facilitate imaginative journeys across space and time, to places you'll never smell in real life, from historic battlefields to the dystopian future of an island in the South Pacific.

Aroma as mental journey isn't a new idea, in particular. More than a century ago, Marcel Proust inhaled a fresh-baked madeleine that triggered vivid memories of his childhood, describing the experience in "Swann's Way," the first of seven volumes that compose "In Search of Lost Time." That experience of aroma-evoked memory became known as the Proust phenomenon, familiar to anyone who has lost track of the present after burying their nose in a box of crayons.

The intensity of such moments could result from how the nose communicates with the brain. Information from the scent-processing olfactory bulb travels directly to the limbic system, which is thought to be associated with emotion and memory, said Harvard neuroscientist Venkatesh Murthy. Visual and auditory information go there by a more circuitous route.

"Our suspicion is that a more direct link ... helps us more directly evoke memories through the sense of smell," Murthy said. But those memories, he noted, are not necessarily memories of the aromas themselves. In fact, it can be difficult to mentally reconstruct the smell of, say, a blooming rose. "It's not like you're putting the smell of the rose in your head." It's more of a trigger, Murthy explained. "The smell of the rose evokes your walk in the garden."

YOU NEED A STORY

Unlocking the full impact of aroma, in other words, takes more than a smell. For that, you need a story, a philosophy embraced in the scented candle industry, which has been booming in the pandemic.

Some candlemakers use stories to conjure places we sorely miss right now: The Farmers Market candle made by Anecdote Candles purports to smell "like long lines and tote bags," for example, while the New York City candle made by Homesick offers "distinctive scents of spring days in Central Park." Without the descriptions, they're just aromatherapy.

"Re-creating a scent is never enough," said Dutch scent historian Caro Verbeek, explaining that together, storytelling and aroma can merge into a singularly powerful experience. Verbeek has helped create multi-sensory exhibits using historic aromas, which she said can offer people "a very direct connection to a past they were never part of themselves."

For Verbeek's Ph.D project, she worked with perfumer Birgit Sijbrands of International Flavors & Fragrances to re-create the smell of the 1815 Battle of Waterloo, where Napoleon Bonaparte met defeat amid a pungent blend of horse sweat, human anxiety, gunpowder and churning mud. At the Amsterdam Rijksmuseum, visitors stood before a towering depiction of the battle while inhaling the custom fragrance from blotters or tiny pumps.

"Things seem so much more real when you smell them," Verbeek said. "They trigger your emotional brain and your memories." Verbeek watched visitors take it all in: One woman exclaimed that the horses on the canvas had started to move, while others recalled childhood horseback rides or walks through the forest. "What many people told me is that the perfume of Napoleon — because that's in the composition — reminded them of their grandmothers," Verbeek said. "You can really connect the personal memory to more of a collective memory."

Verbeek's aromas offer a bridge to the past; other innovators are using scent to peer into the future. A platform created by OVR Technology (Olfactory Virtual Technology) releases aroma to make virtual reality experiences more vivid, with plans for applications that range from post traumatic stress disorder treatment to trainings for hazardous jobs. Aroma "dramatically enhances that feeling of immersion," said OVR Technology Chief Executive Officer and founder Aaron Wisniewski, echoing Verbeek's observations at the museum.

On a February morning that smelled only of snow and salted roads, I visited the OVR Technology office in Burlington, Vt., to see for myself. After I slipped on a virtual reality (VR) headset, I met a digital tour guide named Erin, who invited me to uproot a red rose from a pixelated flower patch hovering in midair. The bloom reminded me of perfume, while the roots gave off the damp, organic scent of fresh dirt and gardens. After the frigid weather outside, it was a breath of pure summer.

But Wisniewski explained that the most promising aromatic journeys, such as those designed by Verbeek, are not always sweet smelling. Treating PTSD requires re-creating battlefield aromas, for example, while firefighters might train in smoke-scented simulations. And at the forthcoming Venice Biennale, OVR Technology will unveil a collaboration with artist Daniel Stricker offering an immersive, virtual journey to one possible future faced by Samoa, a low-lying, South Pacific country that's particularly vulnerable to rising sea levels.

In it, the virtual traveler finds herself in the coastal village of Poutasi, which was wiped out by a tsunami in 2009. The Samoan community is rebuilt in three dimensions; a village elder speaks of the effects of climate change and pollution. In every direction, seawater creeps higher and higher, slopping across the floor of nearby buildings.

Scents of standing water, sewage and trash leak from the VR headset, the aromas of unchecked climate change in an island nation. To forestall that particular future, the project suggests, perhaps we have to travel there ourselves, seeing it — and smelling it — firsthand.