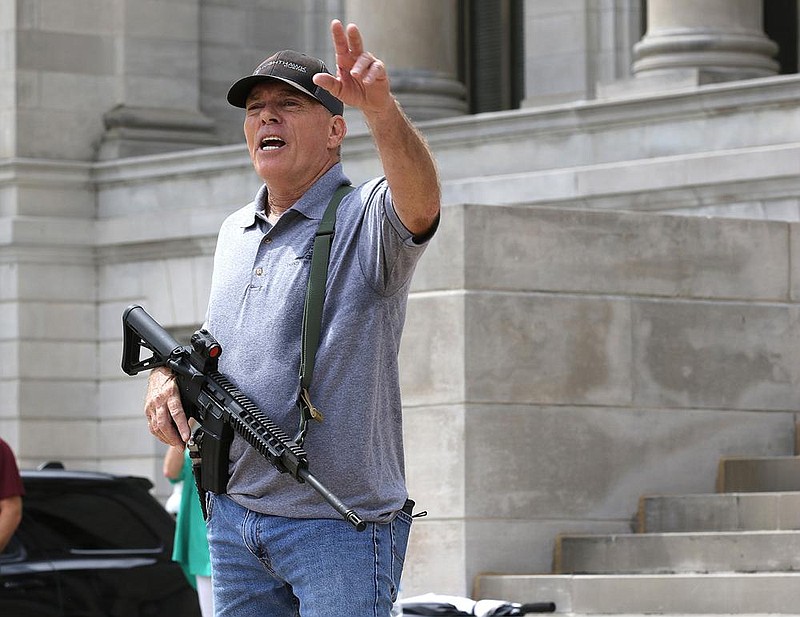 Robert "Bigo" Barnett talks to the crowd after an announcement by Rep. Dan Sullivan of a lawsuit aimed to overturn Gov. Asa Hutchinson's months-long state of emergency as well as his administration's public health directives, during a rally at the steps of the state Capitol on Thursday, Sept. 3, 2020, in Little Rock.

The Gravette man charged in connection with the U.S. Capitol riot said his hometown police officers practice their marksmanship at his private firing range.

"All the Gravette cops come out and shoot at my private shooting range," Richard "Bigo" Barnett told a Fayetteville police officer on Sept. 20, according to recently released videos.

Gravette Police Chief Chuck Skaggs said his department has its own firing range for qualifications and training.

"I cannot see any of our officers using a private range when they can use ours," Skaggs said in an email. "We require an instructor with them if they use it for themselves. I would believe Mr. Barnett was throwing some bravado around. We train specifically at ours. I don't know if any of our officers personally know him."

"As far as I know, I don't think any of our police officers really knew the guy," Maddox said.

Barnett has been charged with seven counts in the Jan. 6 riot at the Capitol, including one for entering the building with a dangerous or deadly weapon.

[Video not showing up above? Click here to watch » https://www.youtube.com/watch?v=HuG7r7QO2H0]

Armed with a stun gun, Barnett entered House Speaker Nancy Pelosi's office in the Capitol and posed for pictures with his feet propped up on a desk, according to the charges against him. The photos were spread by media around the world.

Barnett's behavior while armed at two events in Fayetteville last year caught the attention of the chief judge of the federal court in the Dis trict of Columbia who said it showed "a pattern of engaging in provocative behavior."

Fayetteville police questioned Barnett after receiving a call about an armed man near the Washington County Courthouse on Sept. 20, which was a Sunday. Barnett had a rifle over his back and a pistol on his hip, according to the incident report.

Barnett, who wasn't arrested, told police that he was there to protect "Save the Children" demonstrators, who were at the intersection of College Avenue and Dickson Street.

Soon after being approached by two Fayetteville police officers, body camera footage shows Barnett saying, "I know you guys. I talk to your chief on the phone all the time."

The Sept. 20 conversation was recorded by both officers' body cameras. Fayetteville police made the video available to the Arkansas Democrat-Gazette on Friday after a request under the Arkansas Freedom of Information Act.

Fayetteville police were called about Barnett being in the same area on Saturday, July 25, during a "Back the Blue" rally supporting police. The caller said Barnett had lifted his rifle in the general direction of her passing car, but surveillance video from the courthouse indicated that wasn't the case, according to the incident report. Barnett wasn't arrested that time, either.

Fayetteville police said there is no body-camera video of Barnett from the July 25 event.

The proximity of these events to the courthouse was of interest to Chief Judge Beryl Howell during a Jan. 28 federal court hearing in the District of Columbia, but prosecutors in Washington didn't seem familiar with Fayetteville, so they couldn't answer the judge's questions about that.

In any event, Howell ruled that there was sufficient evidence to keep Barnett in jail until his trial, which has yet to be scheduled.

"The government has presented overwhelming evidence that this defendant, Richard Barnett, enthusiastically participated in this act of assaulting the Capitol and disrupting the democratic process," Howell said during the hearing. "What happened on that day at the U.S. Capitol is criminal activity that is destined to go down in the history books of this country."

Barnett took an envelope from a desk in Pelosi's office, leaving a quarter and a nasty note behind for her, according to a "statement of facts" in the case.

"He not only entered the Capitol without authority, he strutted into the office of the speaker of the House of Representatives, Nancy Pelosi, sat behind her desk and had pictures of himself, smiling and seemingly enjoying himself," Howell said.

The Jan. 6 riot escalated from a "Stop the Steal" rally in which supporters of former President Donald Trump entered the Capitol and attempted to stop Congress from certifying the Electoral College vote indicating Joe Biden had won the presidential election.

Five people died during the riot and members of Congress cowered in their offices and in bathrooms.

Later on Jan. 6, after the Capitol was cleared of those who had entered illegally, Congress proceeded with business and certified Biden's election.

During the Jan. 28 hearing, Howell asked if "Save the Children" was affiliated with QAnon, a pro-Trump conspiracy theory about a cabal of child-eating Satanic pedophiles.

"Your honor, I believe that it very well could be," an assistant U.S. attorney responded.

According to The New York Times, conspiracy theorists hijacked the "Save the Children" movement.

"It started out as a fund-raising campaign for a legitimate anti-trafficking charity, but was then hijacked by QAnon believers, who used the movement to spread false and exaggerated claims about a global child-trafficking conspiracy led by top Democrats and Hollywood elites," Kevin Roose wrote for the Times on Sept. 28.

The day after the Capitol melee, Barnett turned off the location services on his cellphone and drove home to Arkansas, according to prosecutors. Barnett paid in cash and covered his face during the drive.

He arrived home midafternoon on Jan. 7, and returning a call from the sheriff, agreed to surrender to FBI agents at the Benton County sheriff's office the next day.

"The sheriff's office was merely a meeting place for Mr. Barnett and the FBI," Lt. Shannon Jenkins, a spokeswoman for the sheriff's office, said in an email Friday. "Benton County did not have any charges. This case belongs to the FBI."

When Barnett reported to the Benton County sheriff's office on Jan. 8 to surrender, he told agents that he didn't have his phone on him.

"He also commented that the agents may not find much at his house because he had people packing it up the night before," according to a redacted search warrant affidavit.

During a Jan. 15 detention hearing in federal court in Fayetteville, FBI Special Agent Jonathan Willett said Barnett told the agents: "If y'all go out there and do a search warrant, you can see all my s*. You ain't going to find nothing out there. I assure you I'm a smart man. There's not anything there."

Willett said video and photographs from the Capitol on Jan. 6 showed images of Barnett using a smartphone.

"The video showed clearly that he had a cellphone that he was either talking on or recording and using in the Capitol building," Willett said during the detention hearing. "The photos showed him having a cellphone in his hand."

Agents searched Barnett's house, finding the stun gun package but not the weapon itself.

During a videoconference detention hearing on Jan. 15 in federal court in Fayetteville, Tammy Newburn, Barnett's wife, was asked if they have a firing range on the property.

"Down in the holler, we do have a firing range to practice," she said.

Newburn said Barnett's firearms had been given to a friend when it became apparent he was going to be arrested in connection with the Capitol riot.

Newburn said a probation officer told her all the guns would have to be removed if Barnett were allowed to return home. Newburn said she was also concerned about someone breaking in and stealing the guns while no one was home.