Victims of frigid conditions include 11-year-old boy who died in his bed by Compiled by Democrat-Gazette Staff From Wire Reports | February 21, 2021 at 3:10 a.m. 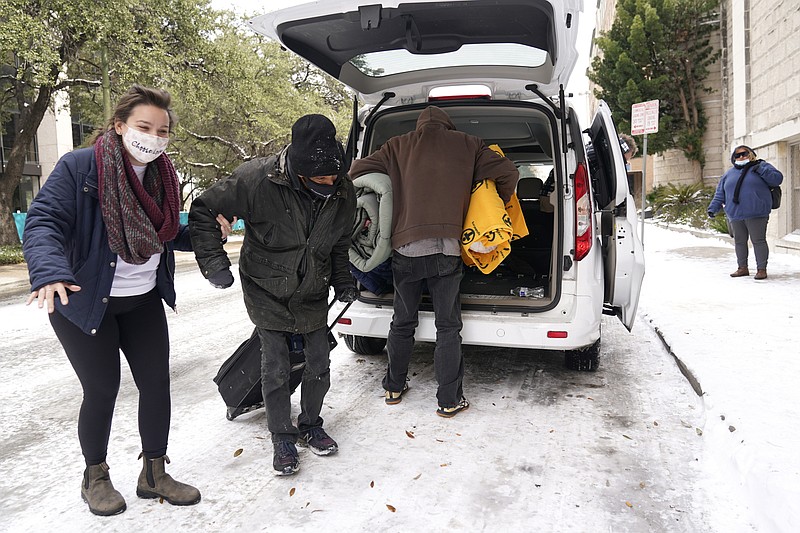 FILE - In this Feb. 16, 2021 file photo, Morgan Handley, left, helps move people to a warming shelter at Travis Park Methodist Church to help escape sub-freezing temperatures, in San Antonio. With the snow and ice clearing in Texas after the electricity was cut to millions as temperatures plunged, people are being found who likely froze to death as they struggled to stay warm in their unheated homes. (AP Photo/Eric Gay, File)

DALLAS -- With the snow and ice clearing in Texas after days of unusually low temperatures, bodies are being found of people who probably froze to death as they struggled to stay warm after electricity was cut to millions of homes.

Of the roughly 70 deaths attributed to the snow, ice and frigid weather nationwide, more than a dozen were people who perished in homes that had lost heat, and most of those were in Texas. They include an 11-year-old boy who died in his bed in Conroe, near Houston, and at least six people in Taylor County.

"I can think of probably one point in one hour we probably got 10 of those calls," said Bishop, adding that some of the county's roads were covered in snowdrifts up to 4 feet deep.

Of the six people who died in Taylor County last week, three were in the city of Abilene.

Abilene Fire Chief Cande Flores said a homeless 67-year-old man died Monday. Two other people died Wednesday, including a man found dead in his bed. Flores said the freezing temperature in the man's house was the same as outside. The man's wife was hospitalized.

Another man died at a health care facility after a lack of water pressure made medical treatment impossible.

"After hours and hours, it leads to a very dangerous condition," said Dr. Robert Glatter, an emergency physician at Lenox Hill Hospital in New York City.

Matt Zavadsky, a spokesman for Fort Worth-area ambulance provider MedStar, said most of the hypothermia calls his agency received were from people in their own homes, where temperatures had fallen to 50 degrees or lower.

MedStar reached a peak Wednesday of 77 hypothermia calls, Zavadsky said. Some people reported numb hands and feet, while others had more severe symptoms.

"You had people who had been so cold for so long that they were shivering uncontrollably; they may have had a decreased level of consciousness, which is not uncommon when you are in hypothermia for a prolonged period of time," he said.

Some who were taken to hospitals had reached the point where they were no longer shivering, "which is a very bad sign," Zavadsky said.

At first, the body will try to generate heat by shivering and boosting its heart rate. But if internal temperatures keep dropping, "those things start to slow down," said Dr. Jeff Pothof, an emergency room doctor at University of Wisconsin Health in Madison. The body will restrict blood circulation to extremities to maintain blood in the core and keep internal organs warm.

"You might not understand exactly what's going on," Pothof said. "And that's a vicious cycle because you can't take the action you need to."

Some of the older people who died in Texas were found outside their homes. It wasn't clear what prompted them to go outside.

Poor circulation eventually prevents the heart, brain and other vital organs from functioning, leading to death. About 32 people die from the cold annually in the U.S., according to the National Weather Service.

"It can creep up on you," he said, especially if confusion has begun to set in. "Your ability to think clearly is not as good, so it's likely people won't pick up on those signs and symptoms."

Babies, children and older people are at the highest risk for hypothermia because of poor circulation and temperature regulation. Those with heart problems, asthma, emphysema, chronic lung disease and diabetes, and those who use tobacco are also vulnerable.

Some strategies for staying warm can be more hazardous than helpful.

Bundling up too much under blankets or layers of clothing can be dangerous if it leads to excessive sweating, which can pull heat away from the body.

And during weather-related power outages, people might use propane heaters, run generators or burn charcoal or wood indoors -- all of which can lead to fires or deadly carbon monoxide poisoning.

"These are all setups for disaster," Glatter said.

The Louisiana Department of Health said a 68-year-old man and a 44-year-old woman died of carbon monoxide poisoning after a generator was placed in a camper where they sought shelter in Avoyelles Parish. The parish coroner confirmed the deaths as being storm-related, authorities said.

In Texas, the Cy-Fair Fire Department, which provides emergency services to the Cypress-Fairbanks area outside Houston in Harris County, reported Tuesday afternoon that over a 24-hour period at least 23 people, including 12 children, had been taken to hospitals for treatment of carbon monoxide poisoning.

All the incidents were because people were using charcoal grills to heat their homes in the bitter cold, the department said. It warned residents not to use gas ovens, or take outdoor grills and generators inside to heat their homes.

Carbon monoxide "is an odorless/colorless gas that can kill you," the department said.

Information for this article was provided by Jamie Stengle, Marion Renault and staff members of The Associated Press; and by Paulina Villegas of The Washington Post. 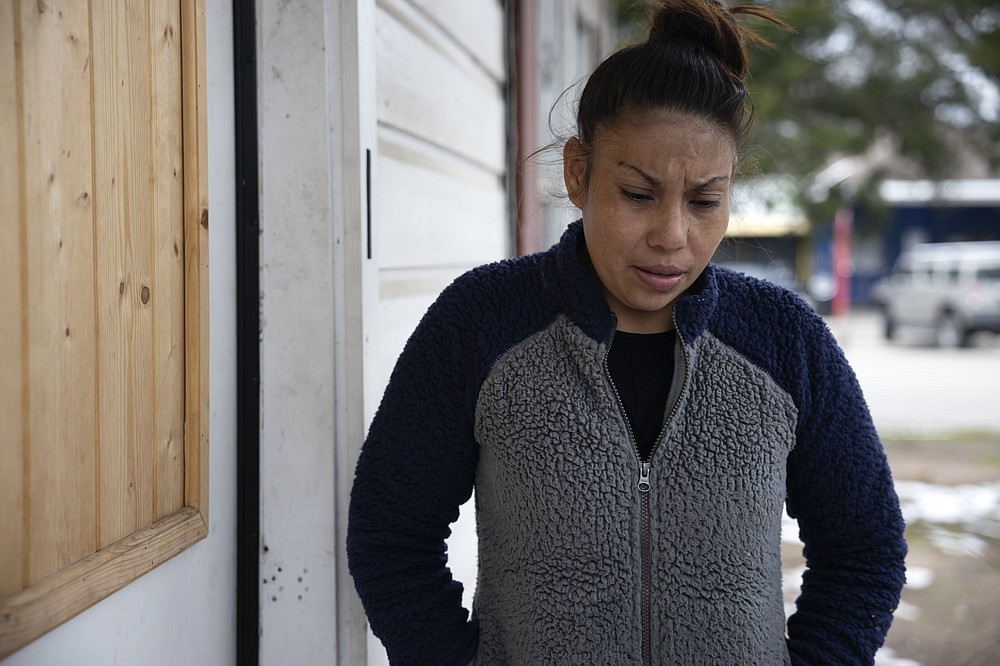 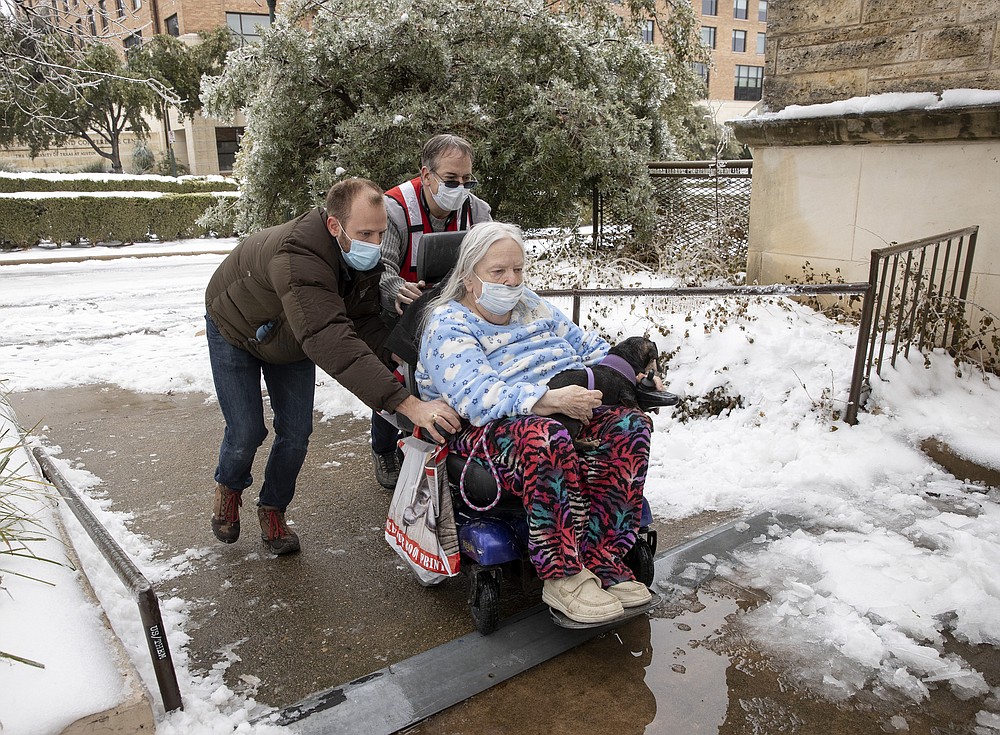 FILE - In this Feb. 17, 2021 file photo, Dori Ann Upchurch is helped by Austin Disaster Relief Network volunteer Cody Sandquist, left, and a Red Cross volunteer to a warming station in Austin, Texas, after being evacuated from her home. With the snow and ice clearing in Texas after the electricity was cut to millions as temperatures plunged as people struggled to stay warm in their unheated homes. (Jay Janner/Austin American-Statesman via AP, File) 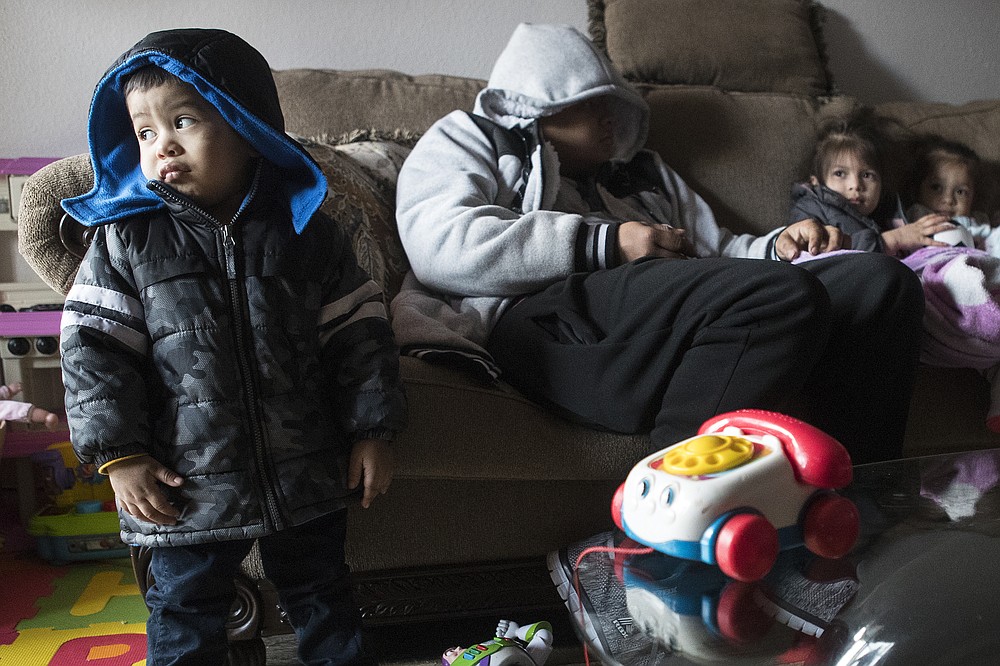 FILE - In this Feb. 15, 2021, file photo, Eithan Colindres wears a winter coat inside after the apartment his family lives in lost power following an overnight snowfall in Houston. With the snow and ice clearing in Texas after the electricity was cut to millions as temperatures plunged as people struggled to stay warm in their unheated homes. (Brett Coomer/Houston Chronicle via AP, File) 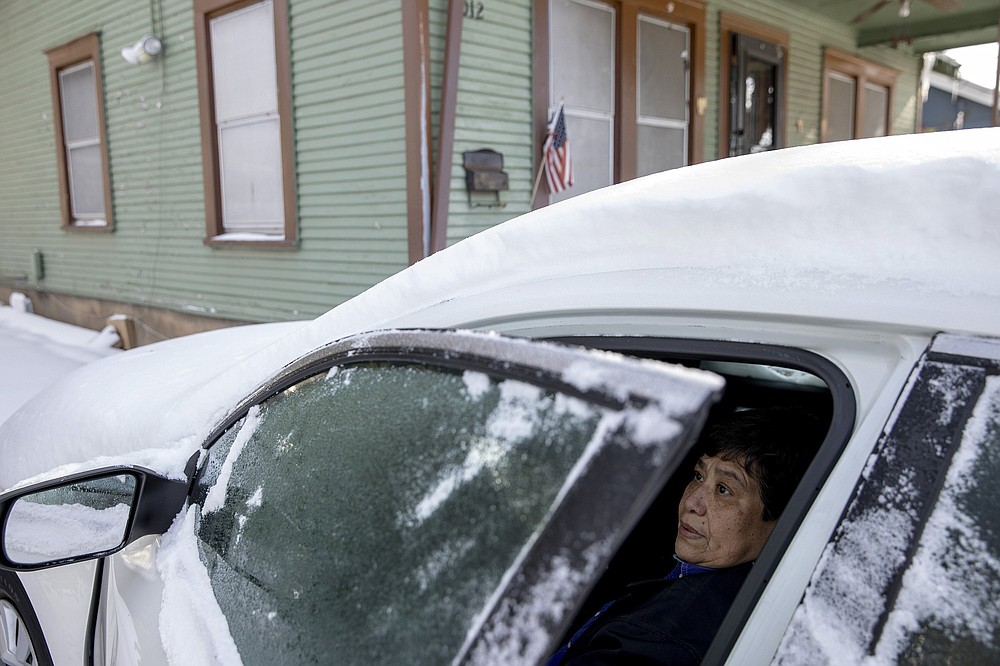 FILE - In this Tuesday, Feb. 16, 2021, file photo, Maria Pineda warms up in her car outside her home in East Austin, Texas, during a power outage caused by a winter storm. Pineda said her home has been without power since early Monday morning. (Jay Janner/Austin American-Statesman via AP, File)
ADVERTISEMENT