Community pulls together to get water to women's shelter in need 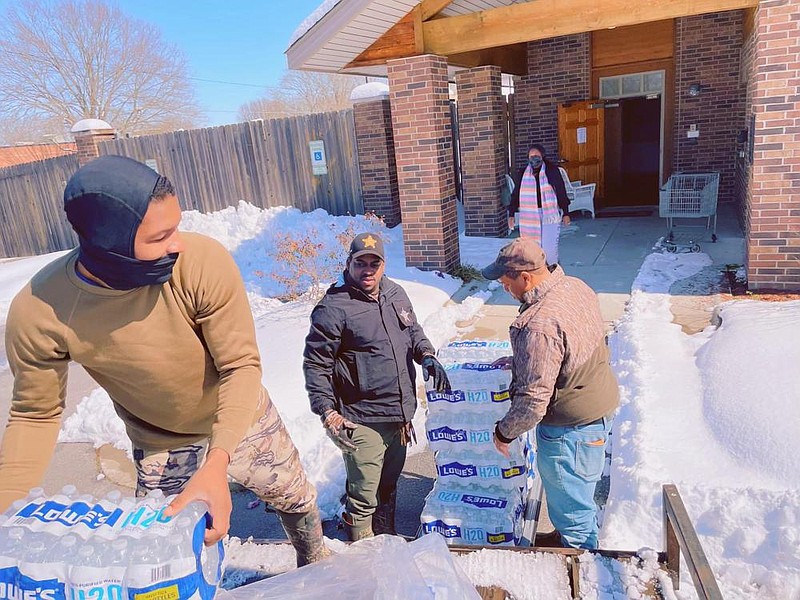 Jefferson County Deputy Cameron Johnson (from left), Sheriff Lafayette Woods and Sgt. Courtney Kelly unload 40 cases of water donated by Lowe’s on Friday to the CASA Women’s Shelter. Standing at the shelter door is agency board member Santrice Kearney. (Special to The Commercial)

But through it all, Pine Bluff continues to weather the storm, coming together to help those in need during these dire times.

When the CASA Women's Shelter sent out a plea for help Thursday saying it had no water because of the ongoing water problems in the city and that six families and children were without water, CASA board members Santrice Kearney and Keidra Phillips-Burrell and the Jefferson County sheriff's office immediately reached out to their resources to lend a helping hand.

"Water is a very critical and essential resource for everyone, but with temperatures dropping below freezing this week, waterlines in homes and businesses were at high risk of bursting," said Jefferson County Sheriff Lafayette Woods. "Unfortunately, our local CASA Women's Shelter that currently serves as temporary housing for multiple families and children was negatively impacted."

Woods said he reached out to the Pine Bluff Lowe's store manager Jose Rodriquez, who donated 40 cases of water without hesitation.

Rodriquez has been very helpful in the past to address needs for nonprofits, Woods said. "Rodriquez jumped into action and had it ready immediately."

Lloyd Franklin and Jefferson County sheriff's office Sgt. Courtney Kelly and Deputy Cameron Johnson helped deliver emergency water to the shelter Friday, which was just in time as the shelter had just depleted its reserves.

"We were in need," said CASA Women's Shelter Domestic Violence Advocate Linda Burks, a school teacher that works at the shelter overnight on the weekend. "We are low on everything and greatly appreciate what they have done."

Burks said the shelter is still in need of items, as the water is being used for baths for more than a dozen people.

"We are having to boil the water first to take baths," Burks said.

"This is just another example of community coming together when called upon to do so without hesitation and just shows you that even though we are small and our resources are limited, people that are in position to donate and provide those essential resources are more than willing to do that in this community," Woods said. "We've seen it time and time again, and it's remarkable and speaks on the type of community that we have."