Flowers family is honored for service 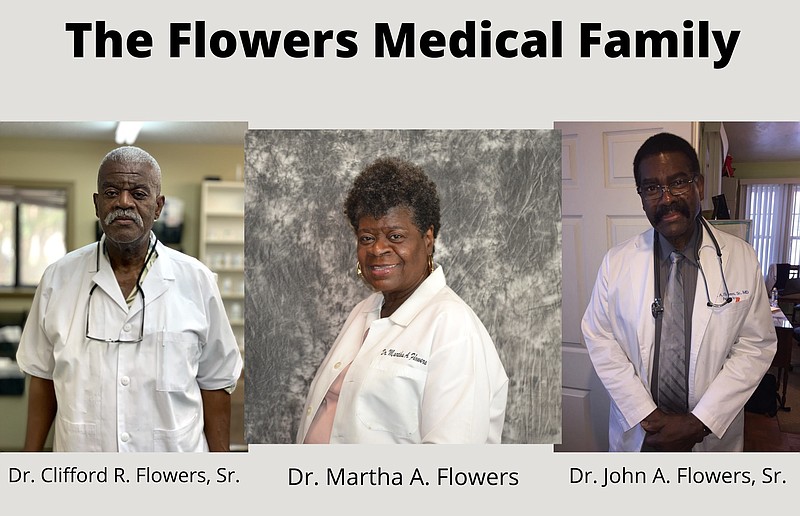 The Flowers family continues to serve the medical needs of the community. (Special to The Commercial)

The Flowers family is recognized as serving Arkansans in medicine, law and politics.

Three Flowers siblings have served thousands of patients over many years. The two brothers and sister continue to serve their patients under one roof at the Flowers Medical Building, where their father, the late Dr. Cleon Flowers Sr., owned and operated The Links Hospital and where the family resided for over three decades.

"I was told that at the age of 5, I proclaimed that I wanted to be a doctor," Martha Flowers said. "Of course, my inspiration was my father who was inspired by his hometown physician, Dr. John Ellis of Stamps, Ark."

Martha Flowers begins her story with that of her father's. Cleon Flowers Sr. began his family medicine practice in 1946 at the Masonic Temple. The original name of the business was Cleon A. Flowers, MD Physician & Surgeon.

"After completing an externship in Liberia, graduating from medical school, and serving as the medical director at the Lee County Cooperative Clinic in Marianna, Ark., I went into practice with my father in 1977, and we became Flowers Medical Clinic, practicing together until 2002. From that time, I practiced solo until Dr. Nana-Aisha Adamu and Windell Johnson, APRN, came on board last year," said Martha Flowers.

This historic family practice has operated in two sites over the span of 75 years, in the Masonic Temple (1946-1993) and in Suite C of the Flowers Medical Building (1993-present). Martha Flowers attributes the solid foundation for her and other members of her family to her father's legacy, citing a strong association with her brothers Dr. Clifford Flowers Sr. and Dr. Randall Flowers at Flowers Pharmacy, Dr. John Flowers Sr. at Flowers Pediatric Clinic, as well as Dr. Cleon Flowers Jr., a dentist who practices on the East Coast.

In addition to what she describes as "the greatest challenge as a black physician is that of getting the best services, perks, and resources for all of my patients that are available," Martha Flowers also points to the responsibility and rewards of mentoring the hundreds of students she has helped over the decades.

Flowers Medical Clinic has been a place where young people could go to learn about the science, practice, and business of medicine. Whether providing shadowing or internship opportunities to high school and college students, or rotations and preceptorships to medical/nursing students and resident physicians, Martha Flowers has freely shared her foundation of exposure, advice, and training.

Pre-medicine courses, test-prep, extensive reading, mentorship, and direct exposure to medicine comprise a formula for success that she has shared with students seeking her advice about going into medicine. Her past service on the admissions board at the University of Arkansas for Medical Sciences' College of Medicine and as an applicant interviewer further fueled her passion for mentoring students and physician residents, which has never changed to this day.

Likewise, Martha Flowers' commitment to her patients has been consistent, no matter the health trends and crisis. While the pandemic has changed her approach to comply with Centers for Disease Control and Prevention guidelines for covid-19, Flowers Medical Clinic continues to treat longtime patients, to engage the community in diabetes education and to continue the legacy of service started in 1946.

Flowers Pharmacy was established in 1980. A very reserved and focused Clifford Flowers Sr. serves as the family pharmacist in Suite A at the Flowers Medical Building. Entering the pharmacy, visitors are met with the history reflected by pictures of Clifford Flowers' late father, uncle, and grandmother, all of whom set examples of the service and entrepreneurship that define Flowers Pharmacy. By the time patients reach the counter, they are met with professionalism and a personal touch that people do not get at chain pharmacies.

Inspired by only a couple of black pharmacists that he encountered as a teenager, Clifford Flowers' dedication to the profession is part of a broader commitment to serving his community. Forty years for a pharmacy makes one pause and think about the number of pharmacies that have come in and out of the community, and all the different faces that have changed over the years. The pharmacist serves an important role in the black community, because most are the second point of contact after the doctor's visit.

Flowers Pharmacy has served thousands of customers. Clifford Flowers is still passionate about the practice of pharmacy and helping others. He discusses the value of medicinal therapies and treatments to patients dealing with the smallest bacterial infections to the most serious medicines that prolong the lives of heart and cancer patients.

He further talks about how he has encouraged customers to have different tests performed to screen for conditions and ailments that too often disparately affect Black people. Clifford Flowers says that his recommendations have helped patients identify undiagnosed terminal illnesses, get the treatment they needed, and possibly preserve longevity of life.

His advice to young entreprenuers starting in the business is "research your market and project expenses and income." He added that they should establish relationships with their community. Clifford Flowers reflected on how much the business of pharmacy has changed over the past 20 years, in a way that has affected the patient-pharmacist relationship as well as patient care. The introduction of third-party "middlemen" who drive drug costs, patient co-pays, and pharmacy reimbursements from insurance companies and Medicaid have been some of the greatest challenges for him.

Despite industry challenges, or even the challenge of the coronavirus pandemic that hindered the ability of patients to receive medical care and have their prescriptions filled, pharmacists have stood in the gap for patients during the pandemic and are now at the forefront of delivering vaccinations across the nation.

As Flowers Pharmacy fills prescriptions at the counter and drive-thru window, Clifford Flowers remains a professional that the community trusts resulting from 40 years of integrity and dedicated service to patients and the community.

"I worked as a postgraduate fellow under my uncle, Dr. Rufus Caine, at Arkansas Mechanical and Normal College [AM&N, now the University of Arkansas at Pine Bluff] who served as head of the nath and science department for over 40 years. It gave me an opportunity to work with other aspiring pre-med students at AM&N," John Flowers said.

Flowers Pediatric Clinic was established in 1987, when John Flowers opened the doors of his pediatric clinic at 316 W. Fifth Ave. After serving his patients on Fifth Avenue for 33 years, he recently moved to Suite B of the Flowers Medical Building. John Flowers' pathway to medicine began at Meharry Medical College in Nashville, Tenn., one of the nation's three historically black medical colleges where his father, brother, sister, cousin, and he graduated. His pride as a pediatrician shows in the stellar conversation he delivers about the profession and the large display of accomplishments on his walls from his educational and service awards.

Although a long-standing business in the health industry, Flowers Pediatric Clinic is not only John Flowers' life's work but a labor of love that he sees as his portal through which to help others, serve his community and give back. He has given back in many ways, including leadership and membership in the Arkansas Medical, Dental and Pharmaceutical Association and Southeast Arkansas Medical Network, mentoring UAPB pre-med students as well as nursing students he has served as a preceptor for, advocacy for literacy and higher education.

John Flowers beams with pride when talking about Pine Bluff and the generations of children he has treated throughout the region. He said that he treats the grandson of his first patient from the Fifth Avenue clinic. John Flowers readily expresses profound gratitude for the opportunities he was afforded by his parents, grandparents, uncles, and other family professionals who were his role models and support system, steering him to medical school and beyond.

Through his father's church, he received a Rockefeller Fellowship in Lagos, Nigeria, under the Institution of Higher Learning in Medicine for a medical review article he submitted to a national medical journal. Dr. O. Ransom-Kuti, a world-renowned pediatrician was his mentor.

John Flowers recounted his experiences with Ransom-Kuti in "the bush" where he studied tropical pediatric infectious diseases.

"I would go to the bush, sometimes every weekend, where there were no labs, or X-rays, and blood had to be drawn and sent to a lab in Lagos," he said.

He described watching a patient receive a heart procedure that he could not perform as he was not yet licensed, but later performed during his residency at Martin Luther King Hospital in Los Angeles.

John Flowers passionately talks about his struggles as a black physician. His conversation peered into his training as a resident at Martin Luther King Hospital, where he led a strike for his patients to receive quality health care and fair treatment. The social justice stances he took were influenced by his experiences as a medical intern, during which he witnessed poverty and inhumane treatment. He also detailed the impact that exposure to the many black physicians, dentists, and pharmacists in Pine Bluff growing up had on him.

What equally affects him today is how "the number of black health professionals in Pine Bluff have dramatically declined over the years while the social issues and racial health disparities are worse than when I was a child."

Thousands of children have experienced John Flowers' medical care, his concern about their progress at home and in school, as well as his seemingly endless probing questions about their interest in becoming a doctor one day. He still tells his young patients that he needs them to go to medical school and come back and help him someday. While he waits, he continues to see patients and give back, mostly through paid internships for UAPB pre-med students.

The Generator wanted to know how John Flowers' clinic had been affected by covid-19. He said that the disparate impact of the virus on Pine Bluff families is one of his most pressing concerns. His clinic has been affected by the pandemic like most businesses. However, John Flowers' response has not been limited to outfitting his office with all the protective essentials. In his role as a trusted health leader of nearly five decades, he warns patients and parents to be incredibly careful about becoming exposed and advises adults to get vaccinated.

Editor's note: This article was produced by The Generator. The focus of the weekly articles is to recognize the Black establishments of Pine Bluff. The Generator is an innovation hub powered by Go Forward Pine Bluff.