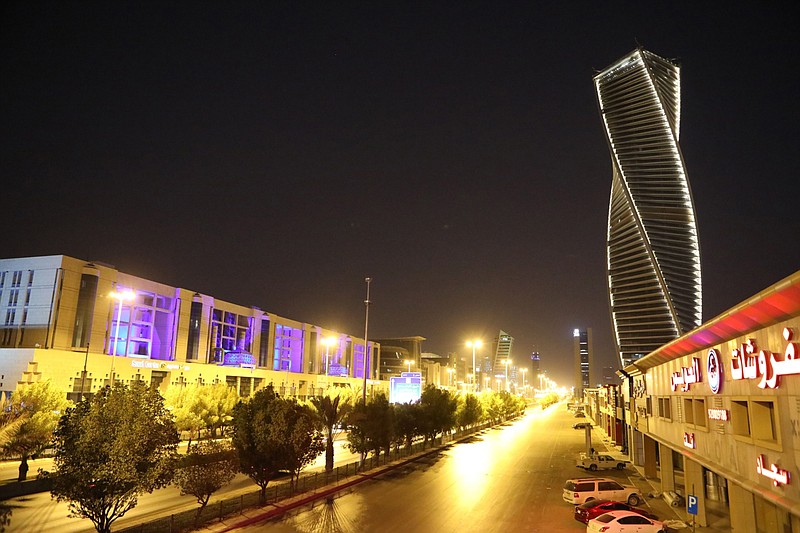 Light illuminate the Al Majdoul skyscraper and a city road at night in Riyadh, Saudi Arabia, on Tuesday, July 28, 2020. Saudi Arabia suffered a simultaneous decline in oil and non-oil revenue as the global pandemic combined with lower energy prices to jolt the kingdom's public finances. MUST CREDIT: Bloomberg photo by Maya Anwar

Saudi Arabia's ultimatum for global companies to move their regional hubs to Riyadh by 2024 or lose business is the kind of decision making that has made some wary of investing there.

The millions of dollars in costs, sudden policy changes and arbitrary legal rulings mean companies will need to weigh the risks of moving there with the potential rewards Crown Prince Mohammed bin Salman's economic overhaul promises.

Saudi Arabia said last week state contracts would go only to companies with regional hubs in the country to stop economic "leakage." It gave few details, fueling the kind of uncertainty many regional executives say complicate their dealings with the world's top oil exporter.

Some businessmen say Saudi Arabia is a sleeping giant that's waking up, with a consumer market three times the size of the United Arab Emirates, planned mega-projects worth hundreds of billions of dollars and a young, rapidly-changing society that's almost unrecognizable from the ultra-conservative kingdom of five years ago.

But one manager at a multinational headquartered in Dubai, the Gulf's main business hub, said companies know the political tide can turn fast in Saudi Arabia. The lack of legal recourse they have makes them vulnerable as most contracts come via the state so it's difficult to chase unpaid money, he said. Like others he spoke on condition of anonymity because of the sensitivity.

Companies have mostly looked past Saudi Arabia's arrests of businessmen and royals in what it called a crackdown on corruption, and the killing of a dissident columnist in 2018. Yet sudden shifts like tripling value-added tax create uncertainty and cost.

Saudi officials are frustrated by the consultants and executives working on Saudi projects who based themselves in Dubai -- a business-oriented city that draws in millions of foreign workers.

"It's a combination of desperation and a little bit of overreach" said Ryan Bohl, a Middle East analyst at Stratfor Worldview. "It's going to be hard to convince multinationals and regional giants to pick sides," he said, predicting Riyadh would make exceptions and find ways for companies to function in both.

A Saudi government presentation to investors seen by Bloomberg said officials were working on an "attractive incentive package" for Riyadh's King Abdullah Financial District, set to become a special economic zone. Subject to final approval, sweeteners include a 50-year exemption from 20% corporate tax and a waiver of rules around hiring Saudis for at least 10 years. The presentation also touted the potential exemptions to Saudi laws based on investor needs and an easier work permit system.

Dubai shouldn't underestimate the willingness of companies to follow the money, a Dubai businessman said. The Saudi plans mean Dubai has to be inventive and stop relying on a model of charging fees and making the city more expensive to do business in.

The UAE is taking the challenge seriously and has made reforms to try to attract and keep foreigners as the pandemic batters the tourism and logistics sectors. UAE officials have welcomed the competition.

"The replication of this model in the region is proud testimony to" the UAE's success, Anwar Gargash, a diplomatic advisor to the UAE's president, wrote in a Tweet. "We realize that an expansion of prosperity, tolerance and openness is in the interests of the region and of the Emirates."

A manager at a global food company with regional headquarters in Dubai said they could name a second Mideast hub in Riyadh, or ask local Saudi partners to do so under their names. An advertising executive said their firm would open a Saudi office because of more work but keep Dubai as the regional base.

At the kingdom's flagship investment conference last month 24 companies including Pepsico and Bosch said they'd signed preliminary agreements to locate regional hubs in Riyadh, though they're waiting for the details before firming up commitments.

"The time frame of three years probably recognizes that this will be a big shift for corporations," said Nuno Gomes, head of Middle East Career business at consultancy firm Mercer, estimating the additional costs of being in Riyadh can amount to 15%-25%.

Saudi officials realize the scale of the challenge, and are rolling out changes like a planned overhaul of the judicial system. Rumors are even circulating that a long-standing alcohol ban may be relaxed.

"We need to also create for those expats that we attract a great living environment," Fahd Al-Rasheed, head of the Royal Commission for Riyadh City, said in an interview. "So your spouse needs to be able to work. Your children need to have the best international schools and that's something that we have, and we're working on."