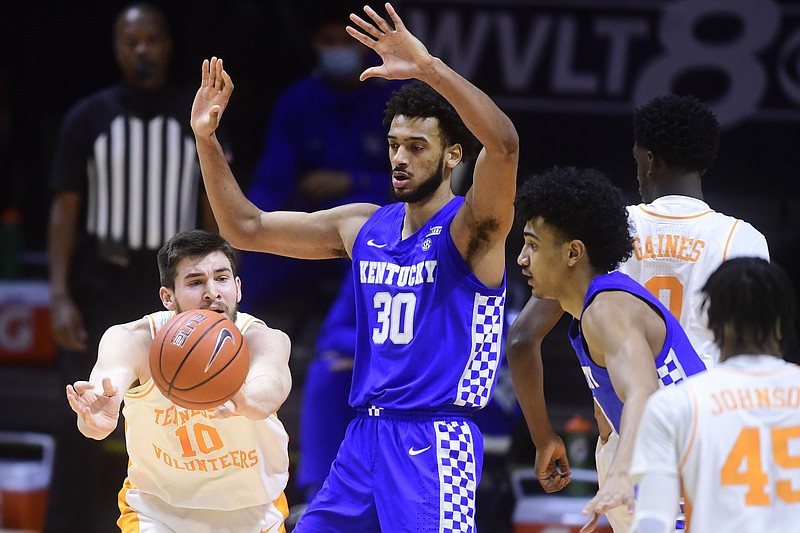 KNOXVILLE, Tenn. -- It's taken a long time, but Kentucky is getting better. Just in time for the postseason, too.

A season full of frustration is finally coming into focus. The Wildcats won their third consecutive game Saturday, topping No. 19 Tennessee 70-55.

Isaiah Jackson scored 16 points and Davion Mintz had 15 in going 5-for-5 on three-pointers in the first half as Kentucky (8-13, 7-7) matched its longest winning streak of the season.

Keion Brooks had 10 points and 12 rebounds and Olivier Sarr scored 10 for a team that's always considered a lock for the NCAA Tournament.

"Even when we were playing bad (this season), I still believed in them," Kentucky Coach John Calipari said. "They're kids. You keep working with them, but you hold them accountable when they're not doing it right."

"That we were beaten by just 15 (points) is a surprise," Tennessee Coach Rick Barnes said. "We were that bad. We got stagnant (on offense). We play better when we move it and get going."

Early in the game, Kentucky had a 15-0 run that made it 23-10. Mintz had two three-pointers in that burst and Jacob Toppin had a pair of baskets.

Up 15 at the break, Kentucky got the lead to 60-40 midway through the second half.

"We're a good defensive team," said Calipari. "We knew this was going to be hand-to-hand combat. (Tennessee has) a chance to be in the Final Four. We came in here and did it. They weren't at their best today. We were at our best.

"I don't even know our record. I just coach them to get better," he said.

Said Barnes: "I did not think we had great mental preparation."

"The first half we played like we practiced (Friday). (Practice) was only 30 minutes, that's the frustrating part. So much of this game is mental and the mental part is not there yet."

TUSCALOOSA, Ala. -- Jaden Shackelford scored a season-high 27 points and No. 8 Alabama came from behind to beat Vanderbilt 82-78 Saturday and move a step closer to a SEC championship.

The Crimson Tide (18-5, 13-1) moved within a win of clinching at least a share of its first regular-season title in 19 years despite an off three-point shooting performance.

Jahvon Quinerly made a late three-pointer and a clinching free throw with 2 seconds left to help Alabama quell the upset bid by the Commodores (6-12, 2-10), who went nearly five minutes without a basket but stayed in it at the free-throw line.

Maxwell Evans made a layup with four seconds left to pull to within 81-78 after rebounding a missed three-pointer. After a quick Vandy foul, Quinerly missed one free throw and made another to clinch it.

Quinerly scored 15 points for the Tide, which made just 10 of 39 three-point attempts (25.6%). Alex Reese scored 10 points while Keon Ellis had eight points and nine rebounds and also made a pair of free throws with 28 seconds left.

Scotty Pippen Jr. scored 24 points and made 12 of 14 free throws for Vanderbilt. Dylan Disu had 17 points and 15 rebounds. The SEC's leading rebounder had 29 points and 16 boards in a loss to Kentucky.

Evans scored 18 points and made 4 of 5 three-pointers.

COLUMBIA, S.C. -- Dru Smith scored 17 and Mark Smith 13 as No. 20 Missouri snapped a three-game losing streak with a victory over struggling South Carolina.

The Smiths, unrelated senior starters, powered Missouri's game-changing 25-12 run in the opening half.

After Trae Hannibal's second consecutive three-pointer drew South Carolina to within 20-17 with 11 minutes left in the half, Mark Smith started the surge with three-pointer and Dru Smith followed with another from long distance.

By the time Dru Smith hit another three-pointer six minutes later, the Tigers were up 38-23 and cruising.

South Carolina rallied in the second half to slice its deficit to 59-52 on Justin Minaya's basket with 10 minutes left.

Then the Smiths got going once more, with Mark scoring seven points and Dru four as the Tigers stretched the margin back to 73-56.

The Gamecocks could not respond.

Missouri finished with five players with 12 or more points. Jeremiah Tilmon had 17 points, Xavier Pinson had 16 points and Kobe Brown 12, all in the opening half.

AJ Lawson had a game-high 22 points to lead South Carolina.

Thomas leads all Division I freshmen in scoring 20-plus points in a game. Thomas was 7-of-16 shooting with 3 three-pointers and made 10 of 11 free throws to lead five LSU (14-6, 9-4) players i2 or more points. Trendon Watford scored 18 with 11 rebounds, Darius Days scored 17, Javonte Smart 16 with 6 assists and Josh LeBlanc scored 12 with 10 boards.

Saturday's 104 points were the most the Tigers have scored against an SEC opponent since 1994. LSU has won three in a row and is 10-2 at home this season.

Sharife Cooper led Auburn (11-12, 5-9) with 26 points but was dinged for six turnovers, four in the first half. Allen Flanigan (Little Rock Parkview) scored 13 points with 5 assists for Auburn while JT Thor scored 10 with 4 blocked shots.

GAINESVILLE, Fla. -- Colin Castleton scored 14 points and Tyree Appleby (Jacksonville) and Tre Mann each scored 13 and Florida led most of the way in a victory over Georgia.

The win ended Florida's two-game losing streak and marked the first win for the Gators (11-6, 7-5) since Jan. 30. Contests against LSU and Texas A&M were postponed due to covid-19 protocols.

Florida used an early -- and decisive -- 13-0 run to build a 20-8 lead and never trailed again. Appleby and Mann scored 12 of Florida's first 20 points. Later, Noah Locke buried a three-pointer with 5:37 before halftime and Florida bloated its lead to 30-12.

Not until Florida removed its starters did Georgia (13-9, 6-9) draw within a single-digit deficit. Sahvir Wheeler made a pair of free throws with 1:44 to go to reduce the deficit to 66-58.

The Bulldogs and Rebels (12-9, 7-7) had gone in opposite directions since the two teams' first meeting. State dropped six of its last seven SEC outings, while Ole Miss won six of its last eight SEC games. 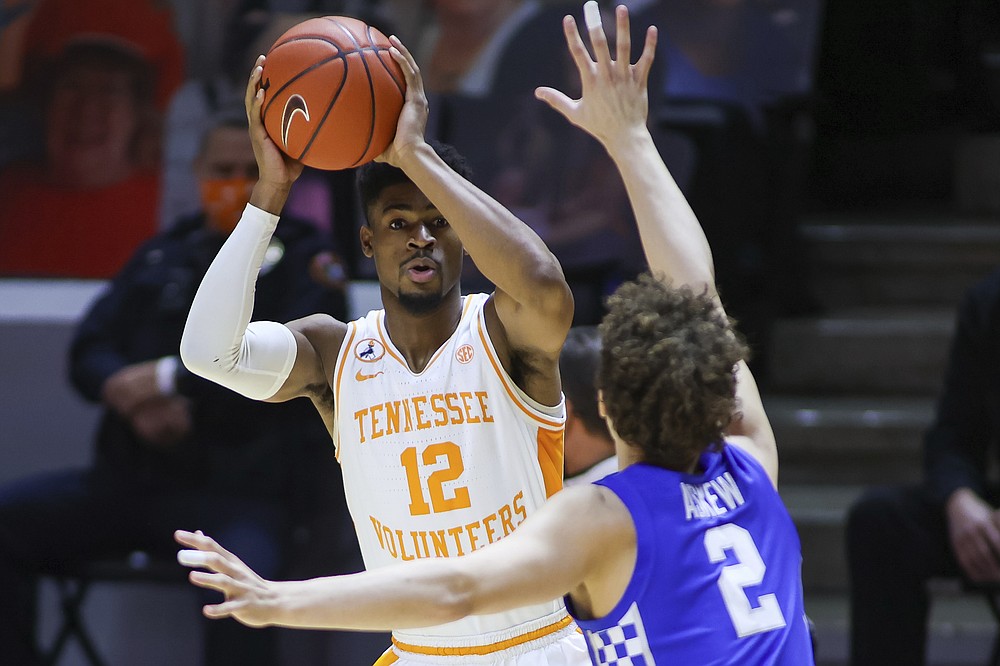 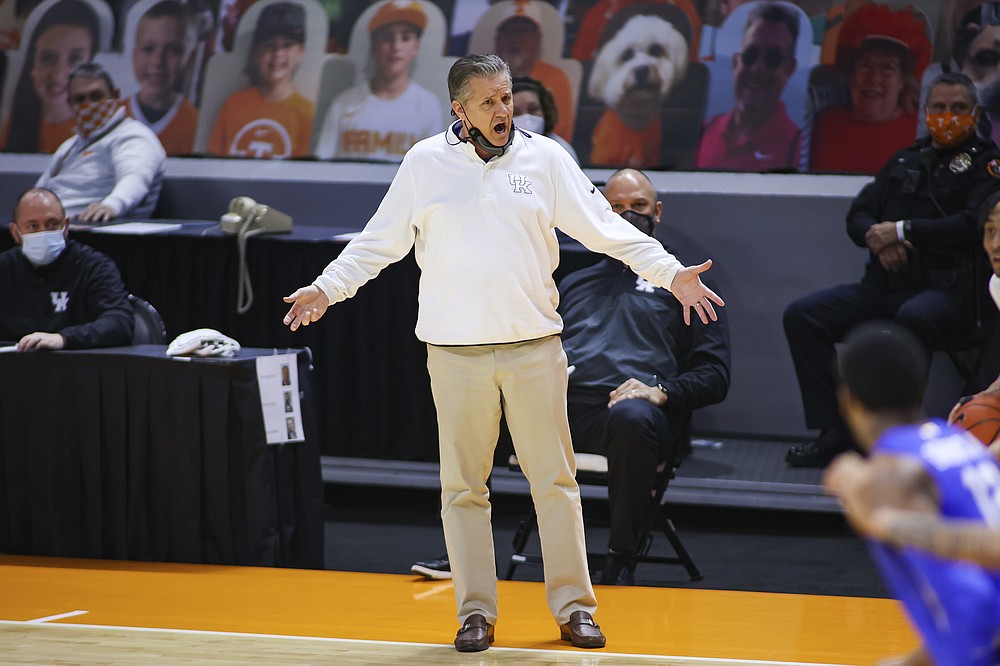