Arkansas lawmakers’ expenses for per diem, mileage and other payments dropped to $1.5 million last fiscal year from $2.3 million in fiscal 2018, according to state records.

That’s largely due to legislative committees meeting fewer times and lawmakers attending fewer out-of-state conferences amid the covid-19 pandemic that officially arrived in Arkansas in March, according to legislative staff members.

For instance, the 2020 fiscal legislative session lasted 17 days, the shortest of the state’s six fiscal sessions, because of the pandemic. That came after lawmakers met in a three-day special session to create a covid-19 rainy-day fund.

For the third consecutive year, Rep. Jim Dotson, R-Bentonville, last year collected the largest amount of per diem, mileage expenses and other expense payments among lawmakers, according to figures compiled by the Arkansas Democrat-Gazette from legislative records.

Dotson served as vice chairman of the Legislative Council and attended meetings of the council’s subcommittees as an ex-officio member, and he was a member of the House Education Committee. That committee conducted its biennial educational adequacy study last year, which is used to recommend how much state aid public schools will get.

Dotson noted he also co-chaired most of the pre-session budget hearings last fall because a few others were in covid-19 quarantine.

“I’m not going to shy away from doing my job just because I’m at the top of the list,” he said regarding his legislative expenses.

Dotson, who is a Realtor and homebuilder, said he still lives in the same house and drives more miles than other lawmakers to attend many committee meetings.

He said the reimbursements cover his legislative expenses in some months and don’t in the other months, so “it all balances out in the end.”

“I am trying to make ends meet to do the work I have been hired to do,” he said.

In addition to their expense payments, state lawmakers are paid a salary by the state.

In November, the commission voted to increase the salaries to $43,064 a year for lawmakers and to $49,815 a year for the House speaker and Senate president pro tempore.

Reps. Lane Jean, R-Magnolia, and Rep. Johnnie Rye, R-Trumann, collected the second- and third-largest amounts of per diem, mileage and other expenses last year at $26,263 and $24,154, respectively.

Jean is a co-chairman of the Joint Budget Committee and noted he serves on the Legislative Council and a handful of subcommittees as well.

He is one of six lawmakers who have been serving on the state’s 15-member Coronavirus, Aid, Relief and Economic Security Act steering committee that recommends to Gov. Asa Hutchinson the best uses of $1.25 billion in federal aid. The Republican governor appointed the steering committee.

“We were meeting two days a month,” Jean said of the CARES Act steering committee.

He said he is typically among the top 10 lawmakers in legislative expenses. Legislative leaders generally attend more committee meetings.

Rye, a retired Poinsett County assessor, noted that he is vice chairman of the Legislative Joint Auditing Committee’s City and County Committee.

He said he attended the meetings of the Joint Committee on Public Retirement and Social Security Programs last year, though he’s not a committee member, because “I have a lot of calls from the schools and county officials about retirement legislation.”

“A lot of times, you have to make two trips a week,” he said.

Sen. Lance Eads, R-Springdale, collected the fourth-highest amount of expenses among lawmakers and the largest amount among senators last year at $23,396.

He said he serves on the Senate Education Committee and that “we had quite a few meetings [on] educational adequacy” last year.

Eads, who is the vice president for government affairs for the Springdale Chamber of Commerce, said he also serves on the Joint Budget Committee and the Legislative Joint Auditing Committee.

He said his mileage reimbursement, based on his 400-plus-mile round trip, adds to his legislative expense tab.

It has been nearly six years since the seven-member Independent Citizens Commission — created under Constitutional Amendment 94, approved by voters in November 2014 — boosted the salaries of lawmakers from $15,869 a year to $39,400 a year and those of the House speaker and Senate president pro tempore from $17,771 to $45,000 a year, effective March 29, 2015.

Before Amendment 94, the Legislature set the salaries of the state elected officials.

In exchange for the pay raises in 2015, the Legislature enacted a bill to eliminate lawmakers’ eligibility to receive up to $14,400 a year in certain office-related expenses.

Generally, the longer the session, the higher the costs.

Lawmakers’ total per diem, mileage and expense payments dropped from $4.02 million in 2014 to $2.3 million in 2016 and 2018, before falling to $1.5 million in 2020 amid the covid-19 pandemic, according to figures complied by the Democrat-Gazette based on legislative records.

In looking at years with regular sessions, which are longer than fiscal sessions, total per diem, mileage and other expense reimbursements dropped from $3.18 million in 2015 to $2.82 million in 2017 and $2.77 million in 2019, according to figures computed by based on legislative records.

Sen. Jim Hendren of Sulphur Springs, who is now an independent but was then a Republican who was Senate president pro tempore, and House Speaker Matthew Shepherd, R-El Dorado, said they agreed two years ago to try to avoid holding legislative meetings out of session during the last week of the month and to have more days with multiple committee meetings the rest of the month. That could be another factor reducing legislative expenses, they said.

The per diem paid to lawmakers depends on where they live.

Lawmakers who live more than 50 miles from the state Capitol were paid per diem of $151 per day last year for meetings in Little Rock and other cities except for Hot Springs, where the rate was $164 per day, said House spokeswoman Cecillea Pond-Mayo.

Those who live less than 50 miles from the Capitol received a lower per diem, $55 per day, for meals and incidentals last year, she said.

Pond-Mayo said lawmakers were paid a mileage rate of 57.5 cents a mile last year. That rate dropped to 56 cents this year, she said.

According to legislative records, Dotson’s expense payments were: 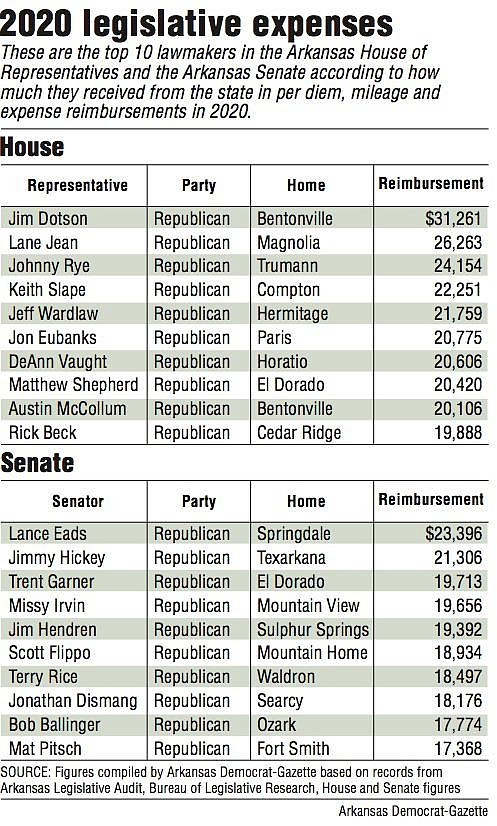