Leaking impairs full use of water 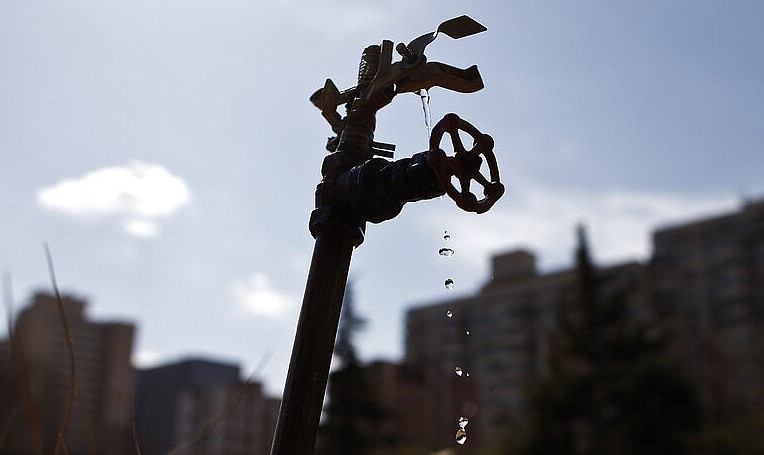 Water is seen dripping from a water sprinkler against residential apartment buildings in this March 24, 2011, file photo. (AP / Andy Wong )

A damaged piece of equipment has been repaired, but systemwide waterline leaks are the culprit in keeping Pine Bluff's water system from operating normally, according to water company officials.

Kelli Price, a spokesperson with Liberty Utilities, which provides water to Pine Bluff businesses and residents, said a repair to a waterline at one of three water plants serving Pine Bluff was made Friday night.

"It helped the water pressure slightly, but the much bigger issue is possible broken and leaking waterlines at homes or businesses," Price said. "Our team is working 24-hour shifts and is patrolling the community looking for waterline leaks and breaks."

Price said water use in the city is significantly higher now than what the utility normally sees.

"We continue to experience increased demand -- nearly double what is typical," Price said. "To put it in perspective, we typically see demand at 7 [million] to 9 million gallons a day this time of year. We are currently seeing demand in excess of 15 million gallons per day."

The utility started experiencing a drop in water pressure Thursday afternoon. In response, it posted a statement on its website saying that the system's pressure was nearing the point at which a boil order would be necessary. As long as there is sufficient pressure in a waterline, contaminants can't get into the system. But if the water pressure drops too low, those contaminants can make their way into the waterlines and any water for consumption would need to be boiled first. As of Saturday evening, however, no boil advisory had been issued.

The loss of pressure also had a significant impact on Jefferson Regional Medical Center and the University of Arkansas at Pine Bluff. At the hospital, the water pressure became so low to the boiler room that on Thursday evening, a firetruck and then a water truck had to be brought in to pump water into the system so the hospital could continue heating its buildings.

All surgeries were canceled Friday, although by Saturday afternoon, emergency surgeries could proceed, said Wendy Talbot, chief experience officer at the hospital. Talbot also said the Urgent Care facility across the street from the hospital was back in operation after being closed for a time.

"Things are about the same as they were yesterday," Talbot said at midafternoon Saturday, following a call with city and county officials, Liberty Utilities officials and hospital executives. "When they got the plant up last night, we saw a little improvement, but then it went back down."

Talbot said the hospital was getting water at a pressure of 24 pounds per square inch, but optimally, the pressure should be twice that. On patient floors, she said, there is water, but not much.

"It's major," Talbot said, quickly adding that the staff was working 24-7 to stay ahead of the problems the water situation was causing.

"We're doing everything we can on our end to hold things steady," she said. "And after being on the call, I can say that the city and county, everybody is working together and coming up with disaster plans to get this remedied. Everyone is ready to assist."

At UAPB, water and heat were limited, forcing the university to move students in some residence halls to hotels in Little Rock, according to a news release issued Friday night. The UAPB campus was closed Friday because of the problem.

Liberty officials said they appreciated the efforts being made by customers to limit water supply and to call in when they saw a leak.

"We have not found any main waterline breaks at this time," Price said. "However, we are finding leaks and breaks, many of these at vacant homes and buildings.

"We urgently ask that our customers report any running water on sidewalks or streets. We realize it's challenging with melting snow, but our teams can investigate to determine if repairs are needed. Please call our emergency service line at 1-855-382-6511."

The utility also asked customers to check their own lines for leaks or breaks.

"If damage is discovered, customers should turn off their water at the main valve/shut-off and call a licensed plumber for assistance," Price said.